I have seen several posts of people asking about using 12" inch shafts from middle/high school VEX on VEX IQ bots.

My guess is that you want to connect 2 motors on the same shaft to have them move together at the same time. If that is the case, we got the two biggest shafts we found on the VEX IQ kit, we firmly secured one of them in one motor, then we secured the other one to the other motor and we use a piece that kinda looks like an spiral and joined the two shafts by placing it between the two shafts.

We appreciate your feedback on this, and will take this into consideration for the future.

For non-competition uses, the VEX EDR 12" shaft is fully compatible with the VEX IQ system.

That spiral looking thing is probably a worm gear from the Gear Kit. Love all the parts that come with the kits…

Yes it is the worm gear… sorry my English ain’t that great and I’m not an engineer either… just a dad helping out the kids.

Not a problem, Kaverman. I’m not an engineer either, just someone having a blast with the robotics kits. I so wanted to get into this kind of stuff since I was a kid, now I can afford it a little better… LoL.

Yeah, when I was a kid my dad never had any of this stuff for me around. My first kit was a Lego Mindstorm.

I can’t wait for next year… my son will be middle school next year… can’t wait to see him working with metal robots and burning some motors.

Does his school use VEX or Lego? I’m going to have to start saving up for Vex parts next. I’ve got enough VEX IQ parts to last me for a few more months… LoL. I think that my next purchase is going to be a single seat version of RobotC so that I can start learning how to program my brain. I’ve seen a lot of robotic vids on youtube with real time video cameras, that would be pretty cool as well. I’ve looked at the website for Marine Advanced Technology Education as an area that I would like to explore for an option. I would like to get into the search and rescue type of robot, either aerial or ground based. Lots of possibilities that would only be limited by the imagination.

Before VEX IQ the school used LEGO Mindstorms (elementary) and VEX (middle and high). Now they are on VEX IQ (elementary) and VEX (middle and high), but I’m going to talk to the organizer of the event here in Puerto Rico to see if they include a middle school division for VEX IQ next year cause some kids from other schools have expressed interest in staying with VEX IQ, my kid said he would like to do both if they are available. They are programming on RobotC.

My kid was telling me that he was interested in taking some classes with a friend of mine, cause he teaches robotics with (VEX and FIRST), submarine robots, game programming and phone apps development and he was interested in all of those topics. He also teaches kids how to make solar powered bikes and stuff like that.

If you are looking for a primer for your son on underwater robotics, this is a great book to start with. MATE also has a classbook that would be worth investing in also, but it costs more. 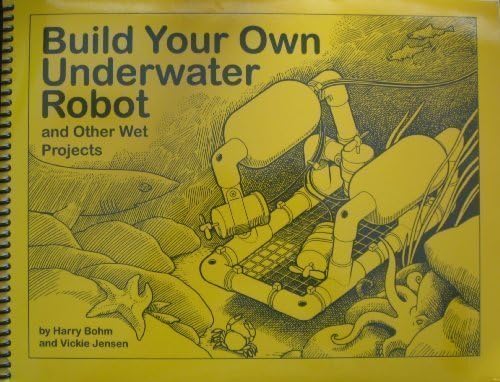 Build Your Own Underwater Robot and Other Wet Projects

I showed him the link of the book and he will be ordering it this weekend. He will also order the SeaPerch kit to build the underwater robot. Next school year he will be in middle school, so he has to leave VEX IQ and move on to the VEX platform. He plans to start working on his SeaPerch project just after the world competition, so that when school starts in August he can focus all his energy and time on his VEX robot.