Over the last few weeks I set myself to work on recreating 2114X’s infamous TT robot in CAD. Personally it is one of my favorite robots made in VRC, having really tested the limits of TT. I thought it deserved an accurate cad recreation, in addition to the already well made explanation video. 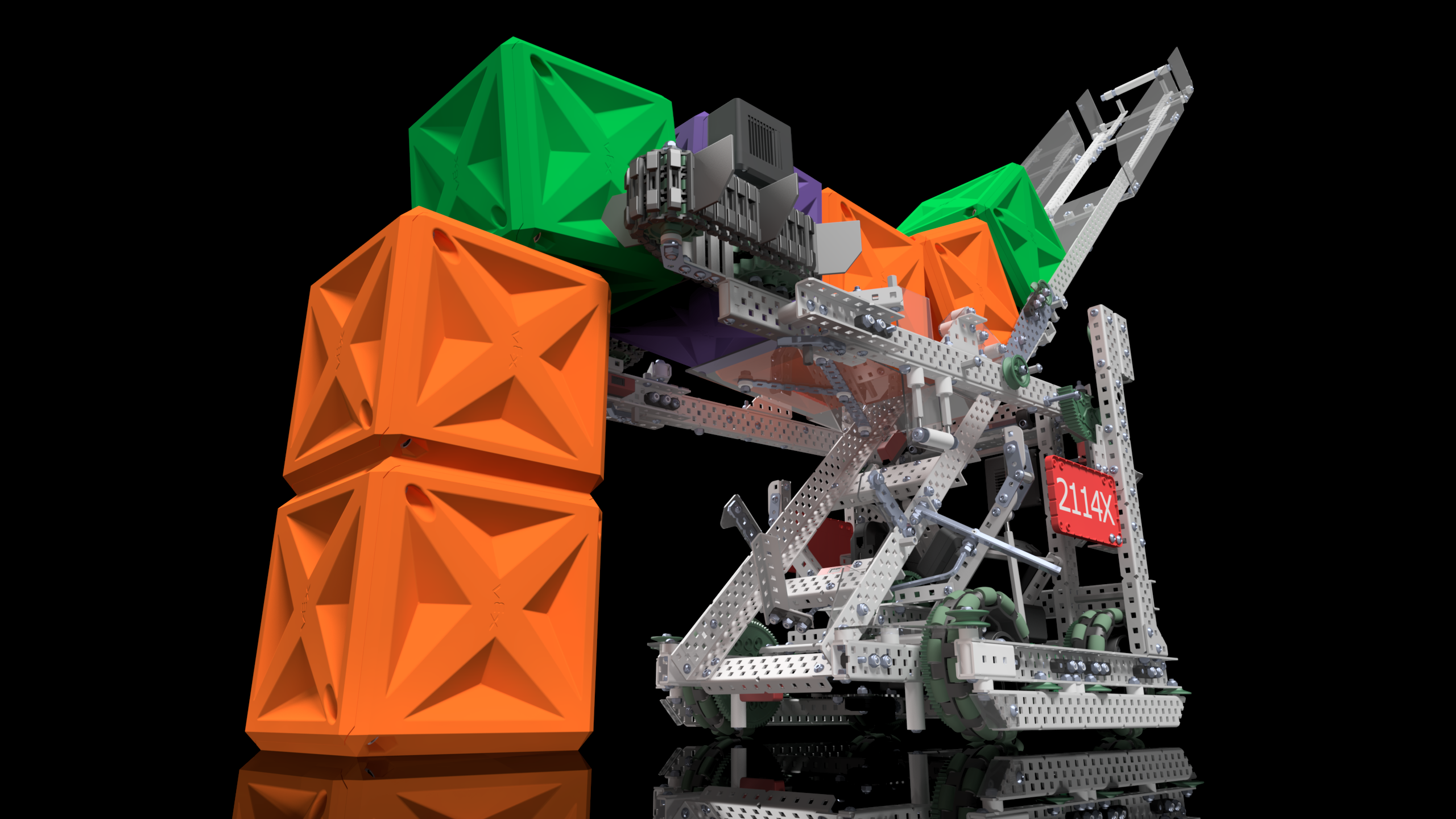 This would not have been possible without the help of Tilden with a few areas that were not clearly shown in the video, allowing me to make this as accurate a representation as possible.

Special thanks to @vexreally for their high quality renders as always. 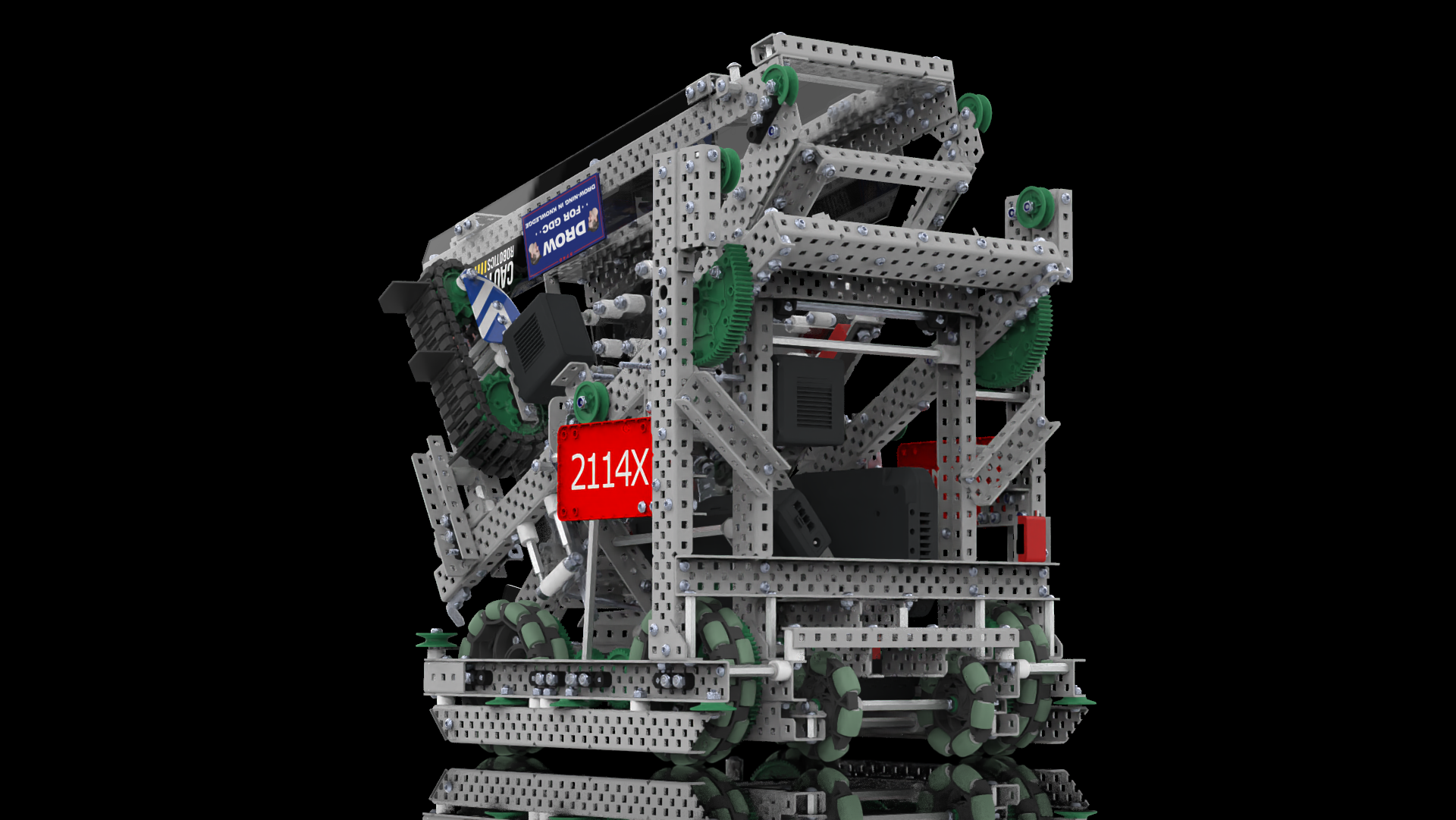 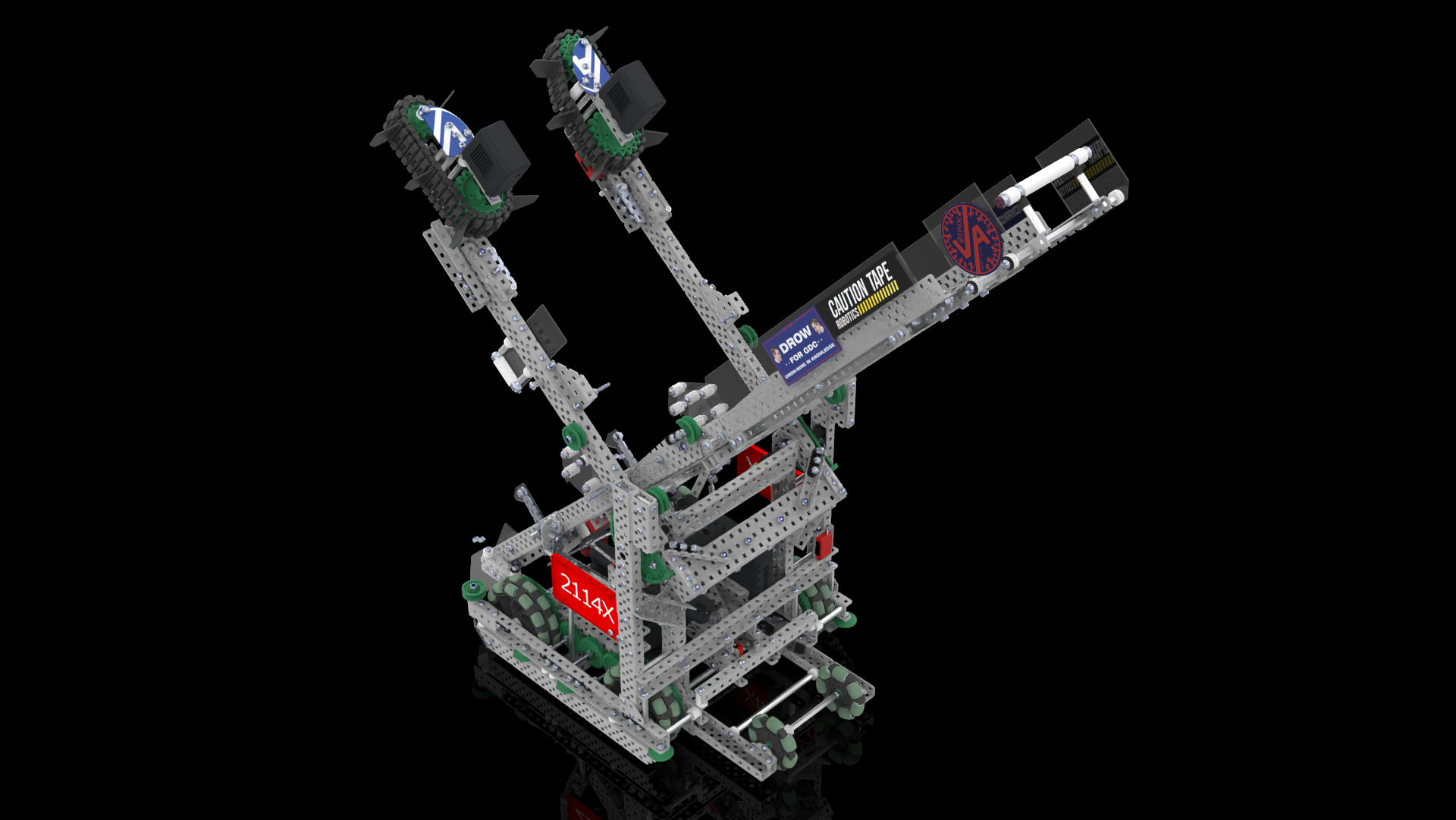 This was also one of my favorite robots from TT, and I’m glad someone took the time to CAD this. I will say, this is by far the most accurate CAD of a robot I’ve seen. You even added the stickers!

Side note, in the explanation, the omni wheels on the anti-tips were cut in half. Was this a previous version of the robot?

You know you are good when someone on the forums cads your robot for fun 2 years later.

Thank you, and the antitip wheels on the cad are half cut.

Another question about something I just noticed, why are the intakes asymmetrical in the sense that the left intake has triple chain sprockets while the right intake only has triple sprockets but not triple chain? What was the intent behind that?

Some of the renders are missing the additional chain on the right intake. This is because when I exported the file for rendering I had turned off visibility for the right intake while I was making the left and forgot to turn it back on.

The assumption was that nobody would notice, the .stp file has been fixed to show both intake chains though.

The assumption was that nobody would notice,

Some of the renders are missing the additional chain on the right intake. This is because when I exported the file for rendering I had turned off visibility for the right intake while I was making the left and forgot to turn it back on.

While that may be true, the explanation video was also missing chain on one of the intakes which is why I was surprised by how accurate the CAD is. I assume it had something to do with tuning compression but maybe it was just a mistake

The reason the chain was not on all three sprockets is we were working on the intakes and then the season came to an end. We wanted to show the intakes for the video so we just put on the main chain.

Also great job @Gameoa it is an amazing cad model.

wait… was that a drow for gdc sticker?

Sorry to bump this, but I noticed that this robot has pulleys at the front of the base, and I’ve noticed several other base designs that have those. What is the reason for those?

Helps when moving/lining up against the field wall when they would place stacks down, as far as I know.

The main purpose of adding an outer support channel is to help prevent twisting in the pod itself when there is added weight to the base. without them, the pods will start flaring up as it is used more given there isn’t anything supporting the outer flange except standoffs. An easy way around this is to either design and fabricate custom lexan gussets to help sandwich the outer and inner channels of a pod or to drill holes in the bracing c-channels in order to allow holes to line up. Examples …

There are some on the back. Is it for the same reason?

I cant imagine a use for those that would apply to all X-drive robots, I assume it is just specific to the robot which ended up being designed on that drive. The pulleys on 2114X however were solely used (as far as I know) to slide against the wall easily for alignment.

I keep on seeing this on tt robots: why there the intake flaps cut in a corner so they were a pentagon?

I know many teams started doing it so that they could drop the intakes above the preset field stacks in order to make higher stacks during auton. If the flaps weren’t cut cubes couldn’t go into the intake from the bottom as easily.

This is especially true in 2114X’s place as they had plans to make autons which intake the vertical stacks at the start of the match.