Thinking of trying to have the kids build a new drivetrain and trying something new. Goal is a better handling/turning control out of the robot. Before doing so, just wanted to get general feedback to see if it’s worth doing or not.

My thought was power the front two wheels each with their own motor, so no connection/power to the rear wheels ( So basically a FWD). That would be the drivetrain setup. I would then power the rear wheels with one motor via a differential. Likely 2:1 gearing for all the motors. Likely code it in codeblocks that when either joystick is in up or down position, spin rear motor/ wheels.

Just looking for thoughts on if this is a feasible solution or if I’m just going in circles. I know everyone is all PID right now, but looking at other ideas to explore and teach.

I have never thought to try this, and although I don’t think it will work better than a standard drivetrain, I don’t think you are going in circles either. I’d love to see how it turns out. 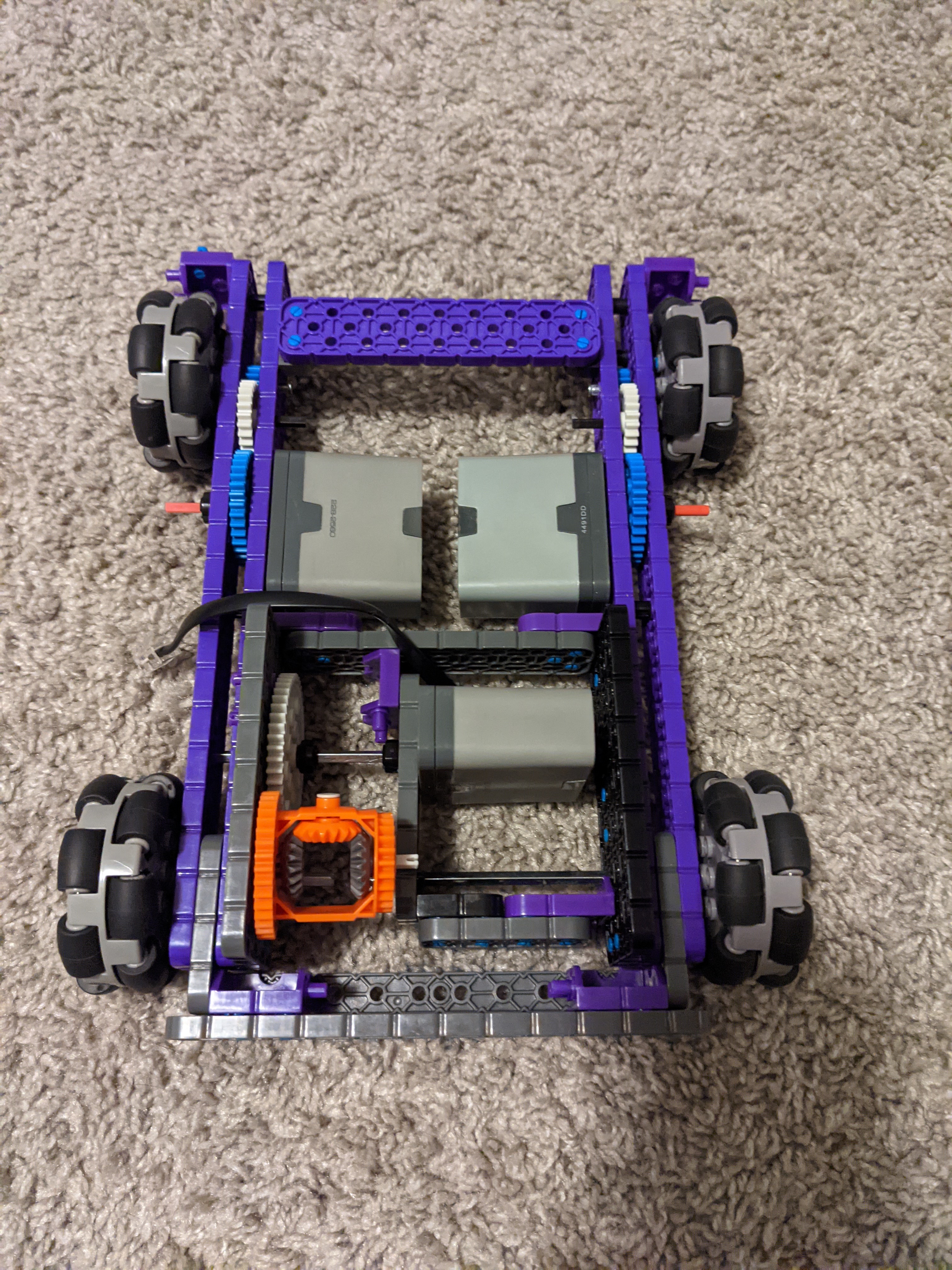 Here is the start. We just use an old robot drive train, front wheels are geared three to one. I have the differential set on the smaller side powered by the 48 tooth gear. What we are struggling with is how to keep the drive shafts inside the differential. There’s not much room at all in it, I can squeeze a rubber collar onto the end of each drive shaft, but if you so much as bump a wheel or something it always keeps coming out. I have all the pins that are included in the kit, which that seems to hold the side bevels, but it’s a square plastic piece on the side and I’m not sure how I can get that to hold to a drive shaft.

Nice start!
I might try to fix your problem by moving the differential closer to the wheel, perhaps adding another beam between the gears and the main base wall, and shortening the distance between the motor and the gears. Then you should have room to add a shaft collar without it popping off.
Also, I might try to add some supports for your 2 motors in the front- they appear to be bending down. A beam underneath it should do the trick.

@VexTeamZ Thanks for the feedback! The drive shaft we have are plenty long. Just to make sure we’re doing it right, we have two driveshafts meeting in the differential, one coming in on each side connected to the side bevels. We have room to slide a collar on each of them in the middle. The problem is bumping the wheels or any slight pulling, the drive shaft comes out a little bit, with the bevel and collar coming loose and off.

Looking at the sample built on the product page on vex’s website, it didn’t look like it had a drive shaft sticking in them, so that’s why I was seeing the right way to get things to stay together and work. There are 1x2 iddler pins that come in the kit and was seeing if that’s used in any way (we used a 0x2 iddler pins for the middle bevel).

Thanks again for any feedback!

To fix your problem with the shafts coming out, I would try not only putting the shaft collars on the ends of the shaft in the differential, but other places a well. Also, the reason your front drive motors are bending in is because your drivetrain isn’t rigid enough, and by making your drivetrain more rigid, you will probably also help solve the problem with the shaft collars coming off. Also, I do think that this idea could have a good potential.

Also, could you post some pictures with views from other angles? I don’t have a differential, so I can’t do what you did, but I am curious what a side view looks like. Thanks.

@FRC973 here is a couple pictures of an updated build. The first few pictures we didn’t really put everything together tightly enough just as we’re still figuring things out, but this looks to be more of a final build. I did have a 48 tooth gear powering the rear differential to the 24 side, but the 48 sat so low that I had to switch to a 36 tooth gear and I just powered that on the 36 side so it’s a one-to-one gear ratio on the back. We also dialed down the gear ratio on the front wheels from a three to one to a two to one. hopefully the two different gear ratios between the front and back won’t make a difference, but I can always go back and put the 48 tooth back on for a two to one ratio if I need to.

I’ll work on adding the brain and then coding probably tonight a first thing in the morning. Thanks for the feedback! 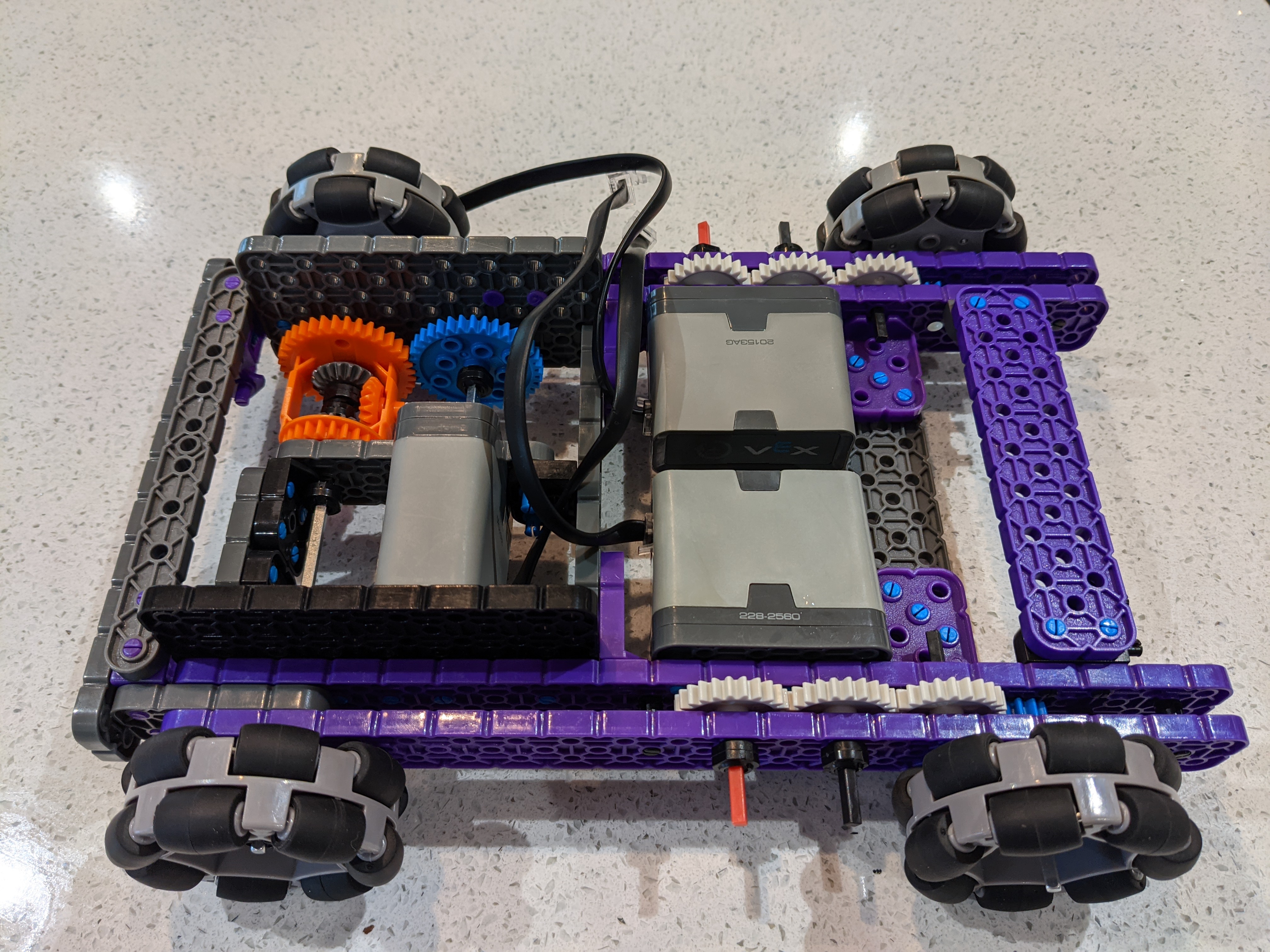 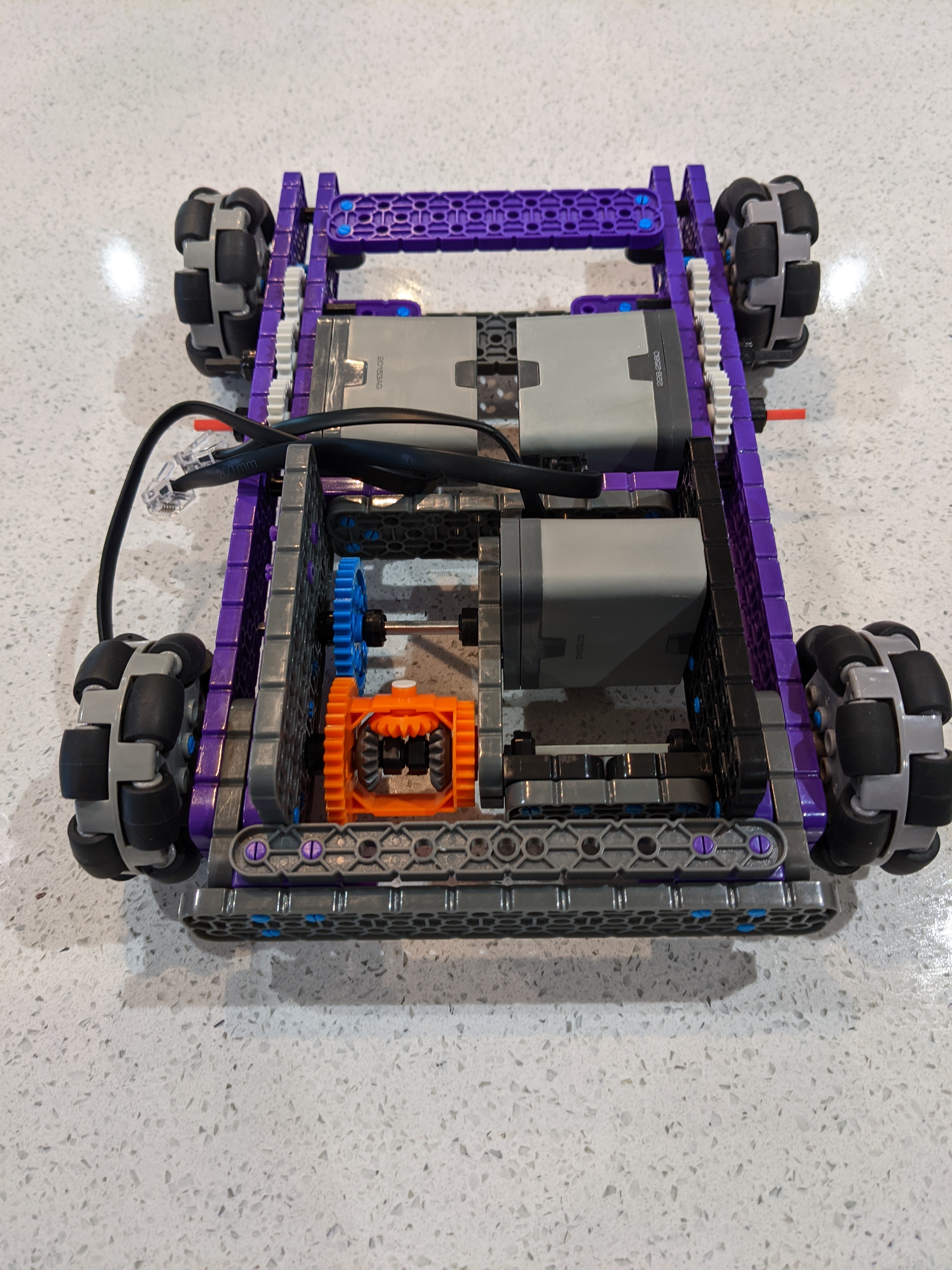 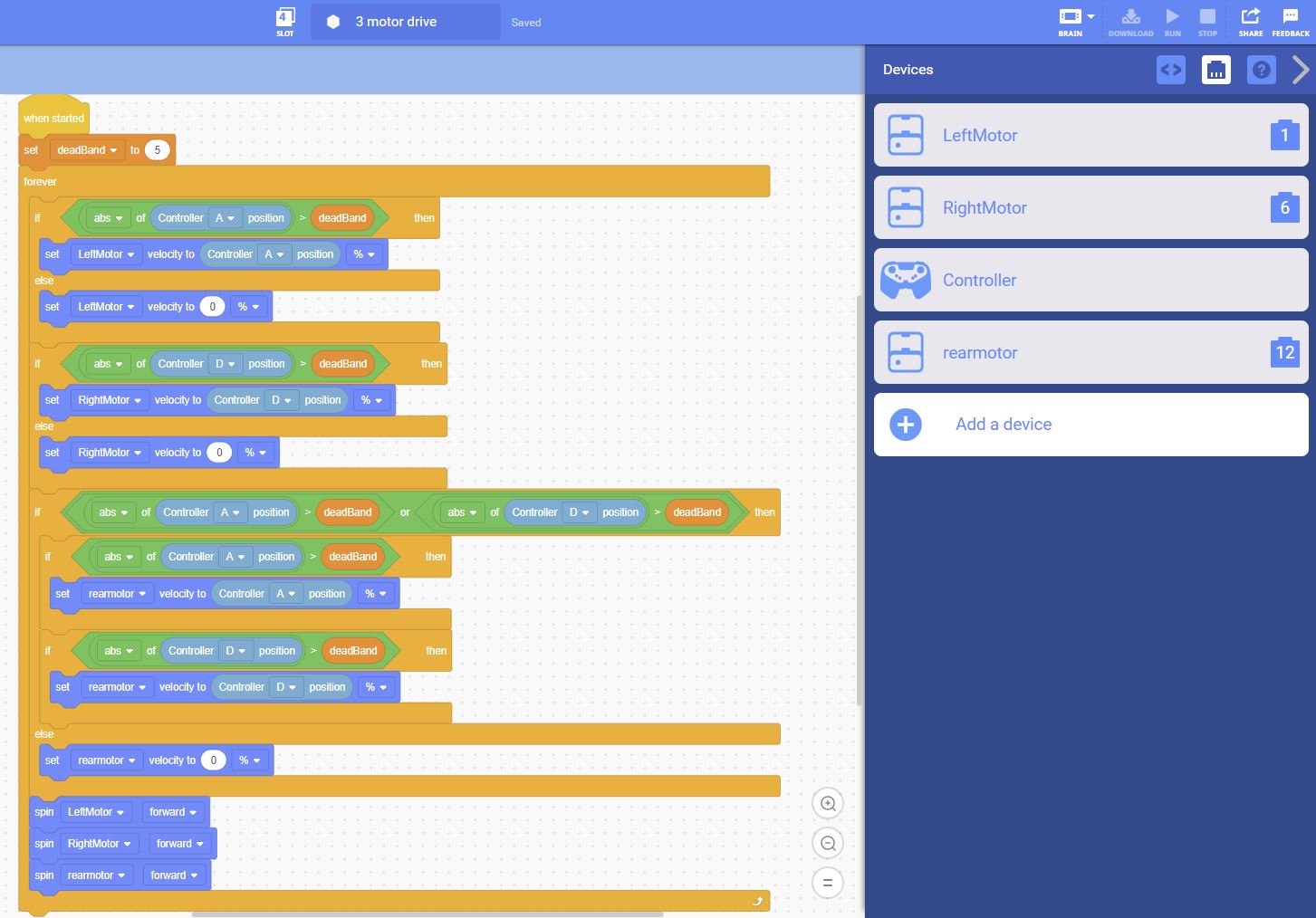 here is the sample code we used. The kids do a tank drive, so i copied the example block and added logic for rear motor. Tested it and everything works.

First test run obviously shows everything works, but felt sloppy. Makes me wonder if both the front and rear should be geared the same, so i’m going to swap the differential around and power the 24 tooth side with a 48 tooth gear so they are all 2:1. Also, I had omni wheels for all our wheels. debating if i should make any of them the stock ones. (taking comments from the peanut galley for that

). I’ll do some more tinkering and post a video tomorrow.

I’ve done something like this before but you can just have all three motors powering the rear wheels and then connect them to the front as you usually would to make it 4wd. It’s been a couple of years so I don’t have any pics or anything like that. I really would try to use all-metal shafts on your drivetrain as well, especially where the motor and wheels are.

I would gear everything as the same ratio as well.

Also, just set the rear motor to (A+D)/2. It’s just going to do the average of what the left and right motors are doing. I can imagine that if you are turning left or right you get it to be very jumpy as you are setting the rear to +100 and -100 at the same time alternatively.

Here’s how I would do it. (I really don’t like to use the “else” blocks if I don’t need to, they are really… blocky…) 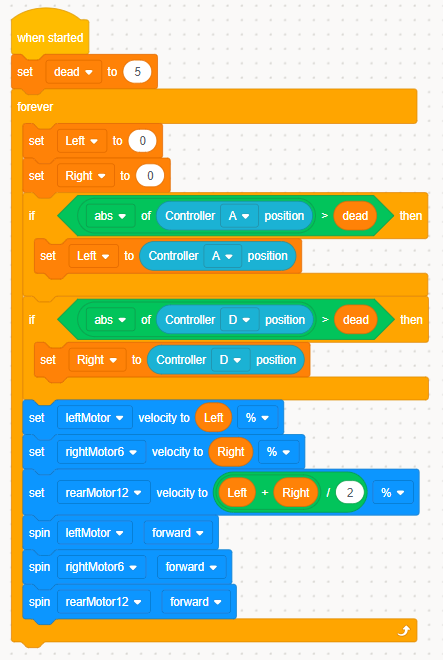 The metal collars with a set screw are not compatible with VIQC.
For a non-competition robot, they would be fine. At a competition, they wouldn’t pass inspection.