Hi! This is my first year doing Vex IQ, and I’ve gotten pretty far. I have a 2 ball catapult, and it’s pretty accurate. My only question is how to get it to store 2 balls at the same time, kind of like spitfire. If I move the catapult back, then it’s really hard for the intake roller to get the ball in the catapult. Also, if this question is in the wrong category, fell free to comment. Appreciate the help!

Hello and welcome to the forums.

As one of the designers of Spitfire, I’ll let you in on a secret: it initially was only meant for 2 balls. The additional 2 balls were kind of a bonus that we took advantage of and refined the robot to use well. The concept is simple, you just store two balls in the catapult and two bubbling in the intake. But the actual implementation can be a little tedious. The key is to get the pieces that direct the balls in the right places. If you generally direct the balls towards the center the intake, the intake should somewhat automatically index the balls. If you post a picture of your robot (the intake part), I could probably be more helpful as I could directly address your robot.

Here’s a photo of the entire robot with the catapult down: 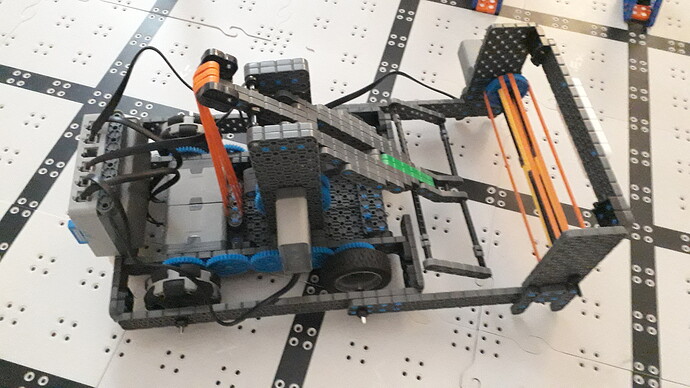 Sorry for the delayed response.

It looks like with your catapult, it won’t be very easily possible to hold 4 at a time without some major changes to the robot. I wouldn’t worry too much about it though, as you can still get a lot of points with just two at a time.

If you were wondering about the details, the secret of Spitfire is the large intake roller with a sort of “wall” at the back, so there is room to store extra balls. Since you have a relatively small intake roller that puts the balls directly in the catapult without bringing them up, is going to be pretty hard to store 4 at a time without changing the intake geometry, and consequently the catapult at well.

However, if you want to try something that might work, you could try adding (a) rubber band(s) to the bottom of the intake as seen in the picture below. This will hold the second two balls just off the ground, and if you put them in the right spots, it might be enough. There won’t be much room for driver error though because the intake roller is so small (you could slow down the roller when it goes backwards if this is a problem), but you could give it a try. 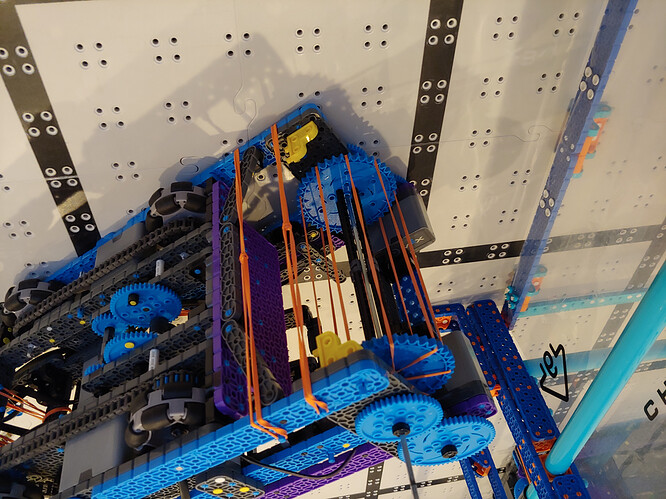