This weekend I attended my 3[SUP]rd[/SUP] State VEX competition as a parent and observer.

All the competitors were excited because there were 8 opportunities for 48 teams to make it to Worlds. 2 of the Winning Bots won 2 more judged awards? This eliminated 2 opportunities for other programs to attend Worlds.

Additionally the host school won 4 awards? And why is the States host school always the same? shouldn’t it be on neutral ground like a University? or at least moved to a different school each year? In the end 4 Bots from 1 school taking 6 spots and 42 teams going home disappointed.

If the same teams won multiple awards then they doubled/triple qualified. That normally means that they will get just one invitation and the extra invitations would go to the first teams on the Worlds Skills Scores list from that state, so your State gets all 8 spots for unique team numbers. For instance, last year we were fortunate and triple qualified with STATE Tournament Champion, STEM and Skills. We were given one invitation and two other teams were picked off of the State skills list.

It was different this year, and new to me, we double qualified with Skills and Amaze so we were given one invitation and another team came from the State skills list. However, we elected not to go to World’s so turned down our invitation. In that case, that spot no longer stays with the State, but goes into general use (how I don’t know, maybe wait list)

Is it common for teams to give up world invitation?

Teams that can’t get school permissions / get funding to go often return their slots. This is why they want you to confirm you’ll go by the middle of March so they can invite more teams.

@saltshaker We are a private homeschool team. Our families spent $20k+ going last year (4 teams), and have been fortunate to qualify with all of our VRC and IQ teams each year for the past 4 years and attend. All the $ went up this year for RECF, we are going to take a break from it for a while. We can fund an entire team or two for an entire year just with the cost of Worlds, so we are choosing that option and maybe picking up V5 hardware (VRC) with the $.

“Awards Overview Awards are to be spread as equitably as possible among the teams, with no team winning more than one Judged award. A team should only win additional awards if they are for robot performance (Teamwork and/or Robot Skills awards) or if there are no other qualified teams. Individual awards given to coaches and mentors do not affect a team’s eligibility for a Judged award.”

Examples of this may include: • Robots built entirely by adults or, in the case of younger student, mentors (i.e., high school students building robots for elementary or middle school teams). • Identical robots on two or more teams (so called clone-bots). • Adults who criticize students from alliance teams for poor performance, failure to perform optimally or who blame other teams for low scores rather than offering positive suggestions.

REC should look over the code for all teams - but especially where one organization has multiple bots and teams that are within 10 skills ranking slots of each other. 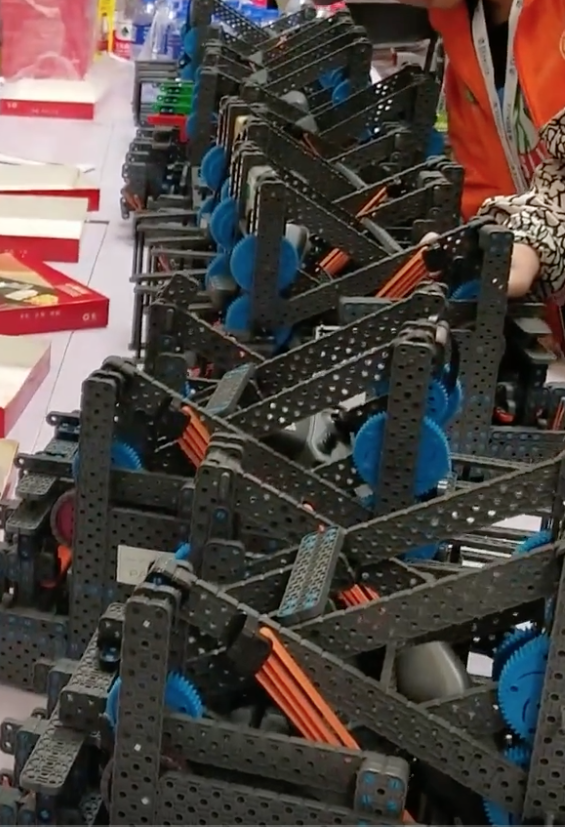 Did ALL of those bots even use the same gear ratio?

Ummmm, the clone bot rule doesn’t make me happy, since I’m sitting on a small army (8 groups, 40 robots) that all but 3 look like Stretch. The other 3 look like clawbots. While they were all built by elementary school students, they were designed by top robotics engineers.

It turns out that if you build a robot from plans to help with understanding of how the parts work and go together, they become overly attached to them. Some have made minor upgrades (longer arms, longer bases, 20 more rubber bands on the claw) but at a distance they are all the same.

This is a common problem with VEX, all robots converge into 2-3 designs.

I think if the judges have some experience with VEX robots, and they really inspect the bots carefully, they should be able to tell whether they are clone bots. Even for bots following a genuine design, there will be plenty of different implementation details if they are indeed built separately.

Ummmm, the clone bot rule doesn’t make me happy, since I’m sitting on a small army (8 groups, 40 robots) that all but 3 look like Stretch.

I don’t think those are “clone bots”. They are “stock” robots.

In my opinion, neither should be eligible for the design award (or judged awards), but the stock bots should be allowed to win Teamwork or Skills.

So they document the game play, decide their strategy is dump the 20 and then pull the starting pegs off and put them on the vertical goals. Decide that Stretch is good. Use stretch, decide that the arm needs to be lengthened by 2", because it’s now pretty tippy they make the base longer, extending the drive by either 8 gears per side or chain drive so the front wheels also drive. Next iteration is to remove the front solid wheels and replace with omni’s to get better steering.

Is it now eligible for the design award?

At what point do they cease being “stock bots” and become custom bots?

At what point do they cease being “stock bots” and become custom bots?

As soon as they change the design of the robot. Changing the claw would count.