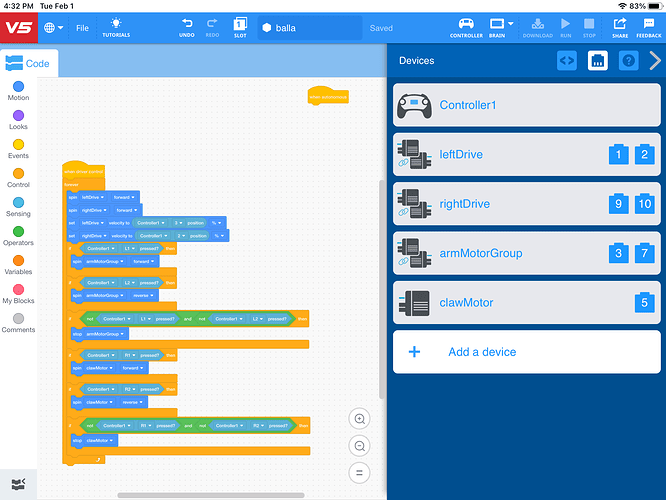 image2160×1620 293 KB
Our drivetrain is complicated so im having troubles programming if anyone can help. I’m probably going to explain this poorly but we have a a drive base in which both sides have 2 motors each but the front wheels have no motor, in other words we have two motorized wheels controlled by 4 motors. We cannot use a 4motor drive base under devices though because the way the gears are placed (no picture of robot sorry) on each side has one motor that needs to be reversed and one that needs to be not reversed, it’s dumb but compact, and one individual motor under the drive base can’t be reversed. In our driver program above you can see our working code, but problems occur when we introduce an autonomous program, because we don’t have access to a drive forward command, and currently the only way we score points is setting sides to a speed, waiting, and then stopping. But this makes one side start before the other, and we also don’t have much control over distance. If anyone has suggestions to reduce this problem it would be greatly appreciated. On a separate note does anyone have tricks to avoid getting caught on rings? We’re constantly getting stuck and have no solution yet. Thanks!
insert_code February 2, 2022, 1:14am #2

I have no idea about the code but most teams use some sort of hard non shatter plastic, you can find a sheet of this for about $10 and it helps a lot with rings.

I’m pretty sure you can make a drive train function and not just a group. it will give more commands for autonomous an ease the amount of code needed for driver

If you switched to VexCodePro you can customize the drivetrain to your design which means you can take advantage of the Drivetrain features but you will lose the blocks programming.

Another option would be to do a gear train and link both rear wheels and have the motors work in pairs (utilizing gears spinning in the same direction).

Regardless if you add one more gear then both motors spin the same direction and you can use a 4 motor drivetrain which is much simpler.

That sounds helpful, can i get this on mobile? I’m working on an iPad because that’s what’s provided to us by the school but i might be able to find a chrome book

I don’t believe so. May have to use the gear option.

I think that Vex code Pro is only available on Windows/Mac devices, which means that you can’t get it on a Chromebook either.