Next year the game field increases from 4’ x 8’ to 6’ x 8’. How big of an impact will the larger game board have? Reason I’m asking is we have a 4 x 8 field permanently attached to a wooden platform. Debating whether to buy a whole new board or just go with 4 x 8.
Thanks

Funny you asked. I was wondering the same myself a couple days ago. So I have been an EP a few times so I decided to look into this.

I already had several boxes for IQ fields so I put together a 6x8 and here’s what it looks like. I have a speed build bot on the field for scale understanding. Two boxes make a 4x8 field. Using a third box to accomplish the expanded size left me with 2 extra corner pieces and 6 straight side pieces.

From the pics you will see what it looks like. 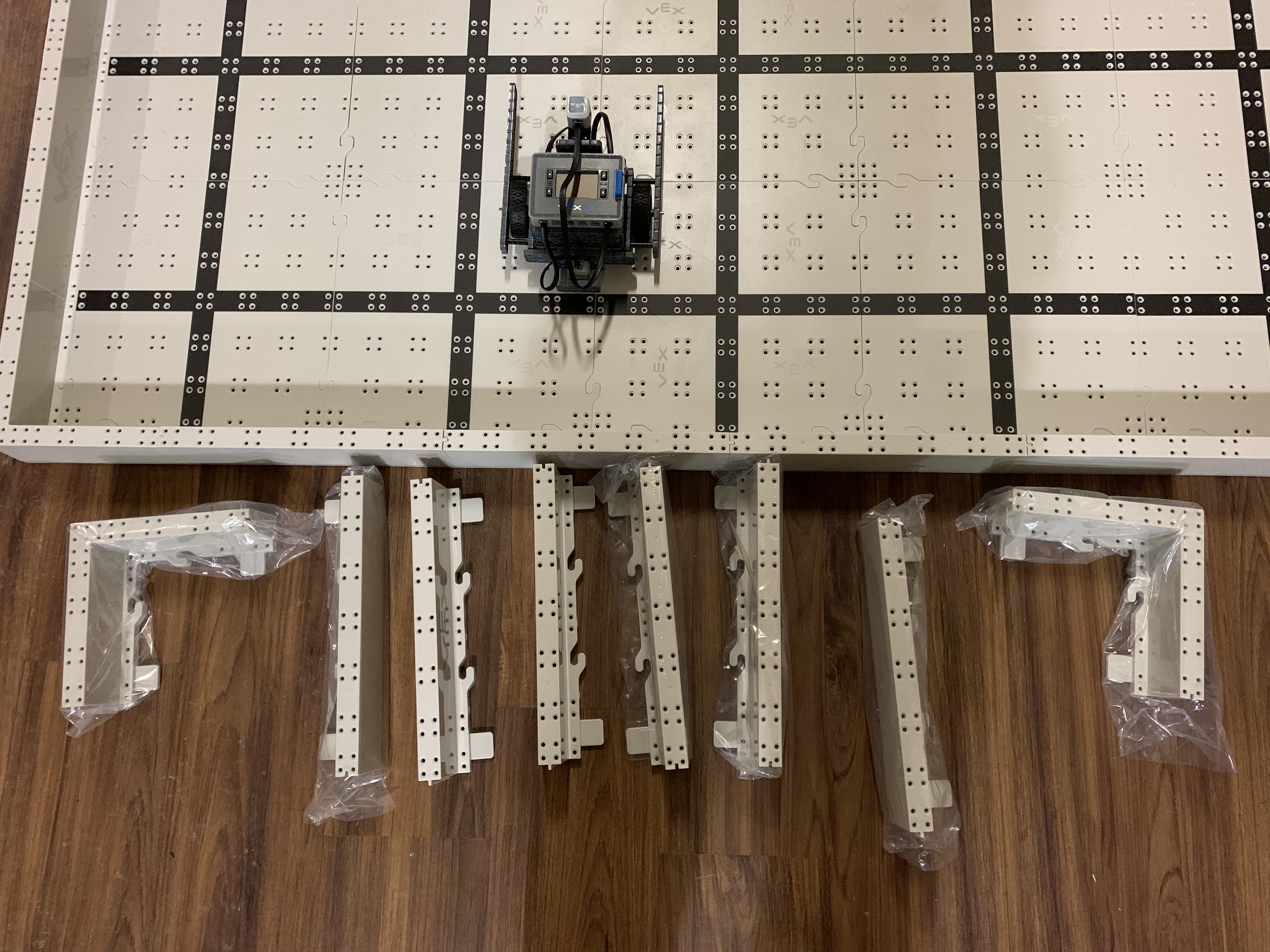 It WILL DEFINITELY have an impact on the programming aspect and game strategy as well. Would matches still be 1 minute long is my question? I would think matches would be longer since a bigger field would require more travel time.

Will be fun to find out!

One thought that crossed my mind is having 3 robots on the field at a time. This would allow events to handle 50% more teams with the same number of matches or handle the same number of teams with fewer fields. One of the issues in Indiana is having enough events for all the teams to be able to compete multiple times. Indiana has 1230 elementary IQ teams and 603 middle school IQ teams. After all the events in late January and February went way over their initial planned capacity it still came out to an average of 2.5 competition spots per team. Many teams were only able to attend one event because everything filled early and they weren’t on top of watching when registrations opened. Just one of many possibilities with a larger field.

To add on to that — maybe 4 ? Since IQ is smaller than VRC, this could be possible as well. Maybe even lead to some Head to Head competition between two alliances at IQ level. While exciting, a big part of me hopes not. I like instilling the value of working together first.

I want the next few years to be the bigger field and 2v0. I want RECF GDC to show that they were really hampered by the smaller space.

I never want to see 1v1 for VEXIQ. Not thrilled about 3v0.

Just a note that the fields are 50% larger, so if at maximum capacity for tables now, you’ll have fewer tables at the new events. I expect my current 6 will shrink to 5 and maybe 4.

I agree, I don’t want to see head to head competition with elementary students!

I never want to see 1v1 for VEXIQ

Not thrilled about 3v0

Just a note that the fields are 50% larger, so if at maximum capacity for tables now, you’ll have fewer tables at the new events. I expect my current 6 will shrink to 5 and maybe 4.

Thinking about our local events, I think we will be ok… they were generally 2 competition fields for MS and 2 for Elem so I think they can absorb the space.

I am hoping the increase in field size is so they can have more interesting elements and more fun and challenging games and not because they want to have 3 teams on the field at once. Squared Away was a really great game (we will not talk about RSC5) that brought out multiple strategies and approaches, including multiple types of robots. But the field was really crowded. So, I’m hoping the GDC would use the extra space for creative and challenging games.

The 2 team cooperative alliance format works well in IQ (say what you will about seedings in the Finals, but I wouldn’t want alliance selections for elementary school kids).

So say some more about Squared Away on the bigger field. Would you have the same layout? More balls?

This is going to be a matter of preference. For me, I would leave SA the way it is on a 6x8 field. We are only gaining 2 feet in width… that means 2 extra 12"x12" squares between between the robot and inverted green cube (or space out the distance between robot and green cube, and green cube to low platform)… not really a whole lot more spacing. For teams that had big robots (our team’s robot maxed the allowed dimensions) their lifts were like only 1 inch in front of the inverted green cube, and probably had to coordinate really well to avoid entanglement with each other.

Or the extra space could be used to incorporate 2 games together… like SA and NL… put the hanging bars in the middle and provide points to hang… plus it would’ve “resolved” the RSC5 issue.

The only thing I didn’t like about SA was the fact that the high green platform was worth the same as the low ones… The high one should’ve been worth 25 or 30 points considering the added challenge.

Maybe we will see more options where the robots have to collaborate to score. There was one game where they could balance a ramp?

Maybe scoring elements that are too unwieldy for one robot given size restrictions, so they have to coordinate to move it, or a scoring position has to be help open by one robot while the other puts elements in it.

There was one game where they could balance a ramp?

That was a fun game. I reffed more than one match (early season) where one team wouldn’t let the other team onto the ramp, thinking they would “win” if they had the ramp to themselves. Maybe a bit more RTM would have been in order!

I think the beauty about IQ is the current field size which fits in a classroom a bigger files get much harder.

IQ is about teaching kids one of the core fundamentals about engineering - a great engineer collaborates, shares, and knows that collective knowledge wins always over individual knowledge (control).

IQ should always have a collaborative element - the bridge was brilliant, I can think of many other game elements like that none of it require bigger field, or any other format.

I feel this change is all driven by a few adults who are all about the ‘win’ and worlds - but we should really focus on fundamental deep engineering skills- design, programming, teamwork, unexpected on the spot collaboration to problem solve

By the way want to make is more challenging for those supposedly students who have outgrown IQ, do VRC game with double IQ field and all IQ parts and see how that challenges them…

For another day but consider running a none RECF competition based league ie your own in school or with some schools together and see the fun and enjoyment go through the roof… none of that needs different field size hack build your own game if you want - anyone tries IQ soccer league yet or basketball? It is huge fun and no RSC5 crap or adults building bots and fronting kids… maybe we need to get back to what it was / is supposed to be fun learning for the kids and adult volunteer

i agree with the sentitment of the other things you have said, but I’m interested in better understanding this comment. Could you explain why you think this, if it doesn’t get personal. I don’t want anyone feeling like they are being singled out

For my part, I understand the convenience of the current field. I will say though that it feels crowded to watch. As it is, the robots take up almost 10% of the field surface, before any elements.

I loved the bridge game, it was very, very cool. The only part I hated was building the stupid bridge and moving it from place to place. We do about 10-12 event per year and make 4 teams bring their fields to each event. So we can get about 10-12 matches in per team before finals. It was hard getting the bridge off, transported, and then reinstalled. On the other hand, love those squares. Teams have used them for the last three seasons for bases and sides of hoppers to hold balls and rings.

I like the current small size because the robots do fill the field. They are forced to work with each other and that enhances the “teamwork” part of the challenge. Lots of teams this year with teamwork going “Ok, zoom forward, grab the green and place it. I’ll grab the red, you go for the blue, I’ll come along the drivers side, you go past the tall tower, we place and grab the other cube and bring it back along the same path”. When they do that it’s like a mini-ballet, very cool to watch, and when it happens there is a ton of room on the board.

Around the EP Summit when they announced the field size change. I asked why and was told that it was a request by all the top teams at Worlds to make that change. A slightly skewed sample size, since compared to the rest of the teams that have teams.

As far as other games go, we frankenmash games together with either parts from prior years (like the cubes from the first year) to little orange cones that I found in a dollar store, hacky-sack balls (they don’t roll well) to “rescue Barbie” – Barbie is on the ground, you and your partner robot need to run down the field, both of you pick up Barbie and bring her back to the safe zone. Most of the games are clawbot capable. I have a set that I use for demos, so games that are simple.

For another day but consider running a none RECF competition based league ie your own in school or with some schools together and see the fun and enjoyment go through the roof… none of that needs different field size hack build your own game if you want - anyone tries IQ soccer league yet or basketball? It is huge fun and no RSC5 crap or adults building bots and fronting kids… maybe we need to get back to what it was / is supposed to be fun learning for the kids and adult volunteer

Some parents and I are kicking around building robots to play an adult game, we were supposed to meet at our local place, but with the recent closures of restaurants, bars, etc. that may not happen. Sort of the “adult only built pinewood derby” contests that some Scout Packs run. (If you get a chance to see this, some amaaaaazing “dad / mom” built cars. Carbon fiber shell?? Really?!?!?

We often play on smaller fields like 3’x8’ that kind of fit on a folding table. One game was blue hacky sacks at one end, red at the other, you needed to swap them. Game was on a 8’ x 2’ field. It required some passing skills to make it work.

One year for VRC we did a + shaped field with the platform from Elevation in the middle (hey, I have a STACK of corner brackets) and that was pretty cool. (And now that I think of that, I need to find one of my High School CAD roboteers to 3D print me some “inside corners” to try that with the VIQ field)

So yep, lots of other games to play with and try. One of my problems is that we’ve been harvesting the prior year game elements to build with. So the Squares have been popular, last year gave us a ton of long 2x parts and the connectors with the huge holes that were perfect for running cables down arms. I’m looking at this years huge supply of 1x parts to build some more spidery style robots. Rather than 2x beams, lets build 1x truss like structures.