This is 6069x’s robot.
Currently running a 1:1 direct ratio of large high speed geared motors for a mecanum drive.
Four 269 motors geard 5:1 on a four bar lift.
2 chain driven motors on the intake for quick intaking.

We wanted to be a fast agile robot so we focus on quick intaking and scoring. We are able to easily pick up 6 sacks and score them. We also have a top goal scorer for match loads and can descore into our own intake. Wheelie bars on the back prevent flipping and it has a lower center of gravity. Currently we have ranked in the top 6 of every competition with a 5th place ranking at State and a forth place ranking at Nationals. Highest drivers skills official score was a 205 at state, the video is linked below.
http://www.youtube.com/watch?v=u58HfRagm6Q 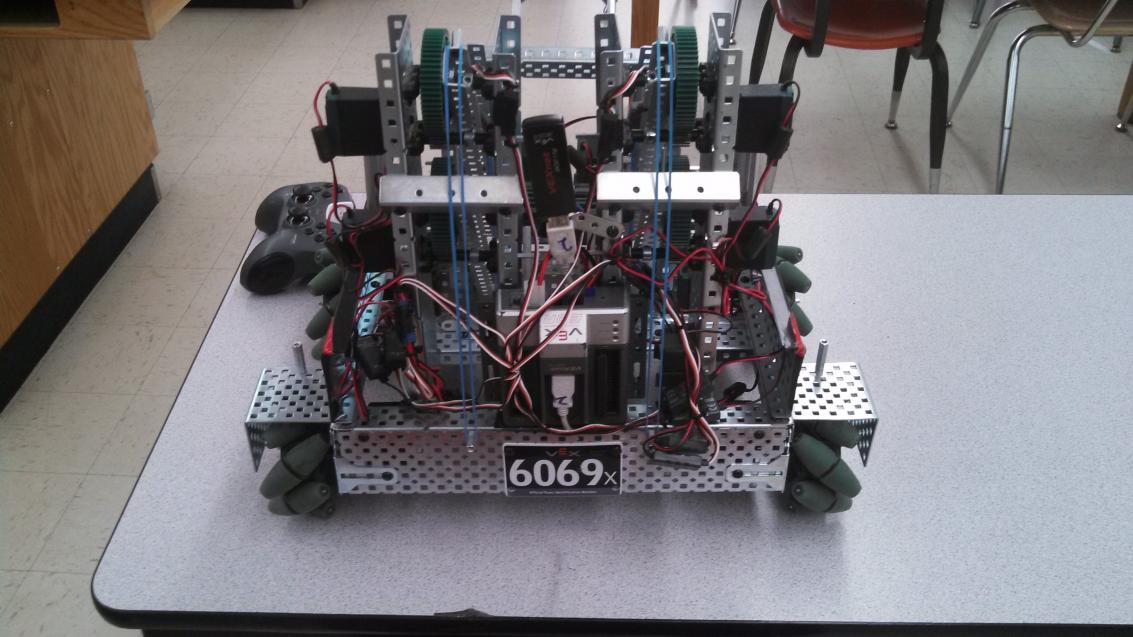 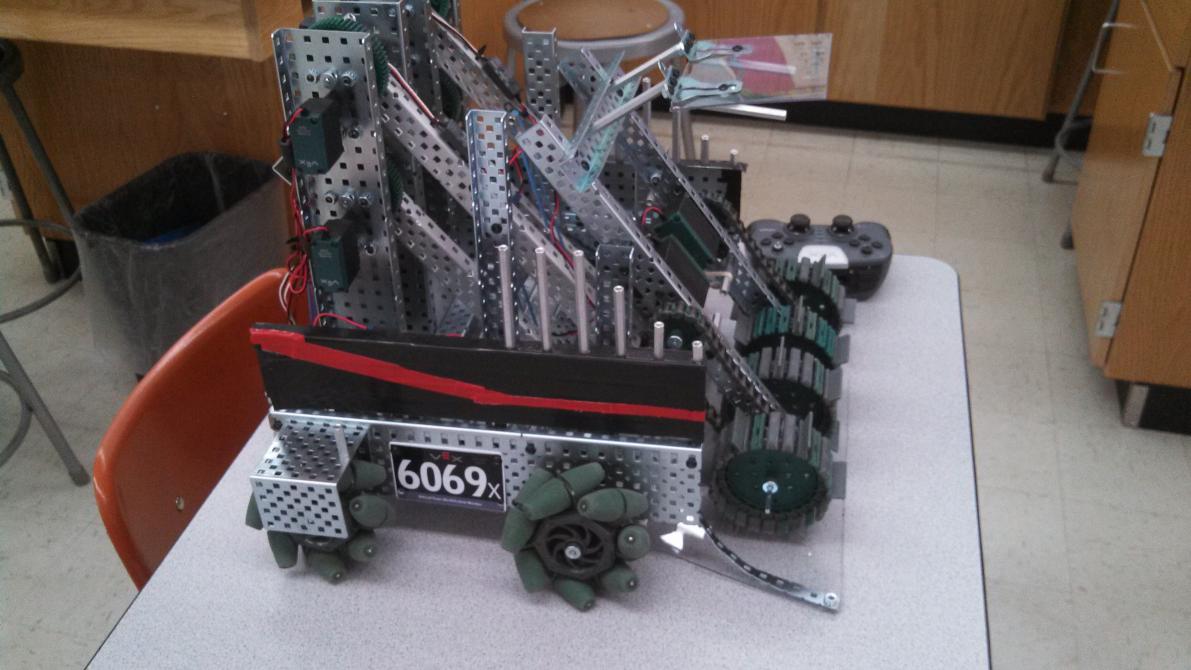 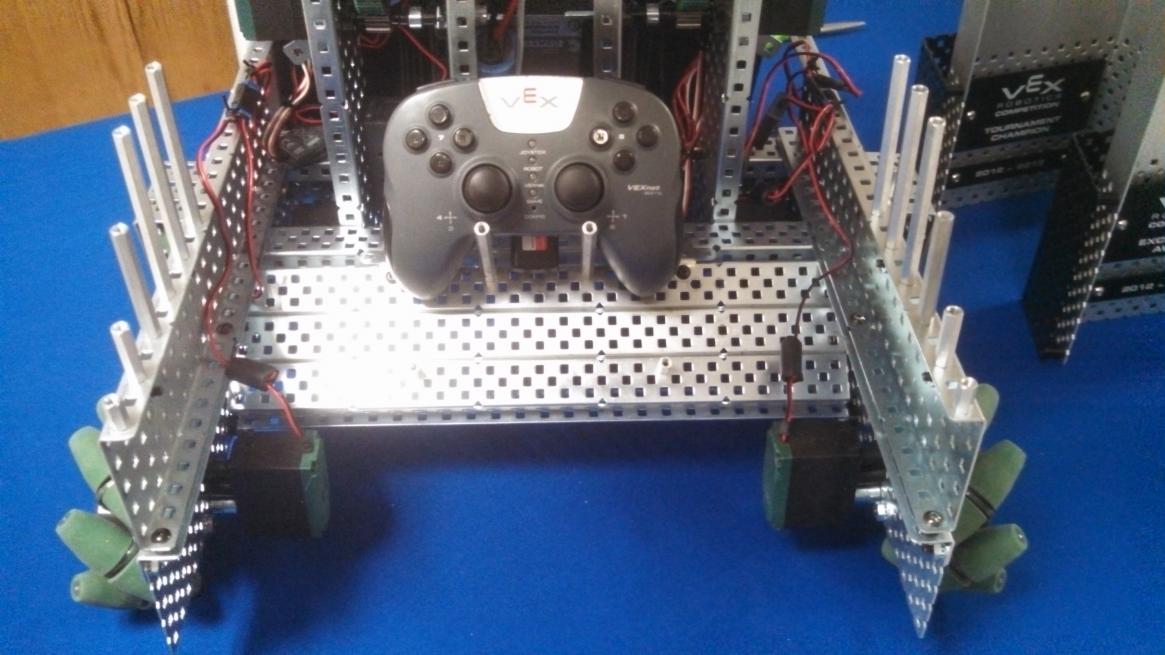 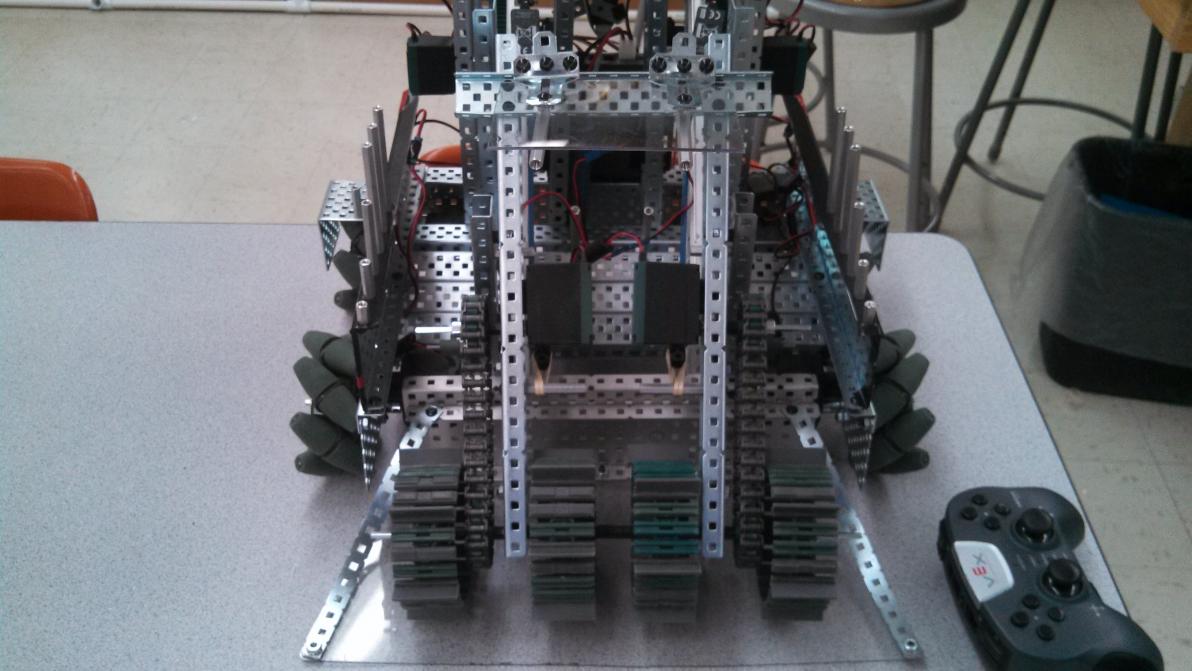 hi nice robot, just wondering do you not have problems with sacks getting stuck on that exposed mecanum wheels at the front, we did, so i covered it in aluminium

We did at first, but just changing the way the wheel face helped fix that, we are currently working on a gear drive so we can have tourqued motors and yet keep our speed.

Nice clean well thought out robot! Not a fan of 269 motors, but if they do the job then that’s all you need. Well done!

Wow, really clean robot guys! It isn’t overly complicated, and it does the job pretty well from what I’ve seen. My only problem with it is that the front wheels are cantilevered, but if it gets the job done, I can’t complain lol.

We are going to replace the lift with 393’s high torqued motors, and the drive will be different, but we aren’t going to change much because we are very consistent with this robot and it never ceases to fail!

Sounds like you have a solid robot that needs little or no change. After competing that well you know better than anyone where to improve. We look forward to seeing it in April.

We will reveal ours in a week or two, it’s nothing complex, just more designed around a strategy.

Will look forward to seeing it!!

it never ceases to fail!

Just kidding, but yeah, can’t wait to see you guys at worlds! Our new robot is going to get a reveal soon as well!