Back in Tower Takeover, I built a deployable wall prototype. I figured that this design could be usefull on a Spin Up robot as well. The design is fairly compact and the force of hitting the ground is enough to cause it to expand. Obviously this is not a full robot, but it could be a useful addition to one.

Feel free to ask any questions you have. 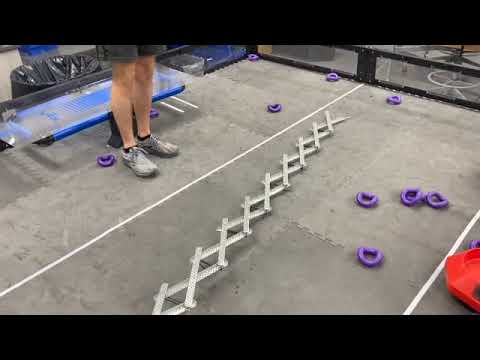 Just the other day I was looking a deployable wall from tower takeover (224X Vex Tower Takeover Bakersfield States Reveal (Tether wallbot) - YouTube). I would image that these scissor walls could
be passively powered by rubber bands, and just released by a pneumatic cylinder. With string you can still move and score points in the last ten seconds, which I think is especially important for making sure the rollers are your color, while walling of the other set of rollers. I foresee this becoming a widely used endgame mechanism.

How many tiles is it actually touching? I can see that it’s pretty bowed out, is that a function that allows it to deploy, or just a byproduct of how it was made?

How many tiles is it actually touching?

Highest it got in practice was 8, but there is no reason you couldn’t build a longer wall.

I can see that it’s pretty bowed out, is that a function that allows it to deploy, or just a byproduct of how it was made?

It’s just a byproduct. If you were worried about it not touching you could add little bits of string that hang down.

what are its dimensions? It doesn’t look that compact for an 18x 18 bot

Man these end games are going to be wild! I can’t wait XD

Imagine having several of these. The other robots will have a tough job of manoeuvring around the field. Field positioning will be a big factor for the end game with no entanglement or trapping.

I guess you could also use something similar to completely clear a low goal too… this season will be awesome with lots of variation in contrast to a game like Change Up.

So how did you make it extend like that?

Looking at the video, it would appear to expand with rubberbands pulling the joints together.

Its kinda funny how IQ is using scissor lift as well for extending into contact zone. Our team has been trying to make other things like an expandable long beam that will fling out when deployed.

Im pretty new to vex and haven’t been in any game that allows walls before, so I’m a bit lost on how to build one. Can you please explain the basic principles behind it?

This wall will probably not be the best for this, a string launcher would work better. but if you want to build this, search for a scissor lift and put rubberbands and a release mechanism on it.