I have never done a reveal before, and I don’t have authorization to do a reveal on our robot this year, so I’m going to practice with our Round Up robot (which is a lot more interesting than our Gateway robot anyway). I hope that isn’t weird or bad.

The basic design was a forklift robot that could pick up and score the tubes and also descore and store opponent tubes in its interior space. It could pick up 4 tubes at a time. The forklift was moved up and down by chains, and could hinge 180 degrees for a variety of uses, from starting within 18 inches, to holding stacks of loops better, and dumping enemy ones into the interior of our robot. 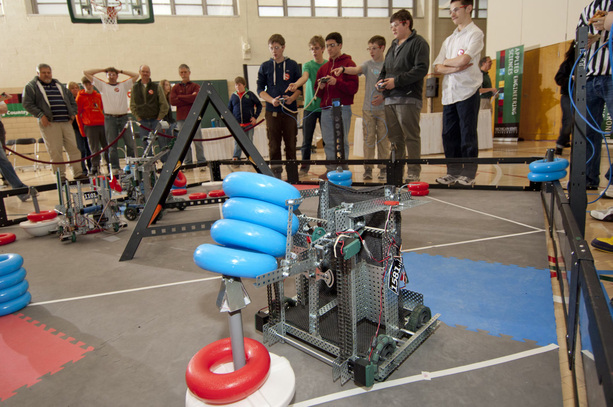 Our autonomous program used the cheap-score maneuver on the wall goal near the starting tile. It used limit switches to tell the robot which side of the robot the loop was on, so that the program could know which way to turn to drive backward into the nearest opponent. If no switch was pressed, meaning the robot was on the tile that didn’t have the wall goal next to it, then the robot drove backward for 5 seconds and could be aimed in any direction to hit a robot, goal, or stack of opponent loops. 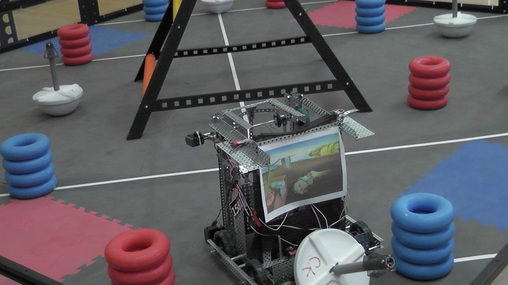 For the Middle School World Championships, we added a folding storage basin to hold opponent loops that our hinging forklift deposited into the robot. When expanded, it looked like a camper trailer, earning us the nickname “Team Winnebago.” We had a conveyor in the middle of the robot that was controllable, so that we could dump half a stack on the conveyor, score the half we didn’t dump, and then regurgitate the dumped half back onto the forklift to be scored elsewhere. Any opponent loops dumped were thrown into the camper basin, which could hold 13 loops. In addition to the 4-loop capacity of our lift, the max capacity of our robot was 17 loops, leaving the opponent with 3 loops to score (if they used preloads). 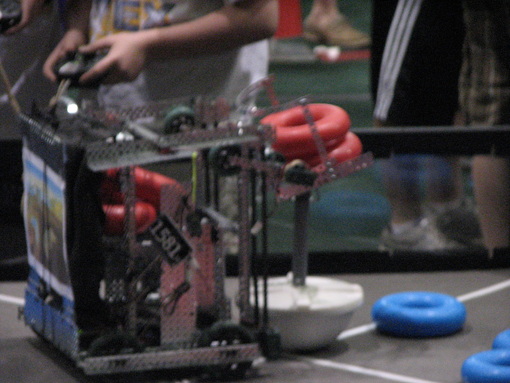 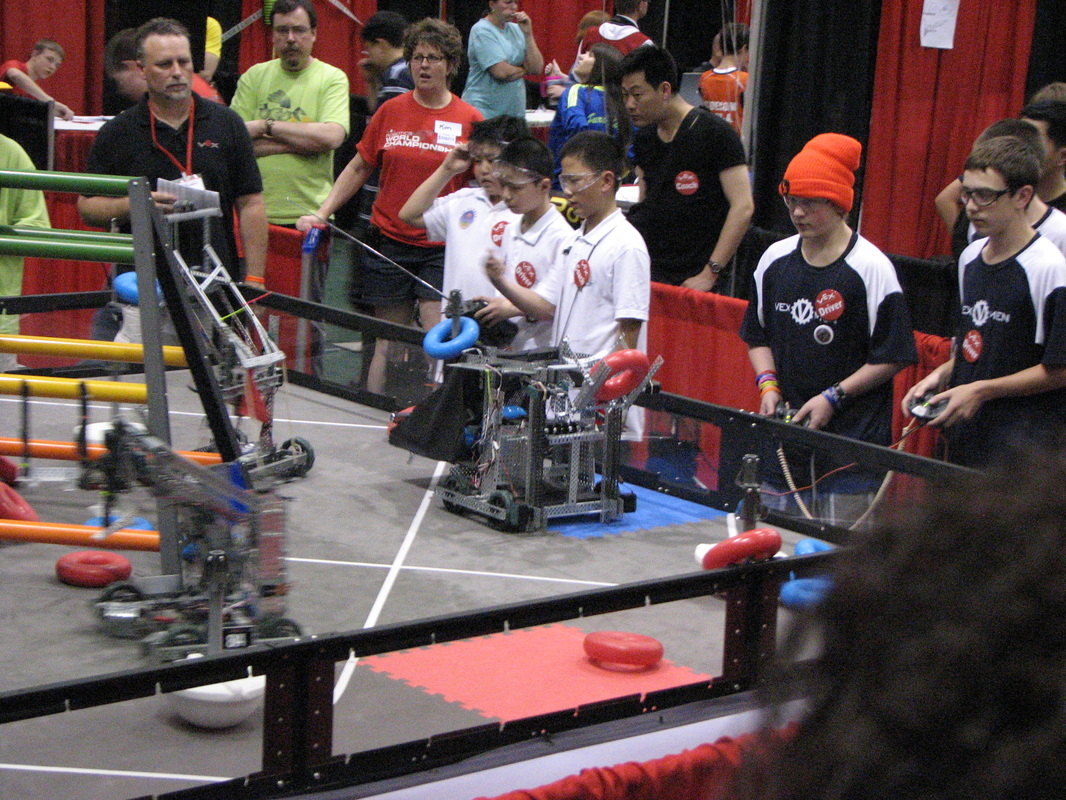 Unfortunately, our wheel base had a lot of overheating problems at Worlds, costing us 5 matches. However, once the problems were fixed by adding clutches, we dominated every match and rose from 112th place to 69th place. If we’d had clutches from the start we probably would’ve made the Eliminations.

Despite this, our robot became popular with the public in our hometown until its demise in June 2011, when we dismantled it to build our Gateway robot.

Very nice robot. I liked how you were a hoarder and a scorer at the same time

Looks good. I especially like the style of lift you guys used. very interesting.

Thanks! The chain forklift was not speedy but if was very robust and inspired a different team, the ThunderChickens, to use a chain lift for Gateway.

(i thought i clicked something else by accident :P)

Yeah that and our Round Up robot is a lot more interesting than our Gateway one, and I’m not sure if the rest of my team would want me to do a reveal until after we’re done competing regionally. I don’t see what the problem is, though; if anyone tried to copy our robot now, they wouldn’t have it working very well until May (that thing is complicated!).