We’ve been working on this prototype for our lift. It’s a four bar that is offset in the front to provide a slight tilt at its highest peak. We still are working on providing a way to prevent tipping. Theoretically, the weight we can lift is unlimited based on how many rubber bands we are using.
Videos:

Any suggestions or questions are open for discussion ;)](http://youtu.be/goJftwR-Y68)

That is a very cool lift design and it seems to work with almost any robot. How much weight can it lift right now without tipping over and how heavy is your robot right now?

The robot is all aluminum with two tanks and two batteries so I would assume around 12 pounds. In the video, the robot lifted was VERY light (less than 10) but when we tried lifting another heavier robot (around the same weight as ours) we tip. If the base is held down, we can lift the heavier robot. Something that I forgot to mention is that it is also aided by a pneumatic assist at the base of the four bar

Have you considered adding a system that pops out forward from underneath your robot to counteract the forward tipping? Maybe using elastics and reinforced linear slides that release when you lift the other team’s robot?

We briefly went over the possibilities of anti tip mechanisms. Looking back at our robot, the linear slides deploying after the arm is lifted just might work

Glad to be of help, granted that it was pretty much already considered.

Nice lift. How wide is your base? If it’s near 18 already those locking wings look like they may extend out of 18".

See you at DV.

EDIT: Oh, it didn’t click that those could extend out of 18 at the end of the match lol. Nevermind

When not engaged, the width of the robot is 17.5 inches. Cya at DV too

Im guessing this requires the robot to be reasonably heavy, otherwise i’m guessing your robot might fall over with the extra weight added by the alliance robot and lift.

Theoretically, the weight we can lift is unlimited based on how many rubber bands we are using.

Can you explain how it can lift unlimited weight? I am quite confused

Has any of the bars given way? Or did your shafts bend? What are the mechanisms you used to enforce the structure to ensure that it can support heavy loads?

We tried to make the lift as simple as possible and to prevent shaft bending we used screws in place of shafts. I haven’t measured the maximum amount that the lift can hold but I will be working on it today and will get back to you guys

To put into context of the video, the robot was lifted with around fifty rubber bands. We have solenoids that assist for heavier load and are filled with the max amount of psi possible but they were not needed for the load in the video

I would be so scared to make my robot drive on that, yet so psyched to see that as a spectator.

I know it’s very irrational, especially because that’s the point of communication before the match, but I would be so afraid of a partner using that lift system and possibly catapulting my bot into the air.

I like how you offset the linkage so the robot would angle inwards, lowering the chance of falling.

EDIT: I guess im not the only one XD https://www.youtube.com/watch?v=WbY8VCVURKs

Impressive. I had an idea for something similar, but looks like someone beat us to perfecting it

Impressive. I had an idea for something similar, but looks like someone beat us to perfecting it

We will probably not use the lift at our next competition consistently and for the fact that it hasn’t been stress tested with actual robots. One addition we did add however were some anti tip bars that launch out when the arm is lifted 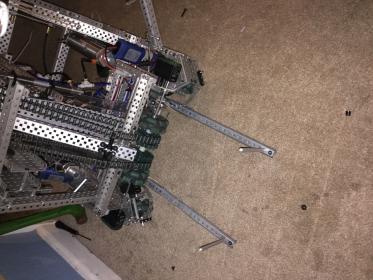 With the anti tip bars what sort of weight can you lift?

that is a lot of pistons, I counted 5 just for the lift, that’s a lot.

that is a lot of pistons, I counted 5 just for the lift, that’s a lot.

Not really, they’re all only used once, so it uses the same amount of air as one piston firing 5 times.