Hey Vex Community. This is my first robot reveal I have done, so pardon me if I have any mistakes. 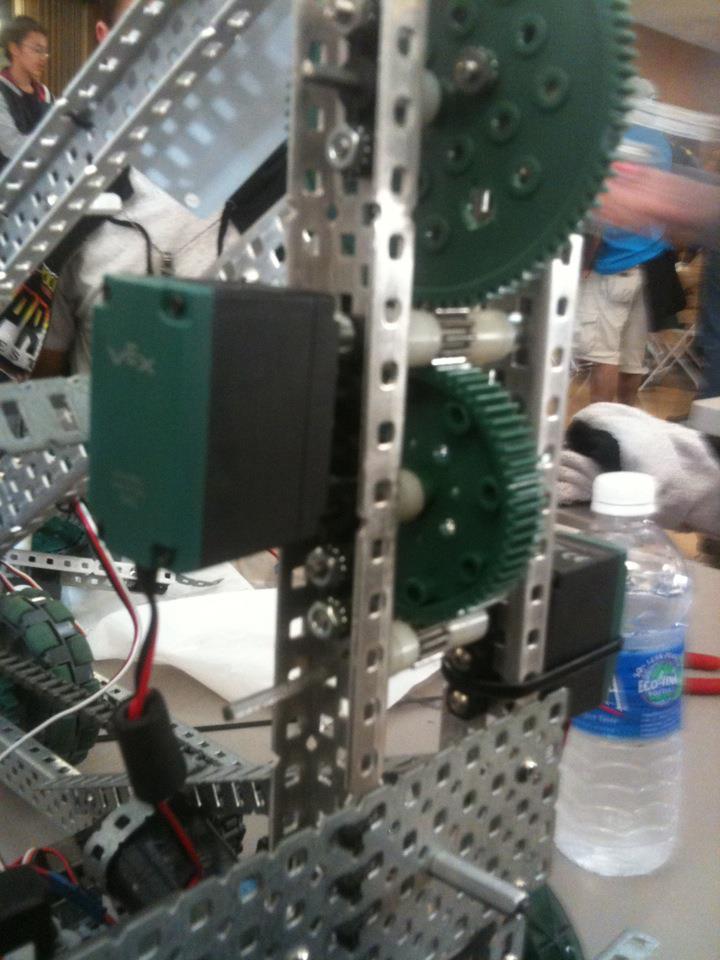 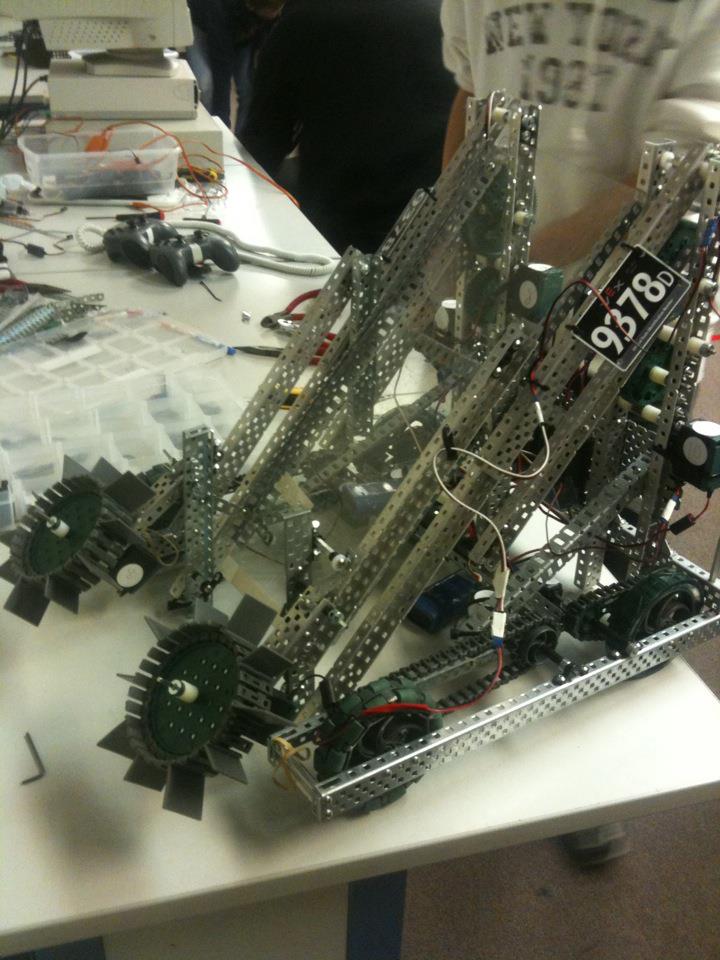 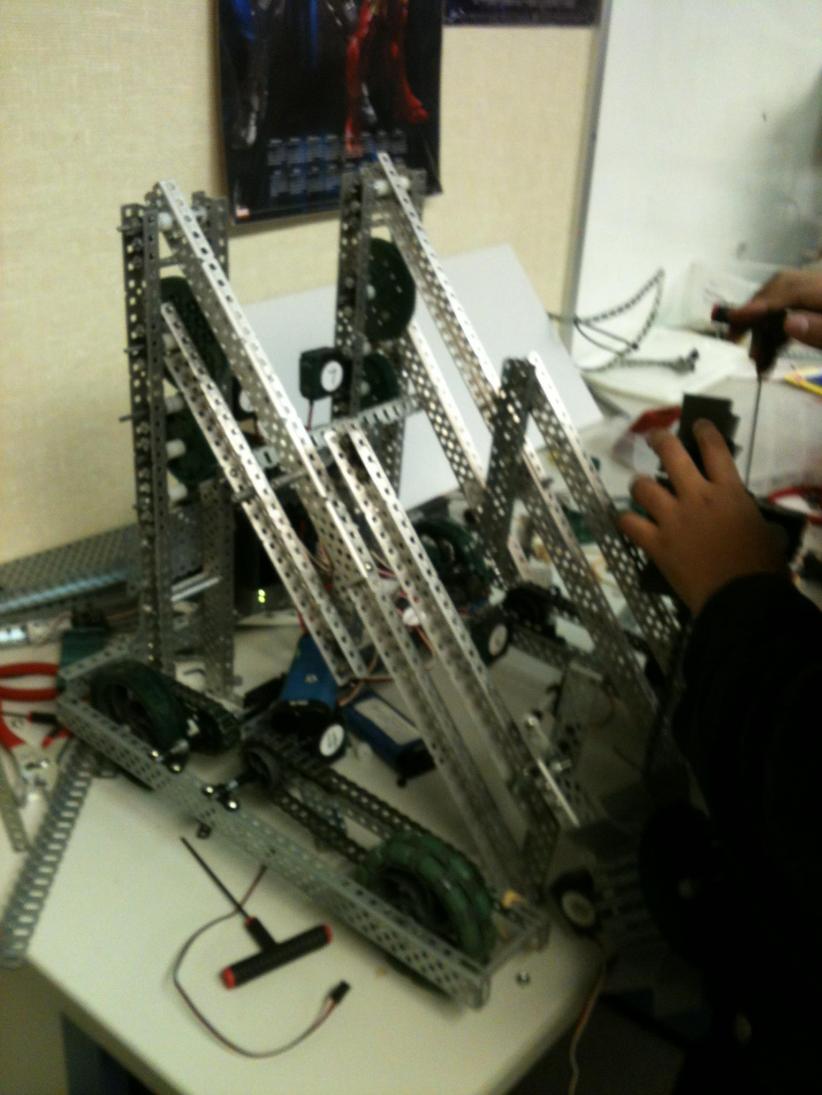 Looks like a solid robot, just have a couple of questions.

Hello!
It looks like you have a very good, sturdy, and lightweight robot that you’ve worked really hard on.
A few suggestions to make though: You don’t need 4 393s to drive an arm at 1:7 – I would personally put two of those on the drive and gear it more aggressively for speed (but that’s just me).

Also, the angle for your intake ramp looks a bit steep and might make it hard to pick up that last fourth or fifth object.

Other than that, looks great! Keep up the good work.

@Owen- Hey man. Thanks for the response and the compliment.

2)Yes. We actually do on the six bar. I may have not put my latest photo of the robot. This may have been a picture while we were finishing. We put the elastic/ rubber bands before packing up. Sorry bout that, Ill find a picture and post it. As for the base. I was thinking of doing that, but I will have to see if I have enough time till the next tournament.

Thanks for the questions!

@RampantFang- Thanks for the compliments.

Thanks for the suggestion. We are planning on switching them, but we have to make sure we have enough time before the next tournament.

The speed of the base is another issue we would like to resolve, most likely, distributing the HS motors throughout the robot will allow for more " aggressiveness" to the robot.

And lastly, I do agree. I plan on lowering the ramp so it does allow for more of an easier entrance.

Thanks for the compliments of the robot and thanks for suggestions!

@Murdomeek- At the last tournament, they didn’t have driver skills/ programming. At school, we average around 23. Its now high, but we are more used to the controls now, so we shoudl score higher.

It looks like the front and back wheels are not chained together.
Do you see any advantage keep them separate?

2 269s on the wheel base? Not a great idea. Our robot has 4 393s on its wheel base. At a practice session, we once ended up pushing a defensive robot with 2 269s driving its wheels (like yours) and one of the metal gears inside its left wheel motor stripped. It happened to them again at a tournament when they were rammed by a different team that was using 4 269s. In a situation like this, the clutches on your 3-wire motors would probably strip, leaving your 269s vulnerable.

Overall, however, your design looks quite sound and I hope you do well.

We were impressed at how fast your lift and delivery were.

What am I missing?

At the last competition, we placed 19 out of 30(?). This was because our alliances kept disconnecting, and it was always a lop sided match. We were selected by the 3rd seed, and managed to get to the Semis. I am happy with my robots success.

We had expected your robot to rank a lot higher than it did. Although our team ranked 5th, I would estimate that our robot probably had the 10th - 12th highest scoring potential (of 33 robots), and yours was more capable than ours. We were the 4th seed captain and planned to pick you, but # 3 got to you first.

Lol where did the picture on the back of your intake go? And yeah I suggest you switch the motors on your robot to prevent it from overheating or browning out again. It was a nice run with you guys but unfortunately we browned out as well on our last match and was unable to get the doubler… We never did figure out why it browned out although I think it was due to the connection between the motor and motor controller got disrupted. We’ll see you guys at your Vex Skills Tournament with a new shiny robot.

@jgraber- We would have loved to chained the sides, although one of our teams is doing a linear chain lift so there wasn’t enough chain to go around.

@The VEX Raptors- Thanks for the suggestions. We plan on switching them out in the near future, possibly this week.

And also, thanks for the compliments!

@ManicMechanic- Thanks a lot. We planned on gearing it a bit faster, but due to time constraints we weren’t able to change it. Although we were still “fast” with the 7:1 gear ratio. Lol. We planned on ranking higher as well, but the silly errors in my programming were killing us, and also our batteries. Its okay though, we tried our best and got to the Semis. And thanks, we would have accepted but because we were chosen by another team, we couldnt. You should have asked me! Lol

Thanks for the compliments!

@FirePhoenix- We took it off… Lol. Yeah. Its all good, and compared to the 1st seed alliance I do not think we would have won.

haha. Can’t wait to see your robot at our Skills Challenge. By the way, SIGN UP!!!

Thanks for the compliments!

@jgraber- We would have loved to chained the sides, although one of our teams is doing a linear chain lift so there wasn’t enough chain to go around.

If I remember your picture correctly,
I think you have room to put 36t gears on the same axle with the driving sprocket, and put a 36t idler gear between them to tie them all together.
If you end up with an extra motor available for your drive, you can put it on this idler axle (and program it inverse, or swap red/black MC wires)