To start off the new season, myself and a few other SCA members have undertaken the challenge of a CAD in 3 days. This particular topic is dedicated to mine. I’ve actually finished early, so you could call this a Cad in 2 days.

Firstly, let’s discuss my thought process for coming up with a viable design. As I’m sure many of you thought, This game appeared to be perfectly suited for gateway robots, without changed anything about them really. A tray on a 4 bar is I’m sure, going to be the main design early season. It’s simplicity and effectiveness is very good, especially when people had all of TT to get good at side rollers and trays. But then I did a little more thinking, and upon realizing how short these goals are, it seemed a waste to me to bother lifting. If you have to get objects to 18" goals, and you can make an 18" tall robot, you don’t need to lift, just bring the balls to the top of the robot. So then I thought of having a ramp lined with rollers, which would intake balls at the bottom, and pull them up the ramp out the back. the issue with that would be you would have to turn around every time you wanted to switch between scoring and descoring. So then I realized I want to have a front-intaking tube system to take cubes from the floor or goals and bring them up and around to the front. So basically I just removed the wheel from a flywheel, replaced it with an indexer. Balls go in the front, up an intake system, and out the top and front. Simple. But it was difficult to direct the balls forward as well as up to get them to actually land into the goals without really shooting the ball, which I did not want to do. So I then thought of having a flipout hood so I could actually make my robot taller than the goals. This was very simple and easy, and I think is a very good alternative to lifting. I came up with most of these solutions on the go as I was CADding, with some assistance/advice from @ZackJo, @mvas, @meepmeepme, and @TaranMayer.

So, here are some renders showing the robot and how it scores.

This picture demonstrates the 4 ball capacity. It was originally intended to have only 3 ball capacity, but the flipout hood game me some extra space. 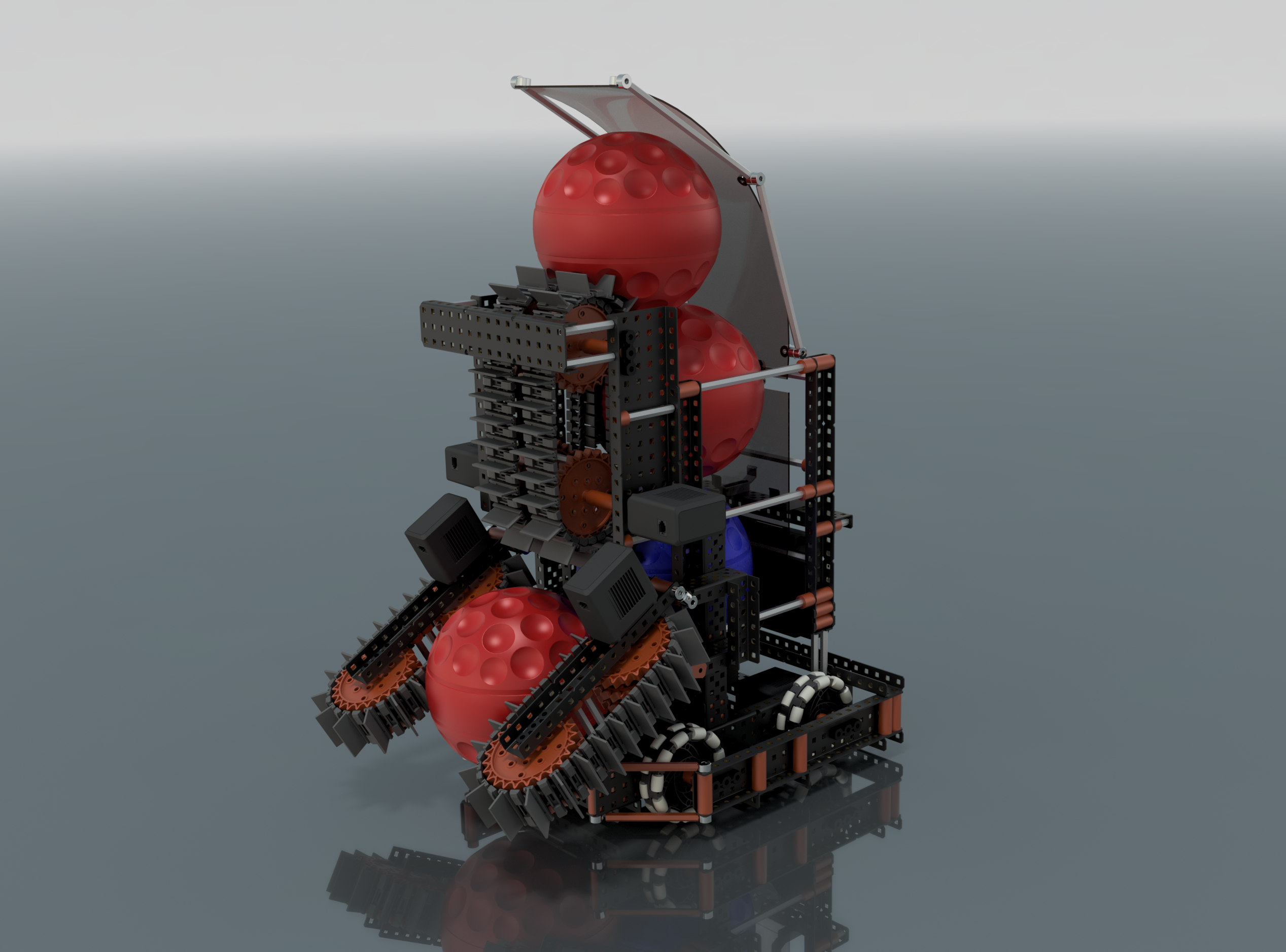 Here is an isometric render of it without any balls in. You can easily see the hood system, which I would line with a combination of antislip and adhesive foam if I were to build it. (which I probably will) 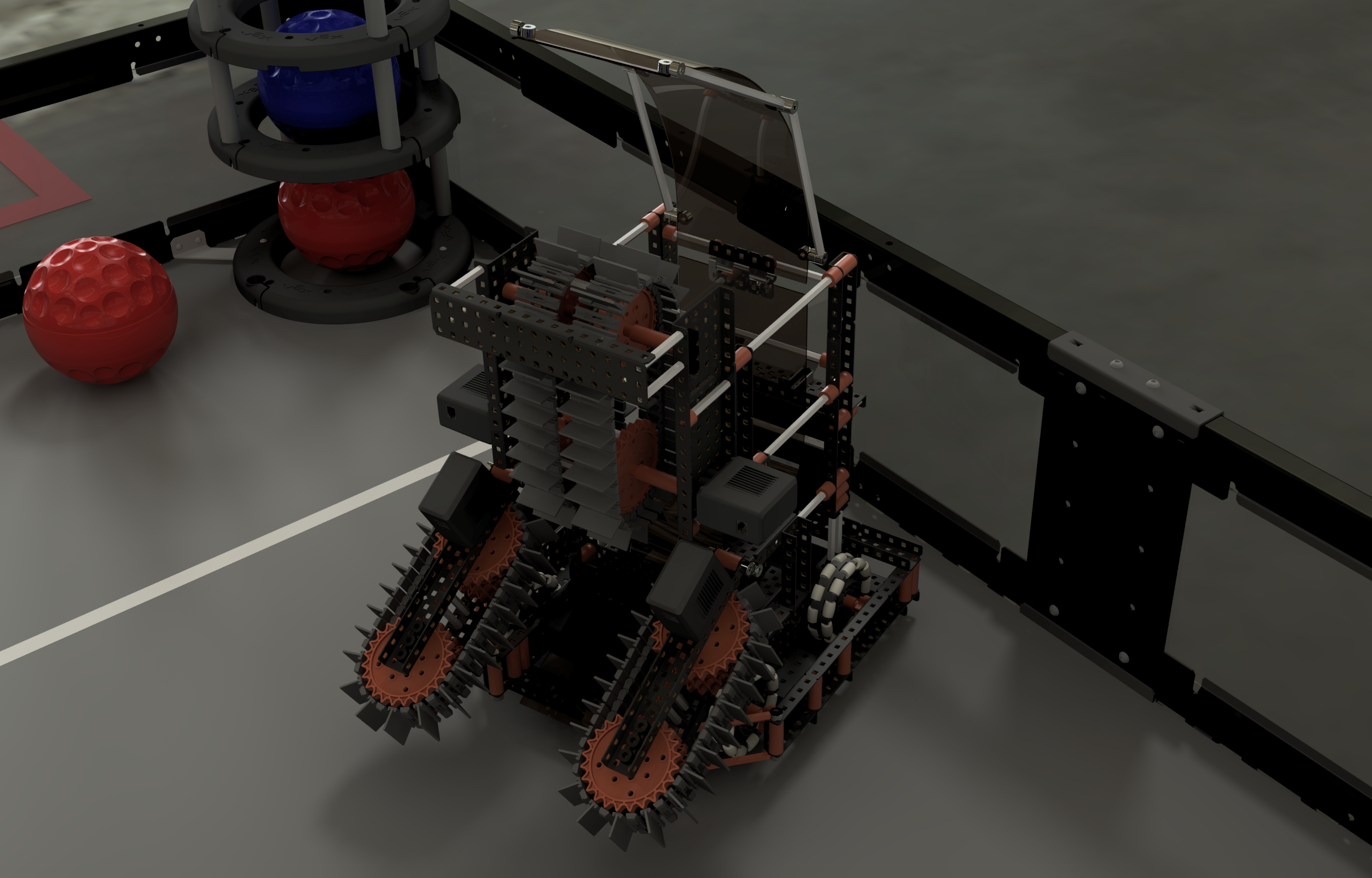 Here you see it about to score. The Intakes and Indexer would both be 600 rpm,
which will sort of gently toss the balls into the goals. Not shoot them, but toss them. Just a small amount of momentum to make sure the balls clear the rim of the goal. You can also see how the side rollers at the bottom are for the purpose of descoring balls from the goals, which means I can be descoring and scoring simultaneously. This is key if I have a hood full of my balls and I want to replace a goal full of my opponents, I can do so without moving at all, in one fluid, efficient motion. Then I can spit out your opponents all over the place to make it difficult for them to retrieve, or I could hold on to them to stop them from getting them, if that meets my strategy. 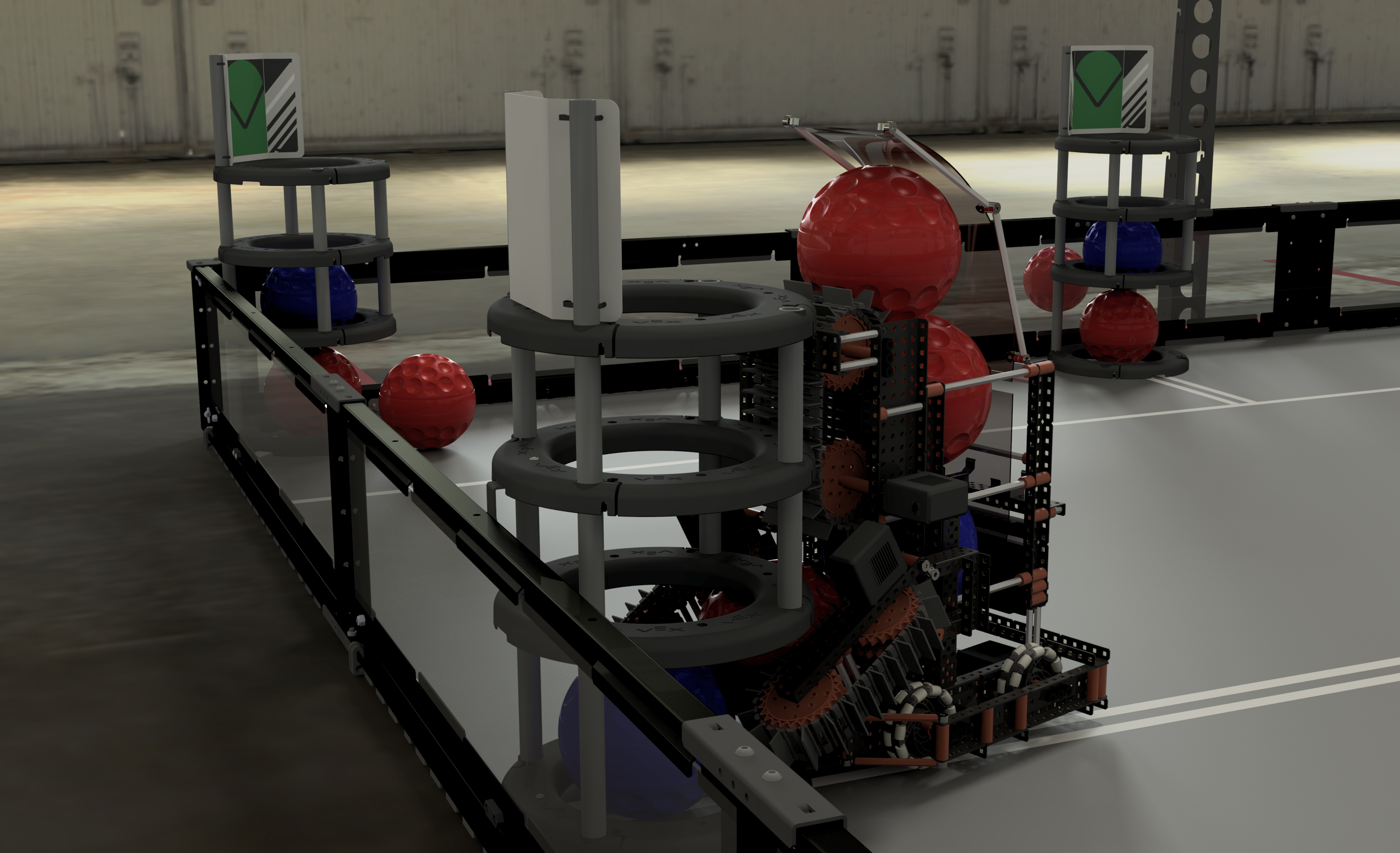 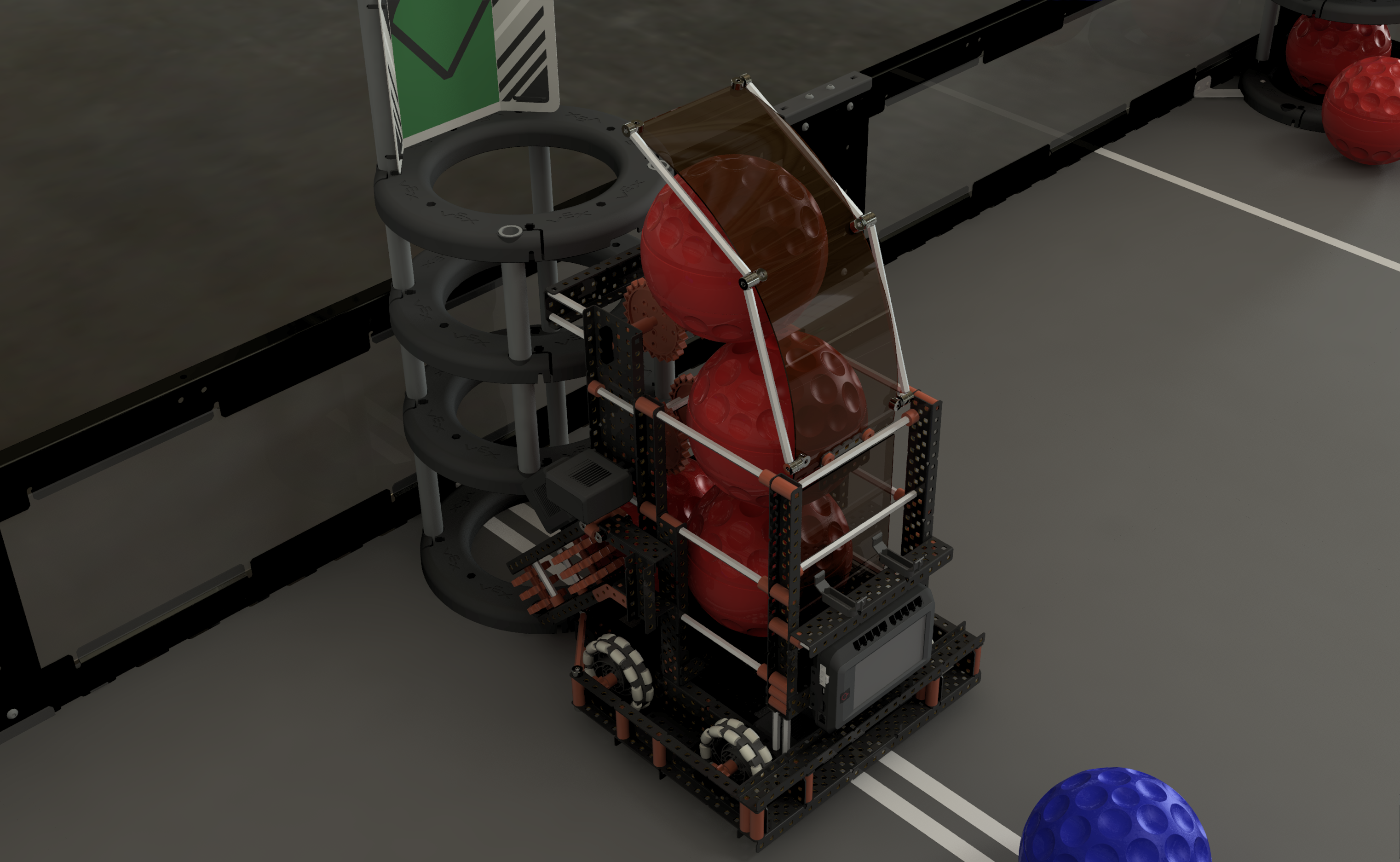 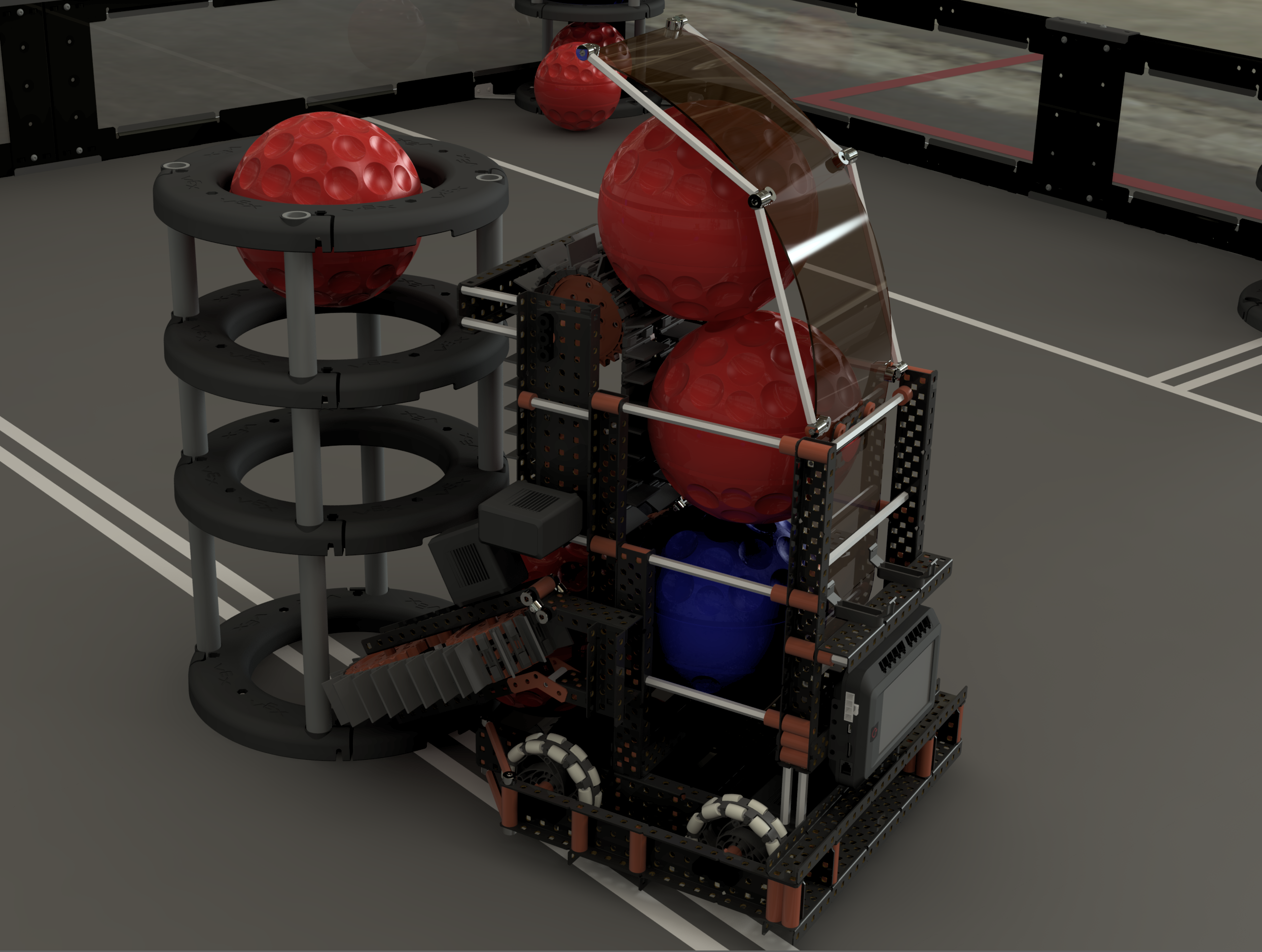 This robot can perform all the tasks a competitive robot should this year:

So in conclusion I do not see this robot becoming the sole meta, despite other people having thought of it already, because the tray lift still seems viable, especially if it has descoring intakes on the base. I predict this kind of robot will be about even with tray lifts in terms of efficiency, and I’ll be interesting in seeing how the two designs evolve and progress this season.

I made and rendered this robot using Autodesk Inventor. If you have any questions, please ask, I will answer them. And I wish you good luck this season.

94 Likes
Inefficiencies of No Lift "Traybot"
Petition to call this design the dunkbot
4bar Tray VS Dunkbot (snail bot?)
Your Strategy Ideas - Change Up
TheSeasEnd April 27, 2020, 4:39am #2

I… Was literally Cad Modeling that

This is really cool! Do you think that having such a short base might lead to some tipping issues? Especially if you speed up that drive.

This is a very good and fast design. However, how do you think it will work with the middle tower? It might be a bit difficult to score that with the current design. Amazing job!!

This was the same sorta thing I was imagining, but much better thought out and with beautiful cad models. Nice job!

Yea, everyone was modeling this. We at SCA decided to let Xenon CAD the main one, as his looked the best. I might be animating this as well.

The design is also more effective on reordering the balls since it store balls in a queue rather than a stack. I ran through all the ball possibilities and it can reorder the ball to bring your alliance’s color on top without needing to outtake anything

Would you explain how the pop up hood works? Like ik it’s on a hinge but is it meant to be rubber banded because it would go back down if empty right? or am I misunderstanding it?

This seems like a great design! I have a question though:
How would it sort through the balls? I cant see a way. Does it just spit them out?

Also, I see how it can compete with a gateway-esque traybot, but with the capacity, will it be more efficient? One of my ideas, which has some flaws that I could work out, was this:

It has the ability to take/store balls in your tray that you dont want, and either keep or dispose of them. I dont know if it will be more viable than this, but it is an idea.

The fundamental things in this game (imo) are being able to score and descore quickly, and to hoard your opponent’s balls. Taking 3 is a huge disadvantage to them, and I dont see how this design can do it effectively.

Either way, great design, and I hope to see what improvements people can make on it! Thanks for sharing!

how exactly is the hood going to stay up isn’t it going to fall back because the ball is being compressed into it? also how do you plan on making sure the standoffs do not go flat, when a piece of lexan is bent like that all it want’s to do is be flat again

What’s stopping the balls from just rolling to the side instead of going over the lip into the goal? is the vertical track spinning so fast the balls have enough momentum to go over rather than roll?

What’s stopping the balls from just rolling to the side instead of going over the lip into the goal? is the vertical track spinning so fast the balls have enough momentum to go over rather than roll?

It would be tuned to that point. That’s just gonna be a balancing act between spit out speed, and good compression to get enough power to go into the hole without it wanting to bounce out.

how exactly is the hood going to stay up isn’t it going to fall back because the ball is being compressed into it?

So, while @Xenon27 was cadding, we were thinking of ways to get this to fit in size properly. I thought the hood would flip into size in the same way some hoods moved in turning point (but with a larger range of motion). The problem with this is there is no viable way to keep the hood in place in a simple manner (you could possibly do a one-way ratchet, but it’s too early season to complicate designs)

So @Xenon27 came up with this more simple, elegant solution. The way this hood works is it’s tensioned to be upright by default, but friction and the weight of the hood hold it down in size. The moment a ball is intaked up to the exit, the hood springs upwards (it’s hard to cad rubber bands). Because the balls are constantly going to be moving up through the hood, and because there is a hard stop preventing the hood from moving backwards further than the ideal angle, a rubber band can be enough to hold the hood in place when there are no balls being fed out.

Aww, I just saw this now. Oof
Anyways, your robot is incredibly well-built. Astonishingly detailed too!

I made and rendered this robot using Autodesk Inventor.

Very, very nice. I love the use of the collar & standoff trick to build really ridged structures. Very compact design, not really a cubic centimeter of wasted space. Only upgrade I’d try for is a vision sensor to swing up and over from the back to be positioned at the top of the hood to focus in on the goal placement. Nice job, deep envy on this side of the keyboard.

Only upgrade I’d try for is a vision sensor to swing up and over from the back to be positioned at the top of the hood to focus in on the goal placement.

One possible solution for consistent goal depositing is hard stops somewhere on the robot that passively align the robot to the rungs on the goals. This way there is no error in sensor readings and it’s viable in both driver control and autonomous.

What CAD program did you use? i have been expirementing with Autodesk Inventor and i haven’t really got anywhere.