Activate and deactivate with a single button

Hello, I want to activate and deactivate a function with a single button but I’m new to programming and I’m just learning it on my own but this is getting complicated

You could do something like: make a variable that changes by 1 when you click the button, and when the variable is greater than 1, set the variable to 0. Now, put an if statement where if the variable is 1, do the action; if it is 0, don’t do anything.

Note: I am not a professional coder, I am just trying to give a simple solution, although there might be better solutions. 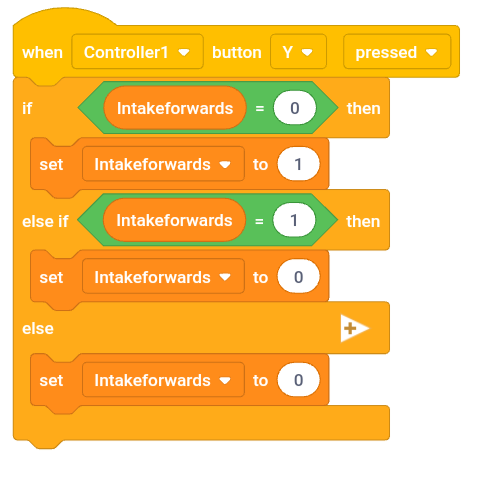 If you use variables, which is a good solution to this problem, remember that good programming practice says to declare them first and set them equal to zero (or some appropriate value). Sometimes code will freak out when it hits a variable with no value (not the same as zero/0).

Instead of using numbers, it may be better to use a boolean (true/false) and simplify the code by setting the boolean to not the the boolean value. Example: boolean = !boolean;

In this case, booleans would be a good replacement, but not always. For example, for our speed adjustment code, It needs to use variables because there are different values other than 1 and 0 that it’ll use, to allow for a more controllable speed system. (It’s going to multiply the joystick inputs by integers which are less than one, the variable will be the integers.

This is a good idea, but remember who the OP is… someone that’s just starting out.

I’ll plug my post. The example uses a bumper switch but that could easily be a button.

I like doing the latch demos for new teams. Inside the Forever loop the code is being evaluated numerous times each second. If you hold down the bumper switch it will change the motor state back and forth in each loop (on / off / on / off every second). If you add a latch it only allows the MotorRun variable to switch one time and it will not switch again until you let go of the bumper (un-latch) and press it again. [image]

Isn’t there a code block that differentiates between a button that’s just been pressed (single event) and a button’s that’s held down (continuing event)???

You can create events with the Broadcast element. I believe that it is a “once per press” but I have not personally tested it. 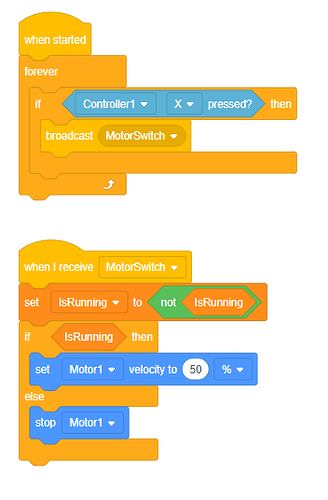 Which codes the following: