Student – Anyone born after April 23rd, 2002. Students are the only individuals who design, build, repair, and program the Robot, with minimal adult assistance

means I have to tell students that will be in the 8th grade that they cannot compete. I have three students who are too old by anywhere from a few days to a few months. I was under the understanding that the middle school division was intended for grades 6-8… but many of my 8th graders were born before this date.

I don’t have that problem because my only 8th grader was born before that age, but then again he is supposed to be on 7th grade and not eight. In Puerto Rico a normal 8th grader should be between 09/2001 to 08/2002 since the cutoff date is September.

We are a stand alone 7-9 Middle School and this rule now cuts out 1/2 of my students from being able to compete… VEX PLEASE LOOK AT THIS RULE AND ADJUST… I didn’t see a problem at worlds with older kids dominating the IQ MS division… We only saw one team with 9th grade Jr. High Students… I have an 7th grader who started school in Tennessee and due to their enrollment rules he will not be eligible to play and he is only in 8th grade… They need to bump this up to account for students who have been held back and or Middle Grade Schools that have 7-9 representing them

For 2014 -2015 season, a student was defined as “any student who is 14 years of age on April 23rd, 2015 is only eligible if enrolled in the 8th grade or lower.” Now the requirements state the student is eligible if they are born after April 23, 2002. This new date changes the eligiblity to 13 years of age or younger on April 23rd, 2016. What precipitated the change to 13 years of age? Most USA 8th grade kids will not be eligible with the new requirement. It will, in effect, eliminate many YOUNG middle school age kids from participating. Please reconsider for the children.

:mad: I do not want to turn students down… My school went all in on IQ based on the fact that the rules for play aligned with TSA VEX rules… Now 1/2 of my current team is not eligible to play!!! needless to say I have some parents that are not real happy with this rule… I have parents that went and invested in a VEX IQ kit for their child and now all of a sudden their 8th grader is no longer able to use the system when they had planned to use it for 3 years. To have a really competitive robot in VRC division you are looking at $1000’s of dollars not including the field. If you really want the IQ platform to grow this rule needs to change. The rule as is currently sits now eliminates too many students. The rule should be simple… Middle Grade students are students that are currently enrolled in middle grades 6-8 or 7-9 only if school is a stand alone school

Is this not somewhat like Baseball or most sports or several legal applications to various things? The entry to a division is based on age by date cutoff. Even entry into school in the US is by age cutoff. I know many folks that miss that requirement by a month and the whole grade level is offset. It has been like that for as far as I can remember. Last few times there were questions on age vs level as defined by school. That probably prompted specifying a date.

Although it is easy to make an argument for having a specific birth date as the cut off, it doesn’t make sense that the new cut off is essentially a year younger than it was last year.

A normal 8th grader in Puerto Rico starts the 8th grade with 13 years and ends with 14 years… only a handful begin the school year at 12 and finish with 13 (the ones that skipped a grade).

Agree. I did not pay attention there for a minute.

All rules are subject to change in the Game Manual, which is not considered official until June 15, 2015. Your input is valuable and appreciated and will be considered in developing the official Manual. Please continue to share your feedback, as it is important to our efforts to provide the best possible learning experience for students.

I started a team in September for my grade 6-7-8 middle school in Wisconsin. If the new rule stands I will have to cut out all eighth graders. What good is a middle school team that does not allow 1/3 of the students to participate? I just looked up two of my seventh graders who will be 8th graders next year. Under the current rule I will have to tell them they cannot join the team next year. This is not what I want to tell parents or my administrator. Please allow students who are enrolled in grade 6-7-8 to participate in VEX IQ.

I’m hopping is a type-o

I made a chart

I hope the language is modified as one of the factors that draws me to VEX as a coach is the freedom to place students into IQ or VRC dependent upon my understanding of their individual strengths. There are other competitions opportunities in my area that have extremely strict guidelines on who can participate base on age and grade, and I find that the guidelines aren’t particularly in line with the needs of many students and schools that I work with. It’s frustrating. The upside is VEX is generally quite reasonable, so I’m not terribly concerned. 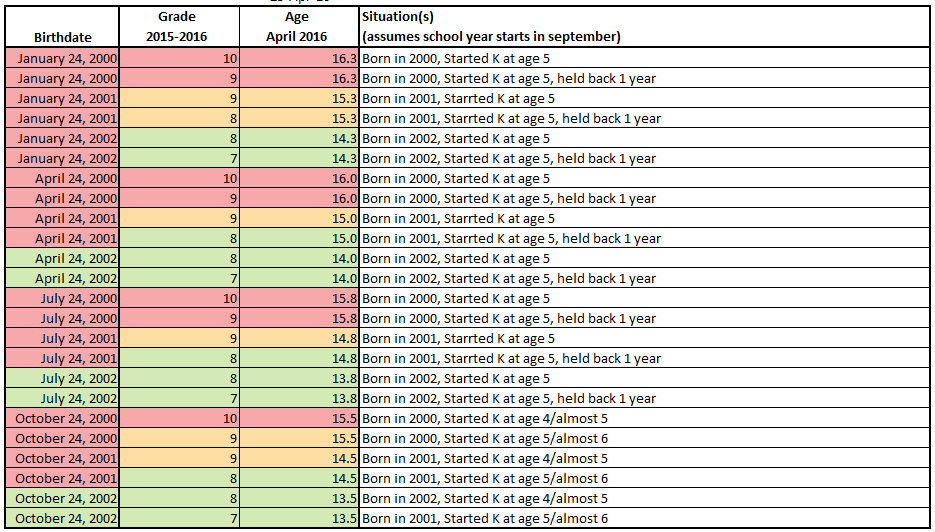 It would be difficult for 3rd grader to compete with 9th grader. At least until State both levels compete together. I know some folks that wanted to start with metal in 8th so they are familiar with it as they go into 9th. There are very few middle schools that are 7-9 that I know of (9 is high school). This situation becomes sticky going with only grade or only date.

It would be difficult for 3rd grader to compete with 9th grader. At least until State both levels compete together. I know some folks that wanted to start with metal in 8th so they are familiar with it as they go into 9th. There are very few middle schools that are 7-9 that I know of (9 is high school). This situation becomes sticky going with only grade or only date.

I agree the age gap gets a bit awkward, though I still lean towards more open cut off dates. The orange rows in the table two posts ago were the ages/grades I considered to be in question but worded inclusively anyway. Reasoning as follows…

I coached mostly very young teams this year (not on purpose, it just happened to work out that way) and it is a little interesting to see my tiny 2nd/3rd/4th graders on an alliance with 6 foot tall 8th graders, but nothing negative has come of it. If anything it’s worse on the older students that have a rough time even when competing with the young ones, and while unfortunate, there probably wasn’t any better way that would have worked out. Additionally, as IQ grows I’d expect there will be more elementary or middle school only events at qualifying level, closing up that age gap somewhat. Maybe it’s just around here, but VRC has seen middle school only events become more common as team numbers grow, so I’d guess the same would happen with IQ.

At risk of over-complicating the manual, perhaps the language could include a statement such as “9th grade students and students aged 15 or older should compete in VRC if it is an option. It is not in the spirit of the eligibility guidelines to use the cutoff to gain a competitive advantage over younger students.” Though subjectivity is a mess too.

What was wrong with last year’s definition? I thought it works just fine, allowing for the vast majority of middle school students to participate. I don’t want to see VEX IQ be effectively limited to 7th grade and below. I agree that 8th graders, in almost all circumstances, should be allowed to compete in IQ.

On behalf of the Game Design Committee we want to thank you for starting this valuable discussion and providing feedback regarding the VEX IQ age limit. We also received multiple correspondences from team leaders outside of this forum. Our committee has had time to discuss with our VEX IQ program specialists and have decided upon the following new wording for the definition of Student. We hope this new wording clarifies our intent and eases the concerns of any students who feared they were ineligible as a result of the previous definition.

This wording will be included in the updated version of the manual being released on June 15th.