I finsished this bot today currently it has a chain driven steering but im changing it to gear steered when i took the pictures the chain was broken and hanging down under the front other wise this bot worked exactly how i wanted it to. Its fast and with gear steering it should me manuverable. The picture is attached 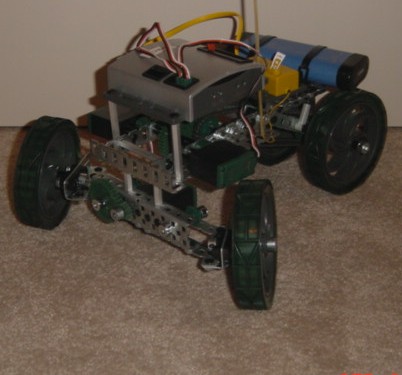 this is what i call an SUV: Science -Utility -Vex! try this at home…

Very nice. You should post a close-up picture of the steering mechanism.

did you have to cut or bend any parts.

I cut two pieces and didnt bend any, these are my pictures of my final addition of the bot. I replaced the steering mechanism with a more realiable type that was a complete experiment. I used a piece of chain about 2" long and zip tied it on the ends onto a flat 1x1 piece and used the sprockets and a motor hooked onto it. look at my pictures that are attached. 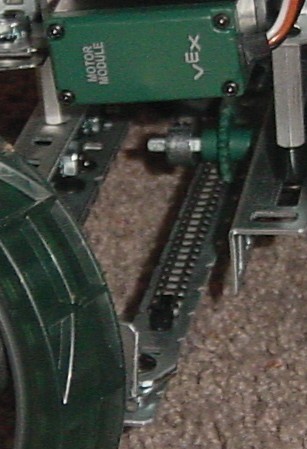 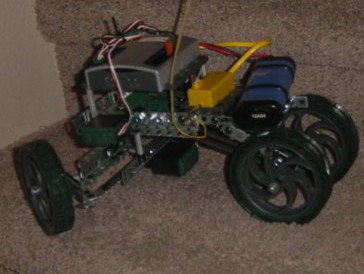 Could you post pictures of the underside? And a detailed drawing of the turning mechanism? Also is it just 2w drive?

My Camera died so i cant take any more pictures today. It is two wheel drive but two motors power them so there is plenty of torque and it is fast its kinda difficult to steer because if you bearly hit the motor it steers alot but after a hour of driving it is alot easier. Ill post pictures tomarrow.

My Camera died so i cant take any more pictures today. It is two wheel drive but two motors power them so there is plenty of torque and it is fast its kinda difficult to steer because if you bearly hit the motor it steers alot but after a hour of driving it is alot easier. Ill post pictures tomarrow.

Maybe try shifting? It is a bit difficult but would be worth it!

i dont rember the site but, they had a flat toothed piece that perfectly meshed with the vex gears. so if you wanted to you could buy and use that instead of the chain.

thats a very innovative use of chain. using it as a rack and pinnion. i might have to try that.

Thats a neat bot. The chain thing is a great idea.

nice bot! i have one question ,how many chain kits did you use?

I like the concept but some people may find it easier to just go buy the swerve drive kit from VEX. However it is very original and the team i’m on tried to do something similar but failed. Your design is pretty good but it looks like your chain system could fail if a heavy load was applied such as a robot pushing against it. Do you plan to use it in competition?

Good prototype concept. Looks sturdy, but if someone hit it, it looks like the swivel wheel joints could bend, leaving it in catastrophic locking up of one of the front wheels.

It would be rather interesting to used treads for the back wheels.

The swival joints in the front are very sturdy the only draw back is that i have lock nuts on the joints but even still they tended to loosen up quickly. I took that robot apart a while ago to try a diffrent robot but i will try to build a proceeder to that one with new and more reliable mechanisms

interesting design. I’ve been toying with the Idea for a four wheel drive four wheel steering setup. Not sure what I’d use it for but I’m sure I could figure something out.