My students discovered this neat trick today. It works for phones of all sizes, even the iPhone 6+ 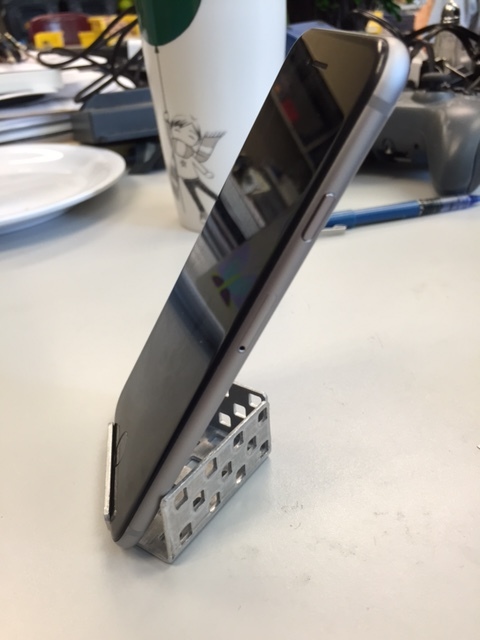 The photo shows a phone without a case, however, it works with all sorts of cases too.

Now we can put it on our robot, use a few rubberbands to secure it, then drive around filming! As an alternative to a GoPro, of course.

Now we can put it on our robot, use a few rubberbands to secure it, then drive around filming! As an alternative to a GoPro, of course.

I have used an iPad Air on a custom stand that I made using a steel plate, standoffs, thumb screws, and rubber bands. I then attached that to the turn table (or turret) and then put that on a small robot that was our “spirit” bot as it had the mount, option of a Go Pro bike mount, flags, and our spare team plates. We then used the facility WiFi to face-time the iPad and drove it around the complex in our free time. With this we were able to watch the matches at the competition while remaining in the pits, while the camera on the iPad in the pits sent a video of the events list so the teams that were in the competition room could see what alliance they were on. It was really cool and we got great video, but it did end up putting 2 cracks up my iPad’s screen (luckily it was the school’s iPad that they issue the students and I had it insured) so I would be careful when adding a mobile device to the robot. Though if you do end up doing something like this, I recommend using and old PIC with crystal and not VEXNet, you get a better range from it.

Run Skype on a phone and video call it from another device. You can now drive it remotely. This is a concept my team calls a “Skype bot.”

There are probably more efficient ways of doing this of course, but this is an easy one.

I have consulted the Lemony gods and apparently is a compound word, Skypebot. Sorry to mislead.

I’m currently working on a few 3-d printed phone stands/holders for my robot. I might post them here later if they prove to be any good after print them.

Fascinating, cheap, and useful trick! Looking forward to a lot of awesome reveal videos this year then

not to exclude ours, of course.