Please evaluate the following situation and specify whether a disqualification for pinning would result after the first five seconds of the driver controlled period.

<SG3> A Robot cannot Pin or Trap an opposing Robot for more than five seconds during the Driver Controlled Period. A Pin or Trap is officially over once the Pinning team has moved away from the teams are separated by 2 feet (approximately one (1) foam tile). After ending a Pin or Trap, a team may not Pin or Trap the same Robot again for a duration of 5 seconds. If a referee determines this rule to be violated, the offending Robot will be Disqualified for the match. There is no penalty for Pinning during the Autonomous Period.

Pinning – A Robot is considered to be Pinning an opposing Robot if it is inhibiting the movement of an opponent Robot while the opposing Robot is in contact with the foam playing surface and another Field Element.

Trapping – A Robot is considered to be trapped if an opposing Robot has restricted it into a small, confined area of the field, approximately the size of one foam field tile or less, and has not provided an avenue for escape. 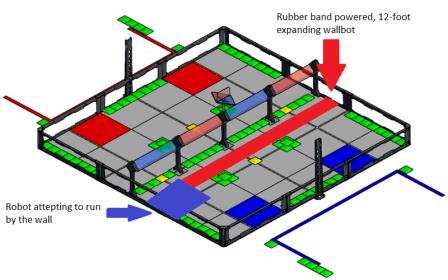