Are the V5 motors powerful enough for this

So If I the motors had 100 RPM cartridges would this run for maybe 30 secs? 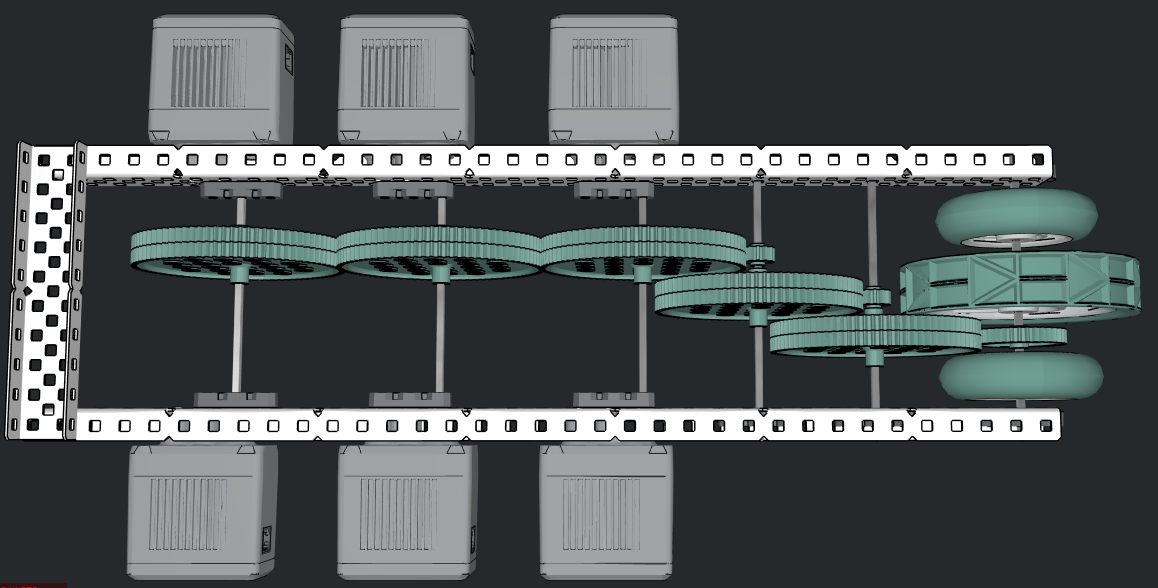 If you use the 600 rpm cartridges and take out a stage of gears, it would run slightly a little slower, but a little longer and with much less friction

Okay, lets do some math here. Assuming you are using a torque (100RPM Red) gear cartridge, this ratio would yield an end wheel velocity of 14,700 RPM. For standard 4in wheels that would end up putting your robot at ~175mph. Impressive.

However, there is a cost for such speed. Multiplying your torque by 1/147 yields, for a gearbox with 0 friction, 0.057 Newton meters at the output axle. Converting this to in-lbs give us 0.5 in-lbs. Divide this by 2 in (radius of wheel) and we get a total pushing force of 0.25lbs, which isn’t much.

Spining those wheels that fast will likely explode the wheels. Plz don’t do this. But if you do, record it so the rest of us can enjoy.

I’m thinking, with some grease and a Balanced wheel, it probably would have gotten to 3k+ rpm.

See this tread for some math Godlike Speed Racing

For turning point, we tried a flywheel shooter. At some point, it got to about 4000rpm and at that speed, VEX 4" traction wheel tires on the shooting stage were expanding by good half inch. Eating into the balls upon contact…

The faster the platter spins, the faster an HDD can perform. Typical laptop drives today spin at either 5400 RPM (Revolutions per Minute) or 7200RPM , though some server-based platters spin at up to 15,000 RPM! The major advantage of an HDD is that it is capable of storing lots of data cheaply.

You should probably hide behind a blast shield for this experiment. Also don´t expect anything to work after that experiment.

if you use 2 motors going in opposite directions you’re not going to get the full speed of the motors because 1 might be gong ever so slightly slower or faster which could cause a lot more problems
also i wouldn’t use the green 12T gears, use the high strength 12T if you have them

Also since you are running the wheels up to speed and then dropping them on the ground, I would strongly advise watching out for shock loads, as the motors suddenly have a spike in loading due to hitting the ground.
Also you may want to invest in full body armor, a helmet, face shield, and some riot shields as well as some excellent insurance. Not joking, stuff going that fast can do quite some damage.
As a matter of fact, I would not even drop the robot onto the ground, as any slight disturbance at those speeds could be amplified by the high speeds and lead to the robot pretty much breaking itself apart.
Your wheels will most likely not work at those speeds and will most likely disassemble. Expect this thing to be a one trick pony. It most likely will not run a second time.
Finally, keep in mind that it´s one thing to hit high speeds. It´s another thing to control those speeds. There´s a reason why 300 plus mph cars are so hard to make. I highly doubt the vex parts will be able to stand up to that much stress.

Build at your own risk

Edit- Don´t forget that at this speed, even a small rock or pebble would cause the bot to spin out of control, especially if you dont have steering.
Deceleration is also going to be an issue, as I´m pretty sure that a robot collinding head on with a wall at 150 plus mph is going to be pretty bad. You already know what that sort of crash does to cars. I don´t want to know what that would do to a robot.

Plz don’t do this. But if you do, record it so the rest of us can enjoy.

I second this statement

in the video posted by goofnrox if you go to the time 2:30 is will show you the axle and since vex uses steal axles its likely that they wont melt like plastic but more break because of all the force being on them at once so i’d advise you to use the thicker high strength axles instead

Here is what i’m thinking.
Phase 1: Design and get blast shield.
Phase 2: Prototype and test if it will handle it.
Phase 2.5: Maybe think this is not a good idea
Phase 3: Apply prototype to an actual frame.
Phase 4: Find a way to steer without destroying everything.

So… what should we name this.

I can see what you mean here but I was thinking something like a car turning so that way there are three points of contact. 1 is the back wheel of death and the other two are up front.

The front two wheels will be like how a car turns. A motor will turn a mechanism that will rotate both wheels the same direction. I will send a picture soon.