My robot arm(s)
(im not sure whether to classify it as one or two)
but anyway when i make it go up with the controller, instead of staying to the level that i leave it at, if i let go of the controller, the arm goes down.
Here is proof of the problem: Oof, that is extremely wobbly, get some supports on there. Either, it’s because there is a lot of weight acting on those two motors (the ones at the top of the arm are quite far up, so obviously they would struggle with the moments. Or, it’s something to do with the code (did you intend it to stop?). Potentially add elastics to aid those motors and try and see if you can move those motors closer to the pivot. The motors are acting independently which is what is causing it to twist around sometimes. What gearing are those motors using?

Is it possible to reduce the weight at the top, by using only one motor there?

yes, i am only using one, there other is there for stability but even without the second motor, the smae problem occurs

Ok, well DEFINITELY find a way to allow you to remove that second motor, the weight is not going to help you moving forward. Try adding elastics to help those motors to act against gravity. A 5:5 ratio is the same as direct drive.

Do you know how to add those elastics on?

As for having the arms stay up, some teams have used PID to keep it in one place. If you make the gear ratio for the arm high enough (or if you add enough elastics), the arm can stay in place (but note that it will be pretty slow).

First off you will not lift the risers paralle to the ground wich will make scoring them harder. second of all 1:5 is definetly not enough. i would go with a 1:15. also it may have to do with something with programing. you might be using the brake command rather than the hold command wich will not let the arm move when stoped.

It would be extremely easy to remove on of those motors. Put a motor inbetween the two pieces on the arm (idk what they are called in iq), with gears on the outside of one of the sides (left or right) connecting to shaft used by the claw (if it is a claw?). This would be a lot less strain on the motors, and the addition of weights won’t be needed.

What coding language do you use? It looks like you might have it set to motorCoast or something similar where it basically ‘unlocks’ the motors whenever they aren’t moving.

i didnt use any prograaming, but i used vexcode to calibrate the controller

no, could you pleae tell me how to use them?

For lifts, you have to set something called “motor holding” on. This generally prevents them from going down.

should it be this?:
Right_Arm.setStopping(hold);
return 0;

Set the left arm to holding as well and I think it should work.

Although this is unrelated to your problem, I just want to let you know that I can see you are trying to build a four-bar lift, and you’ve built it just a bit wrong.
I would recommend this video for some help: 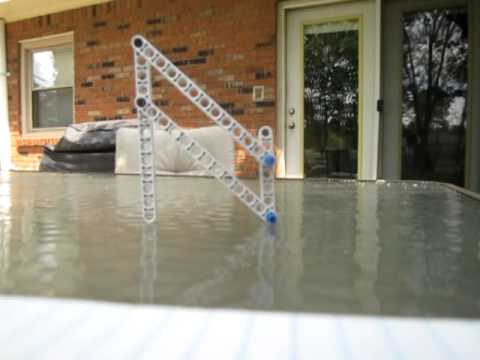 But the main takeaway is that for a bar lift (like the four-bar) all moving bars in the linkage should be connected by pivot points. (correct me if I am wrong on this one.)

Edit: That video was really only about the four-bar, so i need to link this video too that talks about all the bar lifts: 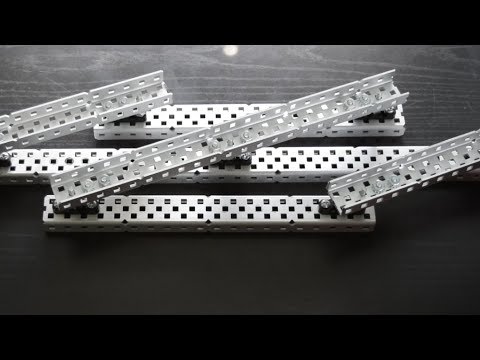 @Noah10851B the current design he sent is of a 2 bar. it’s what most vrc teams used in tower takeover. it does not induce parallel motion, but it can be just as good as a 4b linkage if done right (also note that not all 4b linkages are necessarily parallel, or even connected directly by joints [theres something called a ground link, which is essentially the distance between two offset joints that consists of the frame of the assembly and doesn’t move] but in vex almost anytime someone refers to a 4b, they are talking about a parallel linkage)

anyways sorry for the slight tangent; all you really needs to do mrbanjo to fix the issue is add bracing and elastics (and potentially more torque). if your arm begins to get too long, you may want to consider switching to a 4b linkage, or adding contact bearings that constrain the side to side movement of the arm. some code could definitely help as well, but since that’s not my expertise, from a mechanical standpoint the best way to fix this is probably just with some better bracing. hope that helps (no idea if it’s best in this game to have a parallel lift or not, since i dont follow along with iq stuff. if you need parallel motion, definitely switch to 4b)