As we take the cubes apart from last year

Any particular advantage or disadvantage to the pins 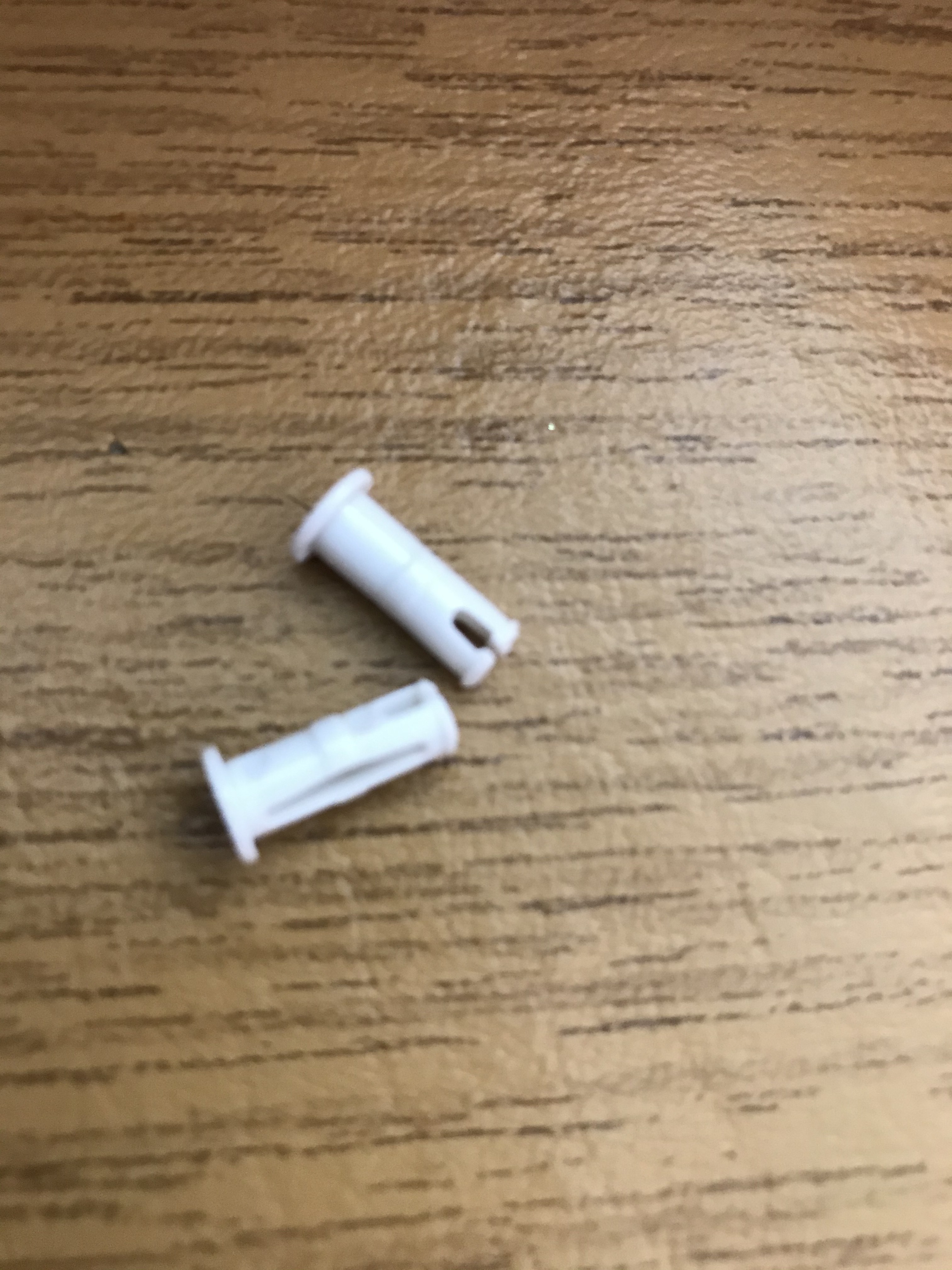 The only advantage I see is being able to insert them from the outside. Thoughts?

You should pull them out and mail them to me!

Yes, these are great, they have better holding power than the standard 1x1. The top keeps them from pulling through

So just to be clear, most of the VEX parts are choking hazards. Is this really what you wanted to post?

Are these pins not pins that you can get with the standard pin packs, like the capped connector pin pack?

Yep, same ones. Except with the 2019-2020 game there is about a dozen on each cube, so you can harvest quite the stack. Lots of the Hexbug robots have them/use them because it makes the robot that more robust.

I don’t think our program had many of these pins before, but like Foster pointed out, we’ll have a bunch now

That’s a good point about pulling through. I’ll have to get the kids thinking about which way the forces will be acting to appropriately insert these pins

Removal needs a flat blade screwdriver to help pry. The new plier tool works (I need to do a review on it) Getting them out is a pain, sometimes it’s easier to pry the two beams apart.

A side bonus is you can also use them to hold a paper decoration at on the same time.

Now if we could get one with caps on BOTH ends, to hold super strong sections

Double-Capped pins would be great for things you don’t ever want to come apart during or after a competition.

What about a 2 part pin?

If you try hard enough, this already exists with IQ legal parts. And it makes for a pretty ridiculously strong connection.

@ChrisR246 Any white colored piece in vex is much stronger than the normal blue/black ones so the white connector pins are really valuable to put in places where key reinforcement is needed like attaching the brain or connecting two parts of the drive train together.

PS. Why do you think VEX uses white pins to put together game elements…

Last year for you arm to lift the cube, we had attached the main lifter part to the arm using already-used blue connector pins but it fell off immediately when we tried to lift a green cube. We then tried it with brand new blue pins and it lifted halfway then fell off again. Then, a friend of ours recommended to use the white pins in the cubes and it held like magic and we never had to deal with it falling again.

This is correct. The only “weaker” pins that are denoted purely by color were the original 2013-era maroon 1x1 Connector Pins. But we didn’t like how weak those were, so we intentionally increased the holding force when we switched over to blue parts for VEX IQ and launched HEXBUG VEX Robotics kits in 2014.

The colors of parts in all VEX IQ, VEX IQ Challenge, and HEXBUG VEX Robotics kits available after that have been a mix aesthetics/design, usability, and commonization where possible. Both the normal 1x1 and capped 0x2 Connector Pins have each been made in about a dozen different colors over the years.

That being said, nearly every snap geometry part available in the upcoming VEX GO kits will have an intentionally weaker snap to improve usability for younger students. These weaker VEX GO snaps will be similar to the original 2013 maroon 1x1 Connector Pins. Since the IQ snaps were intentionally made strong to withstand the rigors of the VEX IQ Challenge, we wanted a way for users to be able to tell the difference if IQ and GO connector parts ever get mixed up.

Since we could not rely on part color, we instead changed the shape of the flange on the VEX GO pins, standoffs, and corner connectors. Whereas all IQ snaps have a round profile at their flange, all of the weaker VEX GO snap parts will have a hexagon flange. 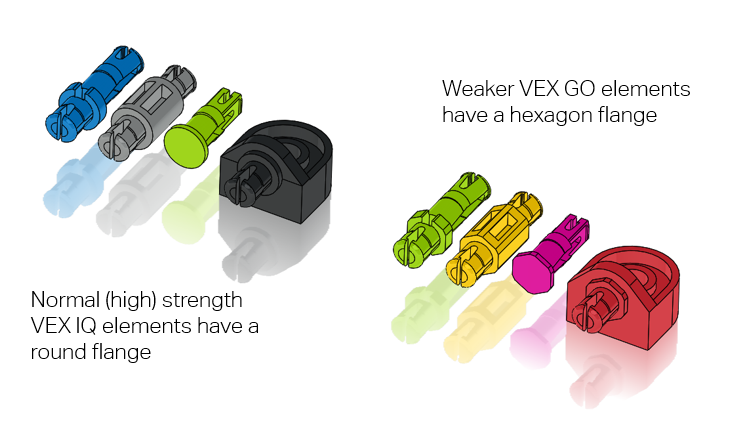 I meant for a joint: 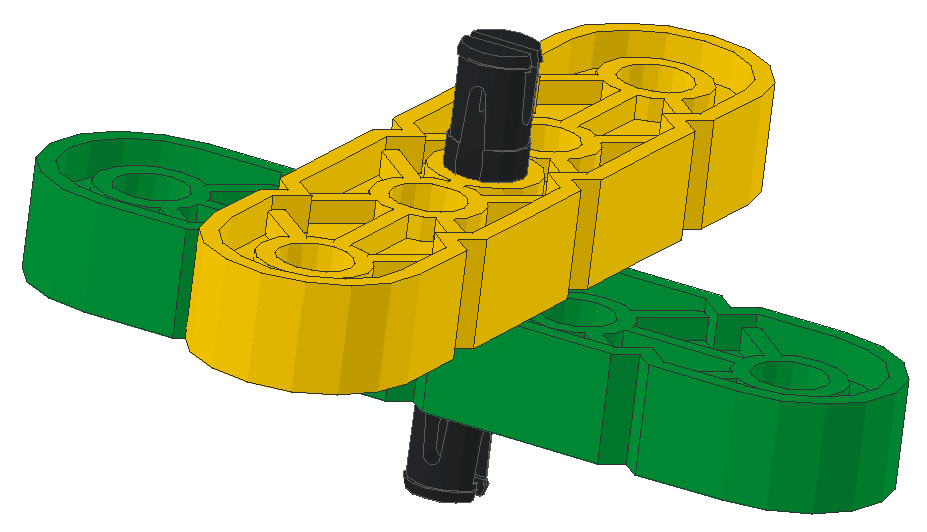 So you can put a shaft collar on each end of the 2x2 sticking out. They used this for high stress joints on lifts.

Unless I’m missing what you were getting at!

@sankeydd
Yea, we sort of missed each other. We use the 0x2 to put frames together, We had some of the roboteers that used the 2x2 with the collars to also frame with.

Using the 2x2 pins with collars sounds like a great joint idea, I’ll put that in my idea pile.

@Art_Dutra_IV
Thanks for the insight to how the Go pins will work. Happy to hear that they will be a little softer for little fingers. My grand child struggles with some the pins, but the new pliers are working out pretty well. Can’t wait to see these on the shelves.