I’d like for this thread to be similar to this one, but for Autodesk Inventor. So, if you have any tips/tricks or best practices for building VEX robots in Inventor, post 'em here!

(I’ll see if I can get some made, but I’m really busy at the moment. Maybe after worlds…)

My tip would be to use mirroring and copying to its fullest in order to not waste any time.

I would direct you all to this thread as a place to start.

Drbayer had started to post several tutorials on youtube, here’s the link from his thread for reference.

I taught myself Inventor last summer, I started using the 4 downloadable units posted here, these are part of the Autocad VEX Robotics Curriculum which many schools will have if they bought classroom kits.

Learning Inventor is not that hard but realize that it will take perhaps 40 hours of use before you feel comfortable and able to design your VEX robot. Most of what you will be doing is assembly using existing parts, this is somewhat easier than creating parts from scratch which is where many training courses will start.

After worlds we could maybe tackle one subject per week, set a task for everyone who is interested, say placing a wheel on an axel, putting that between two C channels, and then discuss how we all approached the problem. I bet by July everyone would have enough skill to experiment with designs before building them.

Most of what you will be doing is assembly using existing parts, this is somewhat easier than creating parts from scratch which is where many training courses will start.

Creating parts from scratch on CAD is the worst thing I have ever done in my entire life.

The CAD forum is not very active but I’m going to try and get this thread going as it’s the CAD season again with (hopefully) lots of new designs underway. I’ve learnt just enough about Autodesk Inventor to have realized that I need to be changing the way I do certain things to improve productivity. The first thing I wanted to tackle was adding bearing flats, screws and nuts to a design as this has been taking far too much time.

So here are my first ideas.

Here is how to add the iMate.

Open a part, select iMate from the manage menu on the ribbon. A dialog like the constraint dialog will be shown, in this example select insert and then the circle as shown below. 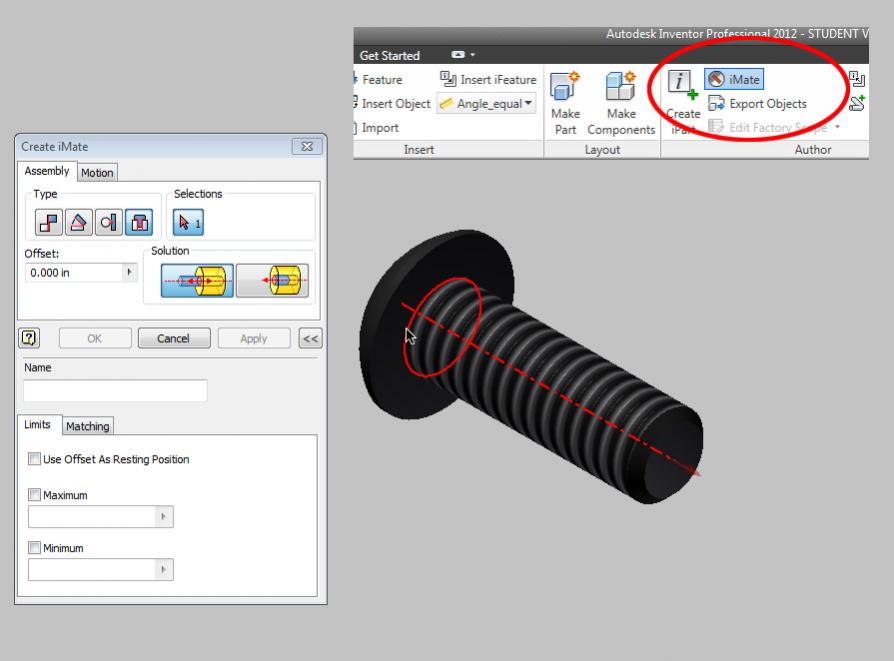 Save the part (or a copy)

In a new assembly place the part. When the part is selected the iMate glyphs will be shown, we only have one here, it’s the white blob.

ALT click and drag the glyph and drag onto the desired hole. 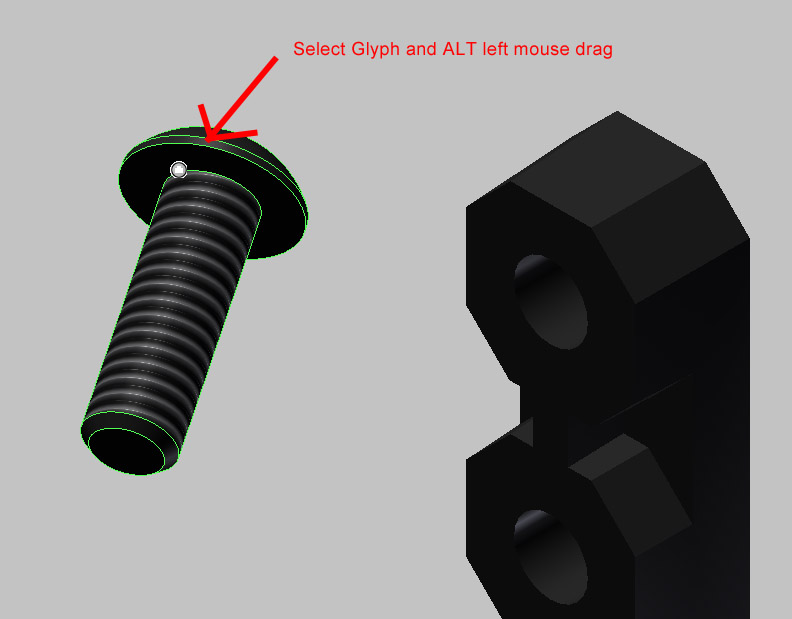 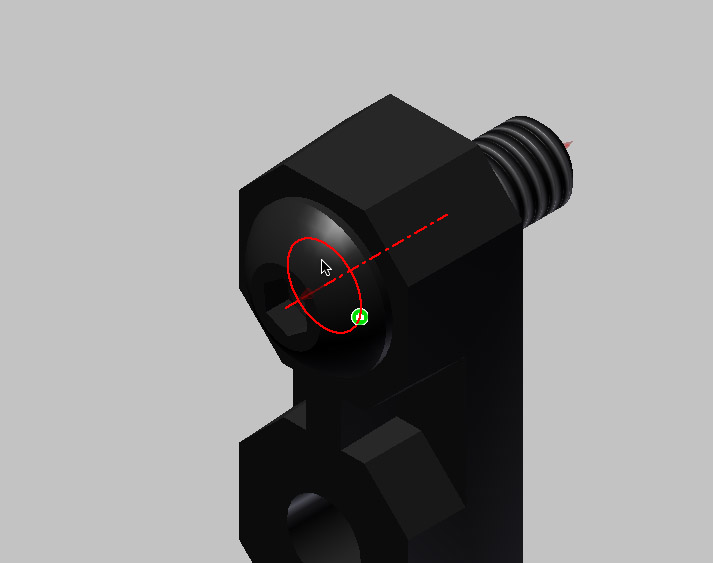 There is lots more that can be done with iMates. For example, if the iMates have names then Inventor will try and match the iMate names between two parts when ALT dragging one onto another.

In part two I will create a bearing block assembly with two screws and two lock nuts along with iMates ready to be placed onto a structural piece.

Part2 of using iMates, this will take two posts as there are several attachments.

We are going to create an assembly with a bearing flat, two 8-32 screws and two lock nuts along with iMates that can be quickly added to structural parts. In the past I used to do this the hard way, something like this.

Lots of work, 5 parts and 9 constraints.

So to make this easier we will create this assembly. 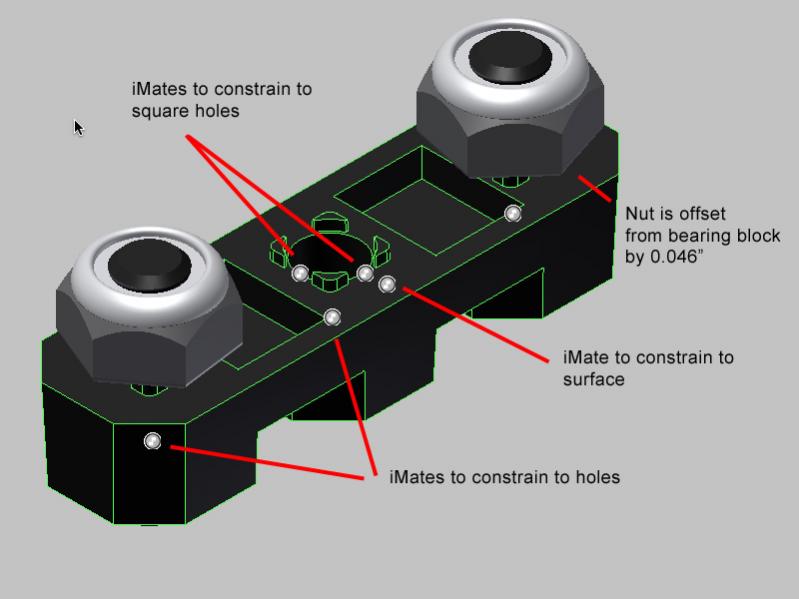 Start in the usual way by creating a “Standard.iam” assembly. Add the bearing flat as the first part. The bearing flat in my library is not located at the origin, life is easier if we move the part to the origin and constrain it to the X, Y and Z planes of our coordinate system. The reason for this will become clear at a later stage.

The part will be initially grounded as it is the first part placed, unground the part and then add three mate constraints (to the XY plane, XZ plane and XY plane) to relocate it to the origin. Finally add an angle constraint between one edge and an origin plane to stop it rotating. This is how things should look, the origin planes have been made visible for clarity. 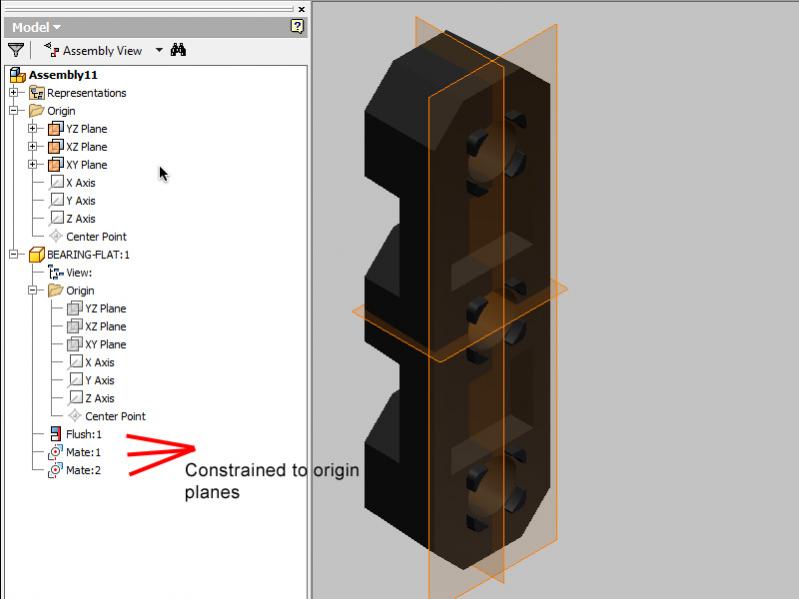 Next (and this is optional) add three iMates to the three holes, these may be useful in the future depending on how the final assembly is used.

Add two 8-32 screws 0.5" long. Constrain them using an insert constraint into the two end holes, in the image below the screws had the iMate from my last post so this could be used to make this step quicker. 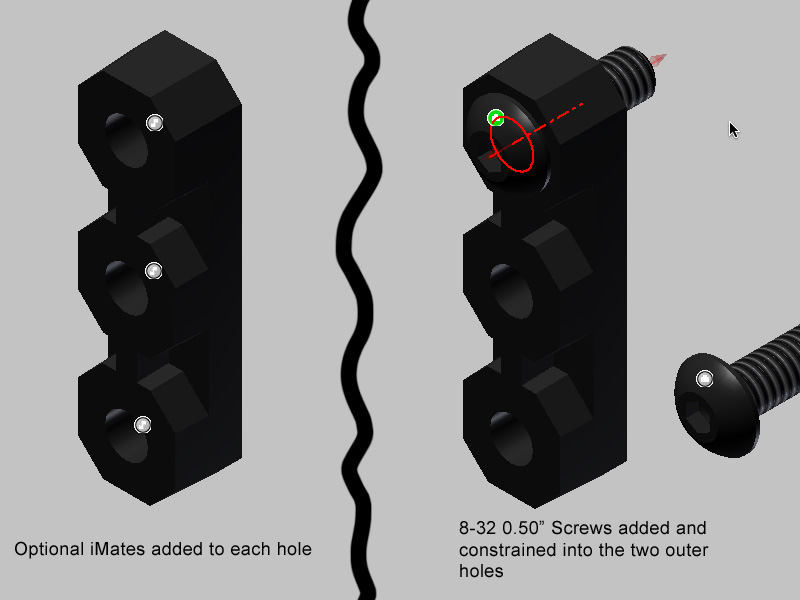 Now we need to add the two lock nuts. Each nut has two constraints added, the first is the hole in the nut to the axis of the screw. The second mates the flat surface of the nut to the underside of the bearing block, this constraint has a 0.046" offset applied which is the thickness of the steel structural parts. 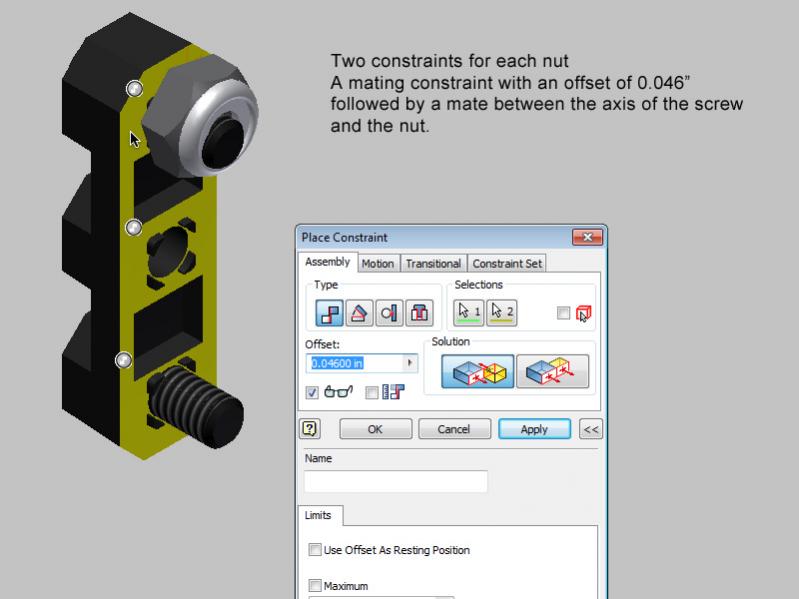 Now we need to add the iMates to be able to constrain the bearing block assembly to the square holes in the structure. The square holes are exactly 0.182" square. Unfortunately there is nothing suitable to use on the bearing flat, the small protrusions on the underside are angled and cannot be used, the sides of the bearing flat are also angled. To achieve the necessary geometry we will create two work planes, as we have already located the bearing flat at the origin this is quite easy. Offset a work plane from the XZ plane of the origin by 0.091" (half of 0.182), add a second work plane offset by 0.091" from the XY plane of the origin. With the planes visible it should look as follows. 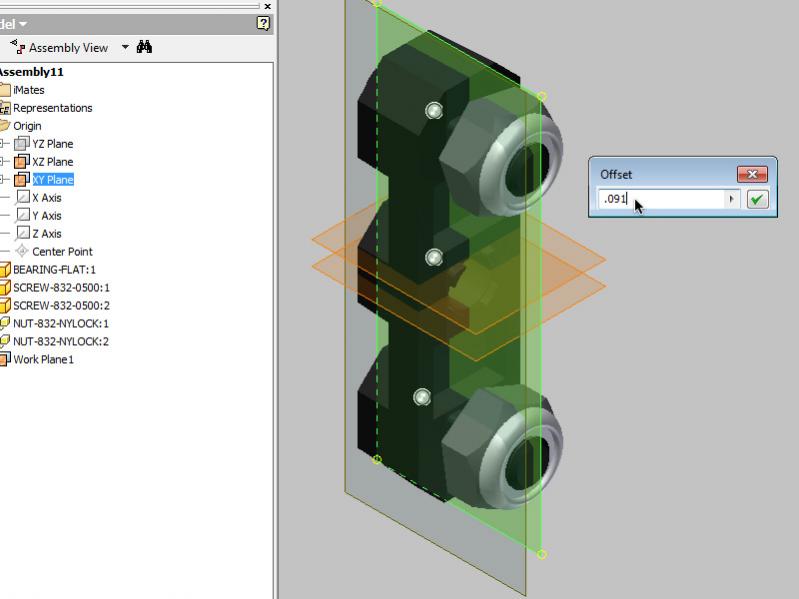 Now we can add an iMate to each of the two work planes, the easiest way is to select the work plane in the component list on the left hand side of the work area then select the iMate option in the ribbon. The two new iMates can be seen in the following picture (as are the original three hole iMates).

One final iMate is added to the surface of the bearing flat that will mate with the structural part, this is not on this image.

In total the part has 6 iMates, three for the holes and three that will be used to constrain to a square hole. 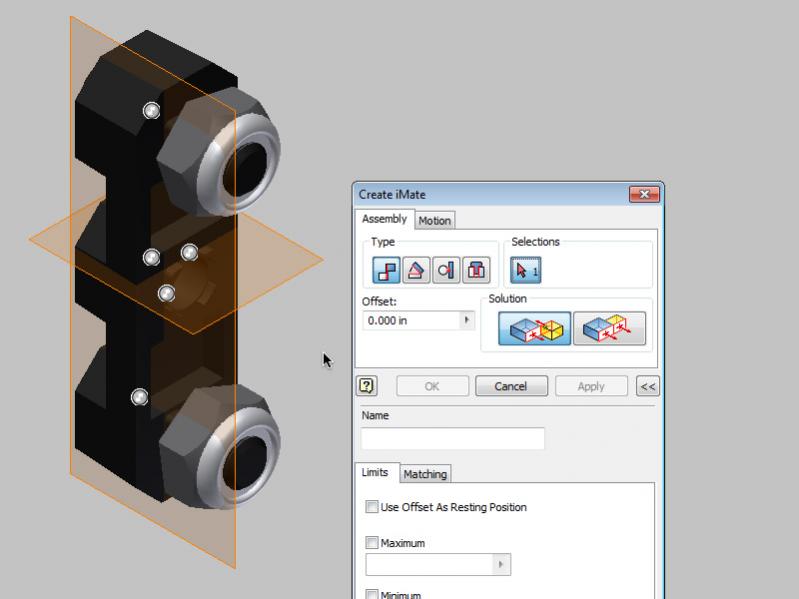 Now turn off visibility on the work axes and save the assembly with a new name.

To use this new part, create a new “Standard.iam” assembly and place a structural part such as a c channel. next plane the newly created bearing flag assembly.

To constrain the part to the c-channel ALT drag each of the three iMates in turn, two will be used on two adjacent inner surfaces of a square hole, the third to the surface of the c-channel. It may take a little practice to figure out where each one goes the first time around.

After constraining it should look as follows. 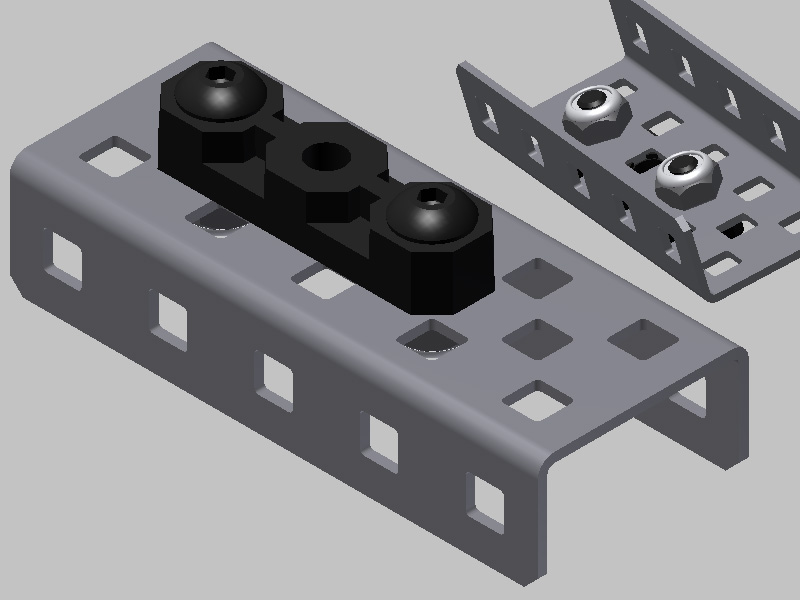 So we have reduced the necessary steps to achieve adding a bearing flat along with screws from the placement of 5 parts and adding 9 constraints to adding one sub assembly and three quick selections and movements of the mouse.

This may have been a little hard to follow so here are the project files for the bearing flat sub assembly.iMateExampleBearingFlat.zip (435 KB)

Part 1 covered adding a single iMate to a screw to allow quicker insertion into a hole.

Part 2 covered the creation of a bearing flat assembly and adding iMates to allow quick constraining to the square hole in Vex structural parts.

In this third and final part, I will give a small example using a composite iMate to make constraining gears (and anything else with the same size square hole) to axle shafts quick and easy. My normal way of constraining gears is to use two mate constraints on the flat inner surfaces of a gear to two adjacent faces of an axle, the gear can still slide along the axle but will rotate when the axle rotates.

Step 1 is to add iMates to the axle, open the part SHAFT-3000.ipt and add two mating iMates to the top and right faces of the axle, rename these Top:1 and Right:1, keep the two iMates close to each other so you know they are related. Repeat this step and add two more iMates futher down the shaft and rename these Top:2 and Right:2. You should have something that now looks like this. 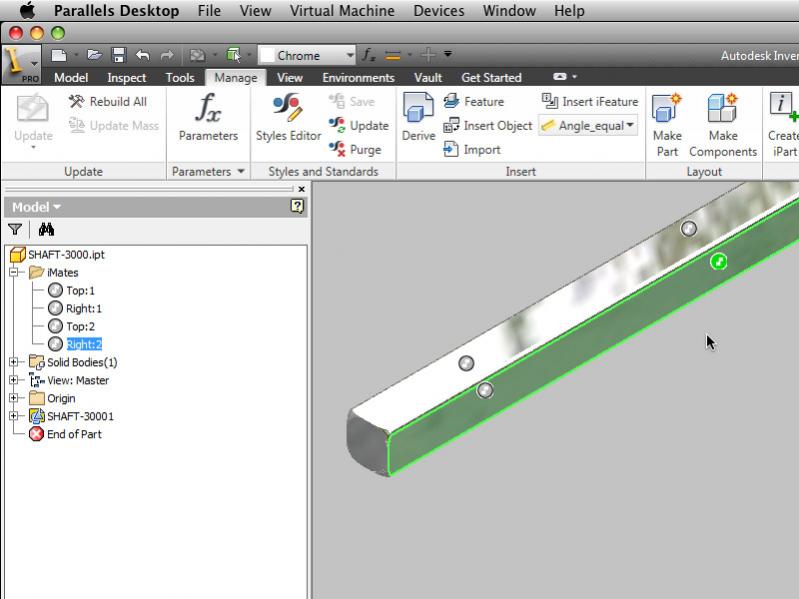 Next select Top:1 and Right:1 in the Model browser and right click, select the option to “Create Composite”, optionally rename this newly created composite. Repeat this for Top:2 and Right:2. We have created two composite iMates, this will allow two different gears to be quickly constrained to the shaft. Further composite iMates could be created if you feel that two is not enough. 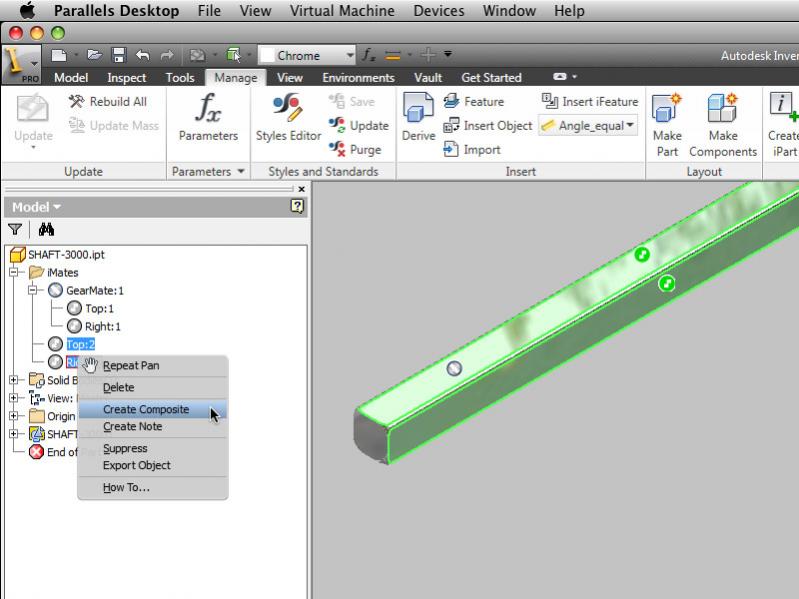 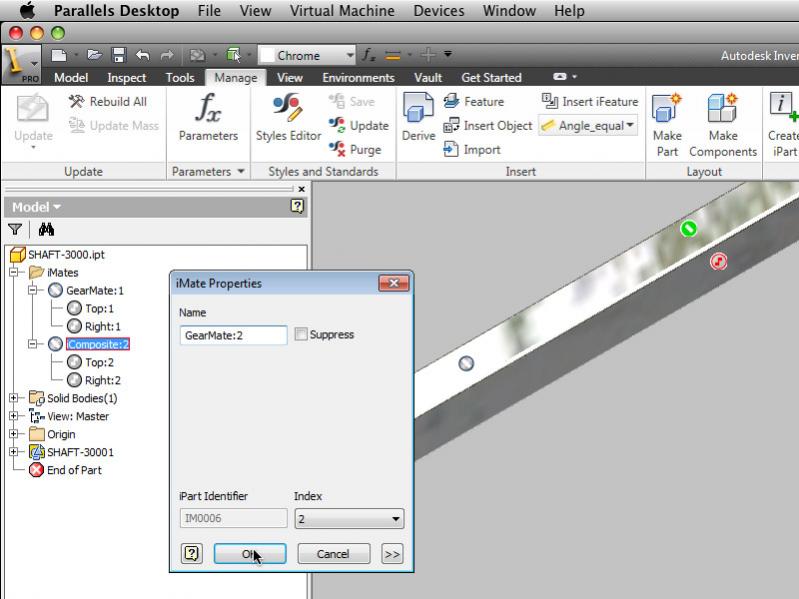 Open the part VEX-12-TOOTH-GEAR.ipt and add two iMates to the top and right hand side inner surfaces of the shaft hole, rename these Top and Right. Create a composite of these two iMates and again rename this as AxleHole. 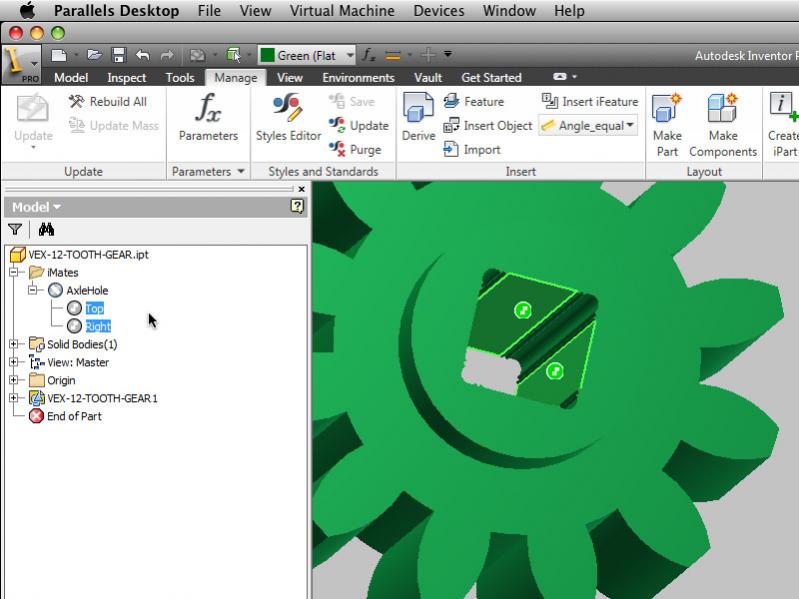 Create a new “Standard.iam” assembly, add some structure and a bearing flat or two for the shaft to rotate in. Place the SHAFT-3000 part and constrain into a bearing flat hole.

Now place the VEX-12-TOOTH-GEAR.ipt part, it will probably be automatically constrained straight away to the shaft as Inventor trys to match iMates when parts are placed by default. This behavior can be disabled by right clicking the part and un-checking “use iMates”. 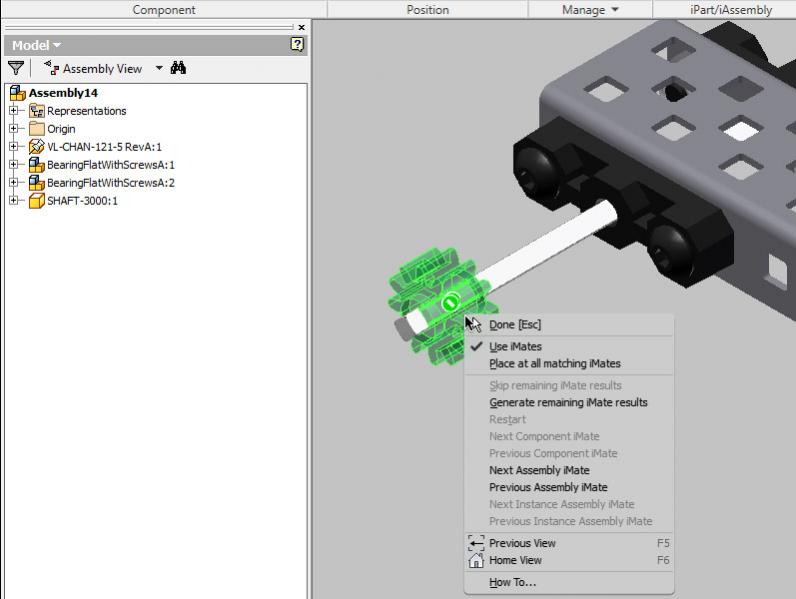 A second gear can be placed, if the “use iMates” option has been un-checked the part can be ALT dragged to the matching iMate on the shaft as in the previous examples. Here is how the final assembly looks. 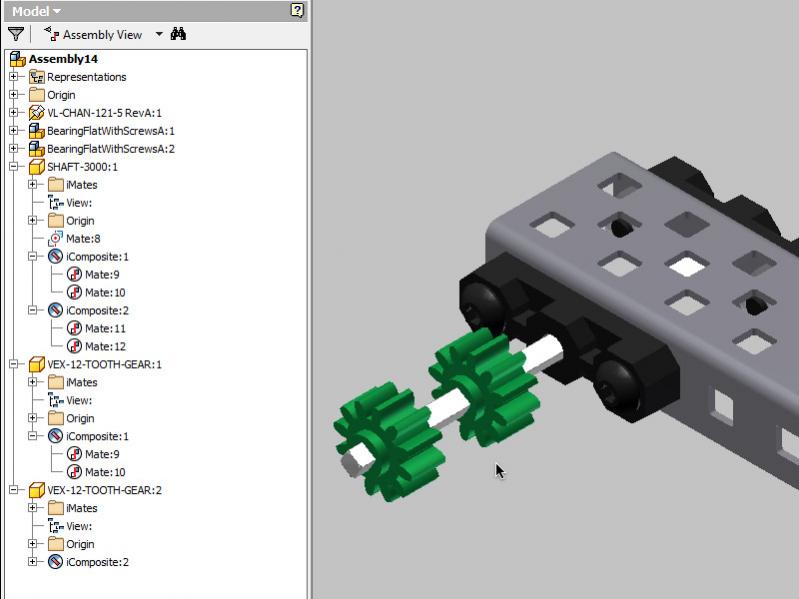 I recently started using iMates to assemble VEX components. I teach a PLTW POE course that uses VEX for a lot of activities.

I did some work optimizing the VEX parts library to use iMates. I started with the parts available from Autodesk through the VEX Autodesk curriculum. These are 2013 parts and most of them have insert iMates created already.

I also created single part files for all of the “parts” that are assemblies (such as wheels, motors and sensors) mostly using the shrinkwrap tool. This makes it easier to work with the parts without having to worry about resolving links to files in subassemblies.

If you are interested in my library of parts, you can download it from this link:
http://www.mediafire.com/?kbpj4d9ijfho5uy

I created a video showing how to assemble parts using iMates. Here is the link:
http://www.youtube.com/watch?v=hOMfOagRDik

There is also some sample assemblies of sprockets with chain and tread on them. A video describing that procedure is here:
http://www.youtube.com/watch?v=UdZG0V_d7Gc

Thanks for the tutorials. They helped a lot. This library has tones of imates added already if anyone is interested.

I have been messing around with resizing parts in Inventor. My problem is that when I split a part to make it the right size I still see all the old iMate icons in the assembly. Anyone know the best (fastest) way to deal with this??? Also, a huge thanks to those of you who added all the iMates to the pieces!!!