So, I’ve seen two (or three) main types of autonomous strategies up to this point.

I think this is pretty straightforward, and what most people thought would be meta at the beginning of this year’s game. You grab a neutral goal, take it back to your side, and maybe go back for another or go for the AWP. This is the stock, standard strategy for 90% of teams I’ve seen.

So you think your robot isn’t fast enough. Or, you don’t want to risk it. Well, you’re in luck, rings are here to save the day. Autons similar to 99999V’s can still perform very well with 24-27 points being able to be scored, more than a neutral goal. Downside? You don’t start with a neutral goal in driver. Obviously, a combination of 1 and 2 would be ideal, but many teams are not at that level just yet.

Solo AWP. You love them and you hate them. You lose out on auton bonus (probably) and neutral goal advantage (probably). But you get a guaranteed win point. Which… 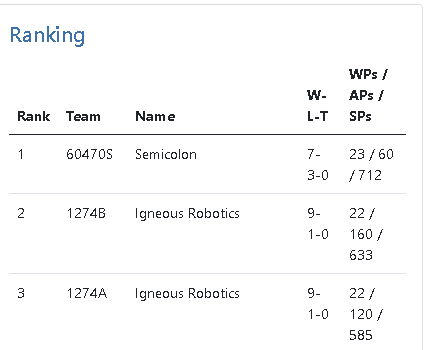 Let’s just say it’s pretty good. You can get away with losing in qualifications. You can even get away with throwing auton by doing this solo AWP most of the time. If your driver is good enough, or you have a too easy/too hard matchup, this is your pick.

Which do you think is the best?

AWP is insanely good. Being able to get it solo, especially in a region where not everyone can get one side of it is very helpful. You can also grab a neutral after doing the AWP, but obviously any team that tried to go for it first would get it. It is still a nice thing to have however.

you want to have your options open.
I think ideally you would have an auton that rushes for the neutral goals as quickly as possible, and then after that attempts to do half of the AWP. if there’s a tussle in the middle, you probably won’t be able to complete your auton, but that’s ok because you were prioritizing the goal rush. Most useful in very close matchups or elim matches.
I also think you should have a half AWP route which ignores or waits to rush the center, for matches where you have a partner that can do the other half and you’re confident in your ability to win even when neglecting the goal rush. And then I think you should have a solo AWP route for two scenarios. either for matches where all 3 of the other robots on the field aren’t going to be able to do much, so you know you can win the match but to get the AWP you need to do the whole task yourself. Or in matches that are so hopeless that you’ll accept the loss, but take the 1 win point you can get.

Good points that you brought up here. But what I’m more asking is: what would you run if you go into a match completely blind? No information on teammates or opponents.

That is a scouting issue, but lets say that happens. If so it depends on your region. If you need to goals to win the match then go for the goals, but if you think you can win then go for the AWP. The AWP bonus will help you a lot in rankings, even if you only get it 50% of the time.

what would you run if you go into a match completely blind?

unlikely to occur since at the very least I talk to all my partners and opponents well before my matches with them, but in the scenario that did occur I’d probably just eyeball my chances and go from there.

just be good and do all 3. Mogo rush only takes around 2 seconds, leaving you with 13 seconds to score awp.

It depends on the robots we’re up against and what our teammate can do. Both sides have about equal skill? I would go for the neutral and then the win point. Impossible to win due to being paired with a low level robot against two high level robots? I would go for the win point then to make sure the loss doesnt harm the rankings too badly. I cant really say one is overall better since it really depends on the situation.

Instead if this, you could have your partner add a wait time before grabbing a neutral goal to account for your robot’s movements. Although this might not be optimal in elimination matches (when everyone will be rushing the neutral zone), it may work in qualification and lower stakes elimination matches.

On another note, I feel like by World’s we will see teams with more collaborative autons, like what we saw in Change Up in China. Teams will be grabbing more neutral goals while still contributing to their alliance’s auton win point. And by eliminations, teams will be doing more ring scoring, and I bet we might even see some high goal scoring in auton.