How can i have autonomous and driver in the same program in v5 blocks? I’ve tried everything I can think of but I’ll still can’t figure out how to do it. I can’t use a field tower controller since I’m in open

Put it in competition code like you would when using a field control tower with your auton under the “when autonomous” hat and your driver under “when driver control” hat. Then if you want to do it like an actual match just select timed run when you go start the program. If you just want auton go to programming skills, if you just want driver just press run.

You can use the controller to start the program in the programming skills setting.

There are options to launch Driver, 15 second Auton, and Skills on the V5 controllers but if that is not your preference you can create custom functions (My Blocks) for each and call them in any part of your code.

In the example below pressing X during driver control will start Auton. 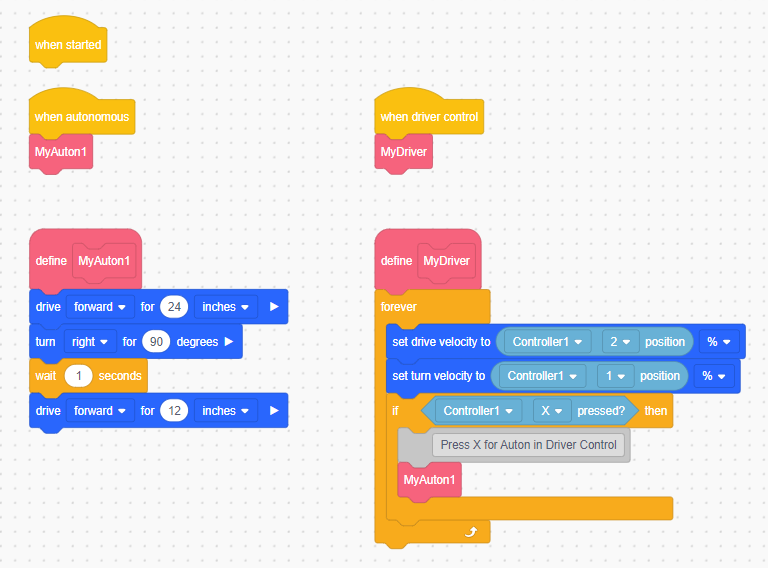 Assuming you are in the “CREATE Open” program, the answer can be found on page 8 of the game manual:

Autonomous Period – The first twenty seconds of each match during which time the robot may operate only autonomously using onboard sensors and pre-programmed commands. The autonomous period may only be initiated by either pressing a button on the robot or activating a sensor (i.e. placing your hand above a distance sensor close enough to activate the autonomous code).

In VEXcode blocks, you could achieve this by having a “when bumper pressed” hat block that runs your autonomous routine.