We just had a competition today. We had eight qualification matches. (28 teams) We only have an intake/extake + a roller mechanism. Our autonomous code worked for the first 4 matches, but then it didn’t work for the next 3. For some reason, it seemed like it would start the code halfway through because the robot did nothing for the first half but then continued from a point in the code. (The second image.) We also re-downloaded the code, but it didn’t fix the problem. Our mentor told us to reset everything, and it worked for the last qualification match. (Brain, controller, re-download code) The same thing happened with our programming skills, and it started working from the same point and did the extra stuff. (Our programming skills is our autonomous code + the robot alining for 4 tiles.) Does anybody else have the same problem?
Code: 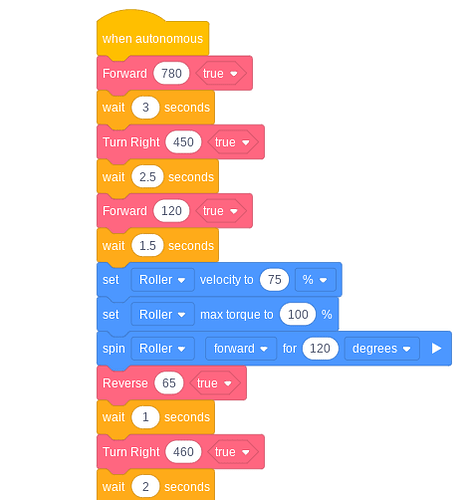 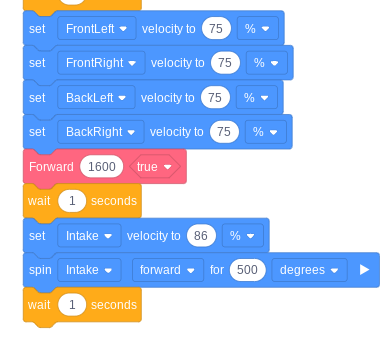 Note: We didn’t test it without resetting everything because when it malfunctioned, it made us go over the autonomous line, losing the bonus, and we were in the qualification matches.
Note: We have many, long waits because the functions are all “and don’t wait”.

send me the project if you like and I will take a look, hard to say without seeing what’s in the Forward block and what you do with driver control.

Do you have a setup part as well? It looks like your functions don’t alter the motor speed, so you may have the motor speed set to 0 in setup or somewhere else, then it actually spins them after the code gives them a speed, explaining why only the second half of the code works, which is the half that actually defines drive speeds.

This could be why, but it worked 100 percent of the time when we used a timed run. We can’t test it because it only happened when the controller was plugged into the field.

Do you have a competition tester? You could test it with one of those