Nothing is detached and there isn’t anything blocking it. We switched the claw and the ring motor and the claw worked but then the ring motor didn’t. So we are pretty sure its something with the block. 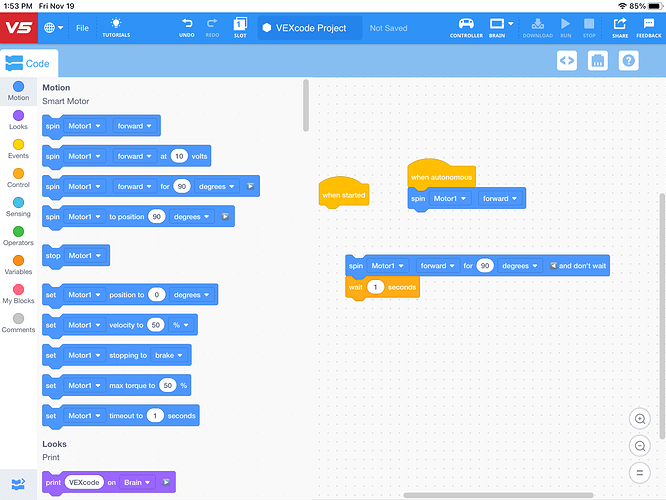 send me the project file, I’ll take a look.

Ok, thanks for trying

find the project file, it ends with .v5blocks.
send it to me in a direct message, or if you don’t mind it being public, attach to a post in this topic (just drag the file into the reply window)

and are you up to date with latest version of VEXcode ? if not, let me know which version ( file->About )

Here is the link, let me know if it doesn’t work.

We are also up to date on the latest version of VEXcode.

ok, I have that file.

You have claw control all over the place. You need to decide if the claw will be under control of the controller in the graphical configuration, or directly using code in driver control. But the most probable cause of your issue (I will run the code later) is putting claw control in the when started block (not to mention the multiple nested forever loops which make no sense, only the middle one of these will ever run). 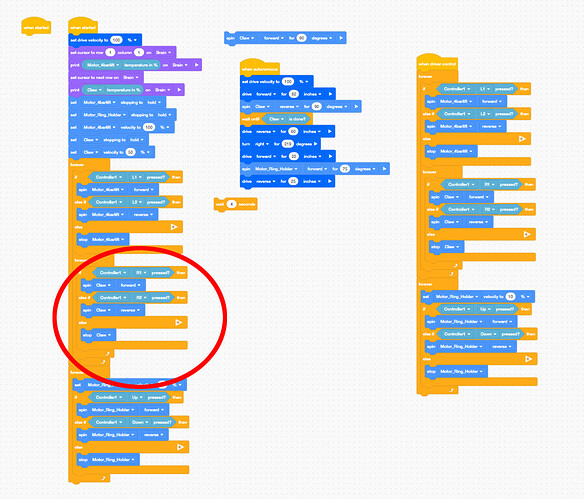 The when started block is not started and stopped by competition control, so that loop will most likely be sending stop to the claw motor when the autonomous code is running.

I’ll run the project later and send back a simplified version with all the duplicated code removed.

Ok, I will also test it out later, so you are saying that we should take the forever loops out of the coding so that its only set up in the devices. But why does the Motor_Ring_Holder work if the Claw doesn’t?

Ok, I will also test it out later, so you are saying that we should take the forever loops out of the coding so that its only set up in the devices.

choose one or the other, I would remove control from the controller device and just keep the code in driver control, but that code will need revising as it is currently incorrect.

But why does the Motor_Ring_Holder work if the Claw doesn’t?

because the only forever loop that’s executing is the one with the claw motor in, the final forever loop with the motor_ring_holder under both the whenStarted and WhenDriver hats will never execute.

Ok, ill try it out later tonight and get back to you!

I would suggest something like this if you want to use code. I left the drivetrain as configured by the controller. 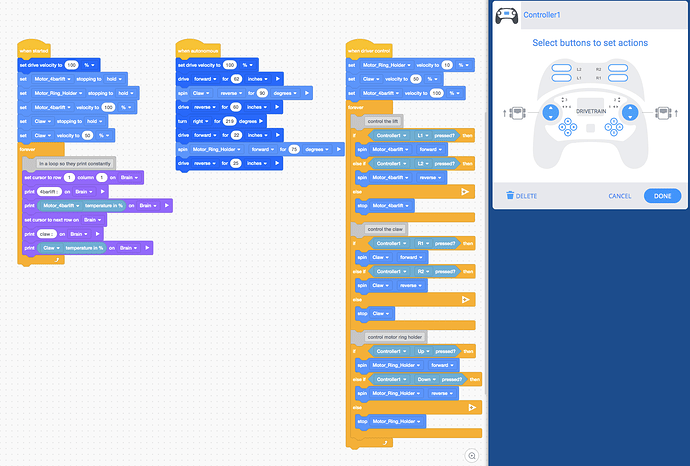 Thank you so much for the help, we tested it and it worked!