Ball Placement due to rules 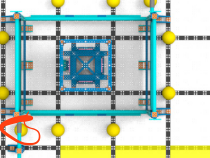 It means that when you get to the field, there may be a little bit of variance in precisely where the balls start compared to that image.

It does not mean that you can move the balls to whatever location you want within the 1” tolerance. You should not move any game elements before the match, that’s a referee’s job.

It does not mean that you can move the balls to whatever location you want within the 1” tolerance.

There is a Q&A about this:

With that being said, manually adjusting the Field to “push the limit” of this variance for strategic reasons is outside the intent of the rule. A G3-esque analogy would be for a Team to lower a Hanging Bar by 0.9" in order to make their Hanging mechanism work.

Head Referees should check Ball placement prior to the start of each Match, and re-position any that are in question into the correct starting locations.

Does this rule mean the ball circled below can be moved slightly either way?

There is also a Q&A that specifies the intended location of the ball:

In short - the two images are depicting the same setup, and Balls are intended to be placed directly underneath the Hanging Bar.

You should not move any game elements before the match; that’s a referee’s job.

I’m not sure why; I can’t find it in the rules.

You should not move any game elements before the match; that’s a referee’s job.

I’m not sure why; I can’t find it in the rules.

You’re right, I should have been more clear.

I didn’t mean that teams adjusting the position of balls before the match was explicitly prohibited, but at some point the last sentence in G16 starts to come into play.

<G16> Be prepared for minor field variance. Field tolerances may vary by as much as ±1” unless otherwise specified. Teams must design Robots accordingly.

If you are minutely adjusting the position/orientation/squish of a ball that is already in the right position, so that your robot has a greater chance of intaking it the way you want, that’s likely the sort of variance that your robot should be designed to deal with under G16.

Of course, there is a distinction between doing that and “helping with field reset”, which is always welcome and appreciated – if there are a bunch of balls in the wrong place, then I don’t think there’s anything wrong with a team helping get things set up correctly. But if things are already set up and you just want to adjust them slightly, then I think best practice is to ask a referee rather than just doing it.

Where the ball is placed under the bar has already been answered by the GDC:

I would expect the placement of the ball under the bar in the correct position will be a key emphasis of the field resetters at worlds since this has been in question and teams have kinda cheated the ball over a little bit to get it out all season. At the state competition in Indiana, they highlighted this to them and were telling kids they cannot adjust that ball after the judges had the field reset.

The rule is just saying that the feild will not be perficte every time and you need to ajust for that.

I’ve actually always been curious about the “otherwise specified” part. Does the field appendix count? 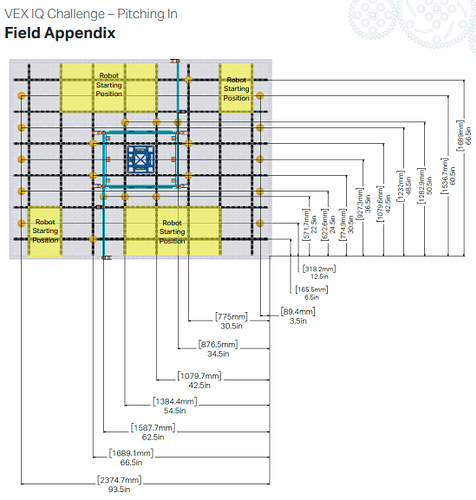 If so, then the balls should be placed very accurately, but if it accidently rolls a bit and it’s not caught before the match the kids will have to just deal with it.

If this isn’t what they mean, then what do they mean by “unless otherwise specified”? The including of the phrase calls for its use… Or I’m just overthinking!

However, I would not think that the kids should be placing the balls before the match to their advantage. All efforts, for everyone at the event, should be to set up the field as “possibly perfect.”