Hello,
I thought since we all have a lot of time on our hands we could share ideas and thoughts about drivetrains. The past three years, my team and I have struggled to make a good drivetrain. I was wondering if anyone had any tips for making a good base. You can post about any type of drivetrain you have built in the past. I mainly want to know things like, how you get rid of backlash on the wheels, are gears or chain better, what is the best motor number/placement, how reduce friction, how to get good speed and torque, etc. Also, I would like to hear what are some of your best designs are and what you did to overcome problems with your drivetrain. Thanks.

Overall, gears are better at reducing backlash than chain, but they create much more friction unless properly lubed and aligned.

In order to get the best speed/ torque, you have to figure out your game strategy first. An offensive robot would want a high speed drivetrain that could easily get them to crucial points faster. A more defensive robot could either want a fast drivetrain to block opponents or a higher torque drivetrain to push opponents. It’s all situational

In terms of how many motors you would want to use, just use as many as possible without sacrificing your scoring capabilities.

If you want to get as powerful a drivetrain as possible while still being able have power for other mechanisms, differentials can be incredibly useful.

Here is an experimental drivetrain I finished cadding today, its meant to run at either 240 or 250 rpm on 4" wheels 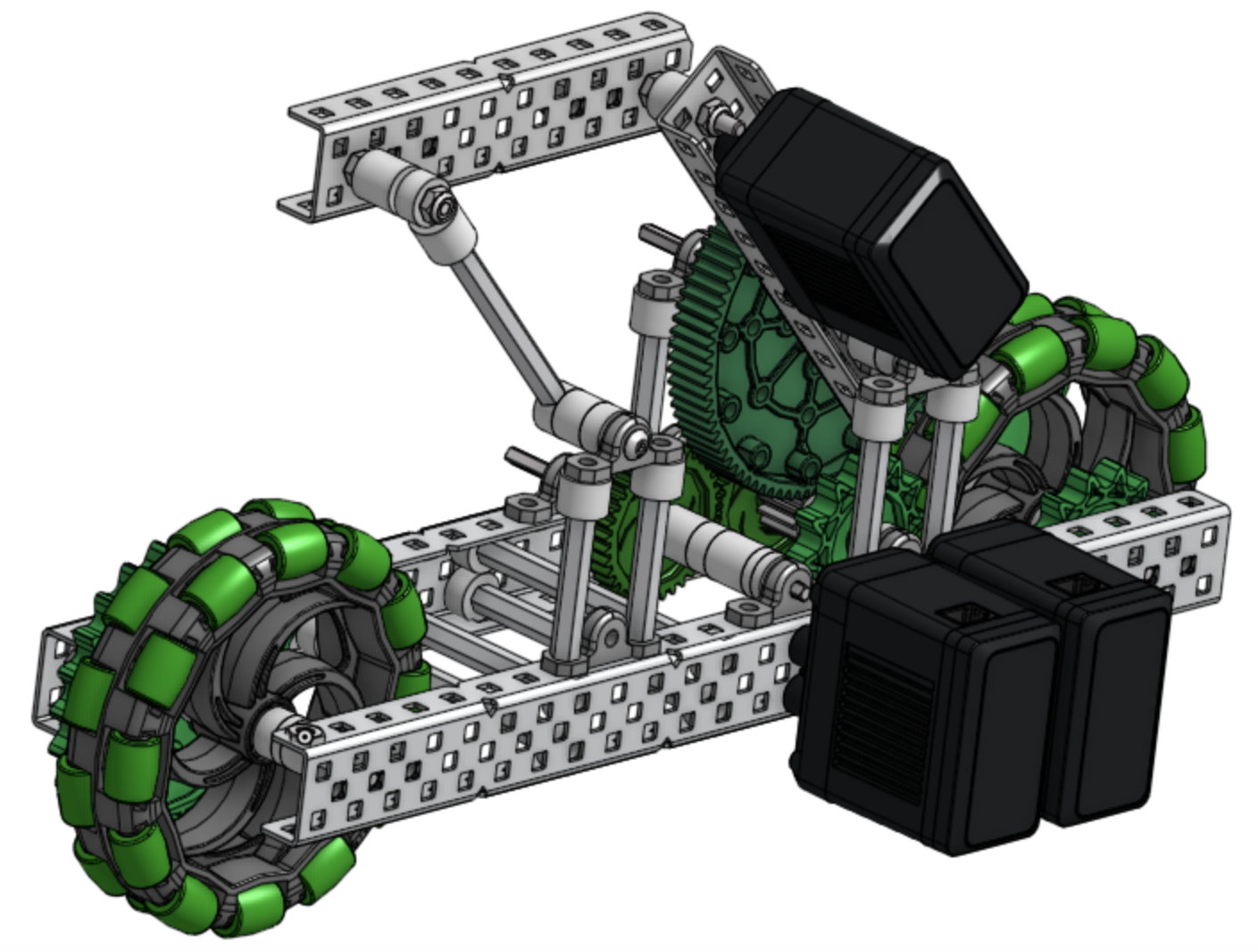 This is a very interesting design. Thanks!

What makes you say gears have more friction that chain?

If the meshing of the gears is slightly misaligned it can cause friction, normally there is very little relative to chain.

what is the best motor number/placement,

4 motor direct drives are probably going to be the best in general, with other drives being more niche or specific.

Another thing to consider is to link the wheels together so power can be distributed evenly. For example, if a drive were to have four motors directly connected to each wheel, and were to be pushed by an opponent the robot would likely tip a small amount, losing traction on two of the wheels. By linking the wheels together, the two wheels on the ground would still be able to utilise the power of a 4 motor drivetrain.

Always use 2 or 3(in rare cases when motors need to be oriented vertically instead of horizontally, mostly for 6+ motor drive setups) wide c-channel. 5 wide is heavier and bulkier, but serves no real added benefit.

Connect the sides of your drive train with crossbar c-channel, not standoffs. Standoffs and spacers can be used as well, but you want the distance between channels to line up with the holes of the cross brace, or your left drilling which gets jank.

Try to box your joints as much as possible, where you have a .5” and .375” spacer inside of the channel. Adds a ton of rigidity.

Direct drive is the most reliable type, no debating it. Simplicity is a beautiful thing.

Geared drives have less slop than chain, so they’re more accurate for auton. Chain is definitely easier to build tho, and the difference in slop wont be significant enough to be prohibitive for new teams. I’d suggest direct drive, with a chain connecting the two wheels for most new teams.

What would be the best approach for an omni-directional robot like H-drive, X-drive, or meccanum? During tower takeover I did build an X-drive, but it followed almost none of the suggestions you all listed.

H Drives are similar to conventional drives, build them like usual, except the wheel in the middle will be different.
Mecanum drives are exactly the same as normal drives, they just tend to be wider to fit the wheels in.
X drives pretty much throw all rules out the window, and shouldnt be attempted unless you’re and experienced builder.

I think that a mecanum wheel drive would probably be the best in most situations (the statistics and results from previous competitions speak for themselves). Mecanum wheel drives utilize the easy-to-build tank drive structure with the tradeoff of a SLIGHTLY slower drive train. In addition, since it’s similar to a tank drive, the placing of pos tracking wheels and other subsystems is extremely easy. The most notable positive about mecanum drive is the fact that it can strafe which can be really helpful for skills (in any game tbh). Check out some skills videos from any of the seasons including clean sweep, tower takeover, and starstruck. The only really big negatives about mecanum are the lack of precision when turning (which can be fixed with good position tracking ) and the fact that the drive train can be pushed around easily. If any of you guys have any other thoughts please let me know. I don’t want to blindly go into a season thinking mecanum drive is the best.

I’d say it depends largely on the driver at that point. Strafing is an awesome tool that we saw top notch drivers like 7k take full advantage of this year, but I’ve also seen it distract new drivers.

I’d prefer tank when you need the speed and strafing doesn’t add much, so games like nbn or itz. Tank drives can be super flexible to adapt to the shape of the robot. For instance, nbn bots generally had a rubber band roller front, so the drive was wider than it was long. Any time you don’t have a square drive to make room for a game piece manipulator, id say tank is better. Mech can handle off by a bit but programming gets harder, and turning really suffers.

Any tips on how to build omni-directional bases? Is there much of a difference between standard 4 wheel and omni bases building wise?

Do you mean a drivetrain with omni-directional wheels or a drivetrain that can move along any 2-dimensional axis? For the former, it is the exact same as a ‘standard’ base, though most teams use this design because the rollers on omni wheels allow for easier and faster turning. If you are referring to the latter, it depends on what design you want. There are 3 main ways to accomplish strafing for EDR, including the X drive, H drive, and Mecanum drive.

X drives have their wheels mounted at 45 degree angles from the center of the bot: 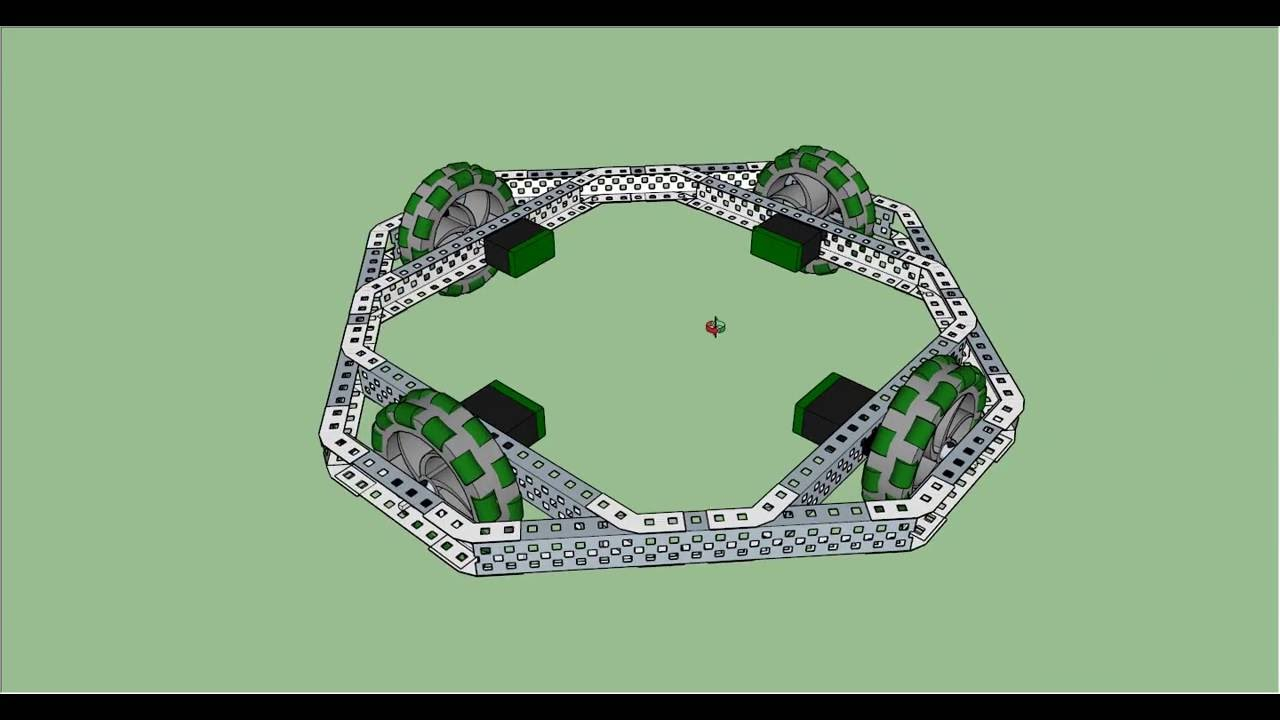 Because the wheels are oriented at 45 degree angles, every revolution of the wheels will move the robot 1.41 times as far as it would if they were all facing forward, but it also suffers from a 1.41 times loss of torque

H drives are normal omni wheel tank drives but with a 5th motor powering a wheel perpendicular to the front to allow for sideways motion: 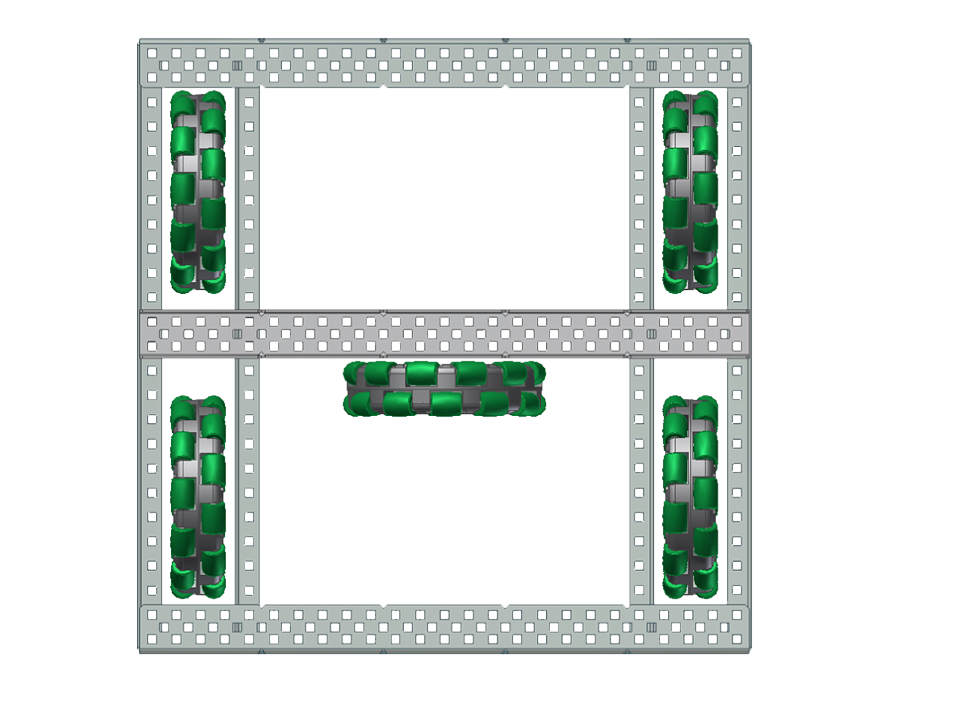 Mecanum drivetrains have 4 wheels all facing forward, but the wheels have rollers at 45 degree angles to allow for strafing: 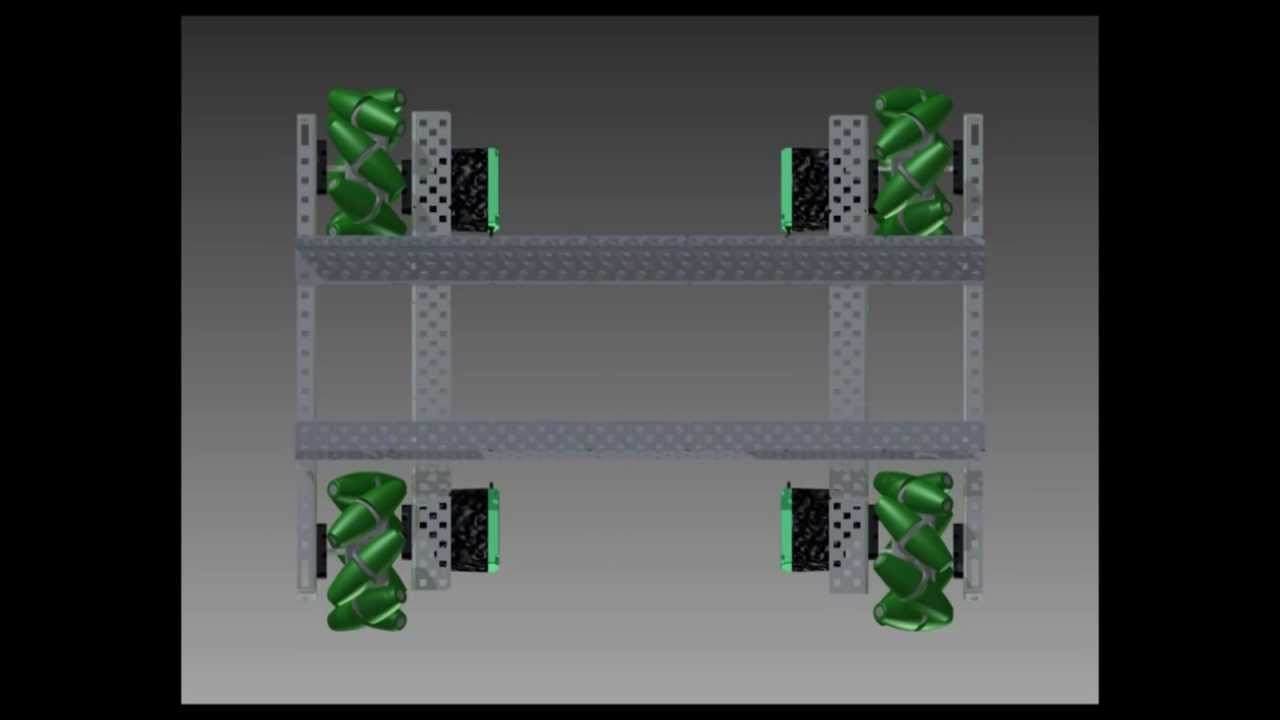 Note that the wheels need to be oriented such that the rollers all face away from each other on the outside and toward each other on the inside, making an X shape. If you have them backwards you will be able to turn without the motors powering the wheels and run into problems. To solve this you can simply flip the drivetrain over if you haven’t built anything else on it yet. To strafe, run the front and back wheels in opposite directions. Strafing is slower than driving forward with mecanums though. In our testing, we’ve found that when strafing, mecanums will travel only about .763 times as far as driving forward per revolution of the wheels.

There are also a couple other “weird” versions of holonomic drives including the kiwi drive, which is a three wheeled x drive, and a dragon drive, which is like a regular dive but with two of the wheels offset 45 degrees.

I have another question. What is the advantage of having a 4 wheel base vs a 6 wheel base? I know with 6 wheels you can lower the middle wheel and make it a drop point, but if you spread 4 motors along 6 wheels, does it give you an advantage like more torque?

Question about H Drive – how would you set up config and program in V5 Blocks? I’ve constructed my H Drive, but right now, my 5th wheel is not responding to my controller. Motor does run, shaft fully in, etc. I suspect my programming is set up wrong. Can you (or anyone else) help?

6 wheel bases should be used in game-specific instances. For example, in turning point where robots needed to stay on the center platform, you would use center traction wheels or omniwheels with screws inside to make the roller stationary. In addition, 6 wheel bases are good for climbing on top of platforms like during turning point. The downsides of using a 6 wheel base are that they center wheels might take up space that you can use for other sub systems such as pos tracking wheels or slightly affect turning. It honestly depends on the game but in most cases, a 4 wheel drive is better unless there is some sort of staying on a platform part. A 6 wheel base does NOT differ in torque but there might be a super slight speed difference because of the extra friction caused by the center wheels. The motors powering both types of drive trains are the same so torque does not increase. Correct me if I’m wrong.

Another advantage of a properly made drop center 6 wheel drive is that you could use all traction wheels and still be able to turn, provided that most of the robot’s weight is about over the center wheel. The use of all traction wheels would help to avoid being pushed by opponents.