Having decided to plan ahead and design this year, I’ve downloaded Autodesk Inventor 2016. I watched several of the tutorials on curriculum.vexrobotics.com, and realized I should use iMates. At first I thought that there were 4 iMates per square hole, and did this for several pieces. Looking at the tutorials again, I realized there were only 2 iMates per hole, but I couldn’t see where there were put. How many iMates should I put on a hole, and where? 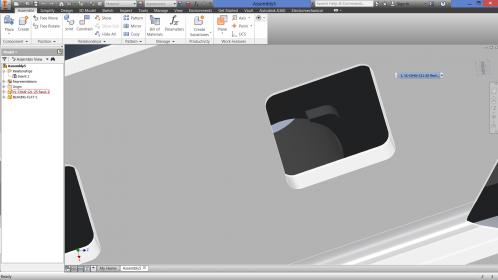 it looks like you have downloaded Jordans CAD library hopefully it was post 2012(?) which include iMates. iirc you hold down alt and drag one iMate to another and they will be bounded. it is honestly hard to see if you are mating the backside or the front to a piece. and your second problem could be caused by not mating the bearing and the metal correctly. i hardly use an insert constraint i would consider making a transparent circle inside the square and mating the circle of the bearing to the created circle and it should line up correctly. i think the 2012 has circles already included in the library. in my opinion i do the mating myself because it is more difficult to determine which iMates are to what hole and what side.

Sorry for the necro, but for anyone STILL facing this problem, it is because the insert that goes into the square hole is not exactly 90 degrees; you can measure this by using the measure tool and ctrl-clicking the 2 faces that are perpendicular to each other.

Some other part libraries may have it corrected.