Being pushed into the protected area

What would happen if my opponent pushes me into their protected zone?

You should do your best to get out of the zone. Rule g14 applies here.

I asked a similar questioned (Disqualifying teams, legally?) and I think you would be disqualified, and so would the team that pushed you in, unless it is “accidental,” or the other robot is “offensive” if which you will be DQed and the other team will be fine

as said above, rule g14 states that you cannot force an opponent into a penalty, and probably would not result in (in this case) the team being pushed into the protected zone being disqualified.

you would be disqualified, and so would the team that pushed you in

This is not actually possible. <G14> which provides a penalty for forcing an opponent into a penalty also exonerates the opponent from any usual punishment for that penalty. This protection is also irrespective of whether or not the team forcing the foul actually draws a DQ on themselves for it.

For example, if Red hit the side of Blue and pushed them into their protected goal, knocking over all of the cubes stacked in the Red goal, Blue would receive no punishment even if Red was not DQ’d.

Although G14 says that you can’t force a penalty, but the offensive robot gets the benefit of the doubt, G13. So if you get in the way of a robot trying to stack (be offensive), you will be DQed. This was similar to how in ITZ if you got pushed into the zone by a robot with a mobile goal you would be DQed and the other bot would be fine, because it was offensive.

Although G14 says that you can’t force a penalty, but the offensive robot gets the benefit of the doubt, G13. So if you get in the way of a robot trying to stack (be offensive), you will be DQed.

For the case of “push your opponent sideways into your cubes”, it’s pretty clearly a <G14> scenario.

Edit: to boot, nothing in <G13> affects the protection afforded to bots being forced into violation by <G14>, it simply affects what penalties might be applied by <G14> to the violating bots.

In ITZ season the head ref of Michigan said that if you get in the way of an offensive robot and are pushed into the zone you will be DQed. So I was a little confused, but your probably right.

Keep in mind though, generally if in the case you are the defensive bot getting pushed into the protected zone, the ref would generally not apply IF you do NOT make any effort to get out. If you are actively trying to avoid violating the rule and the opponent causes you to violate a rule, you will get the in your favor.

Leading on from this, if a robot is not in contact but have cornered the opposing robot into their own outer protected zone - would this count as pinning by being trapped within one tile with no avenue of escape? As the only avenue of escape would be to go into the inner protected - but this is illegal. 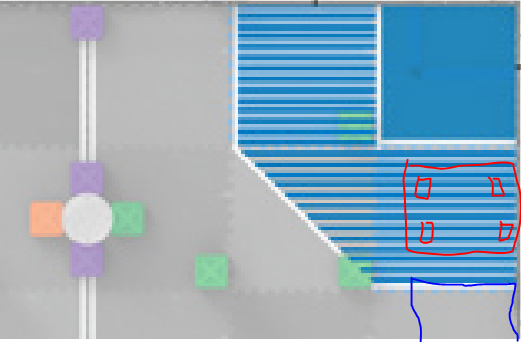 In this example the red robot cannot strafe and any attempts for them to move forwards is blocked by the blue. Would there be a pinning count? (sorry for the terrible image quality).

In past games yes this would be pinning. That being said your drive train would have to be rendered useless.

If your robot can rotate or running H drive I would say it is no longer pinning because you have an avenue of escape.

because it will cause them to violate SG3(A)

Still covered by <G14> as written.

Still covered by as written.

I think it’s a G13 scenario, since the intent of these protected zones was to reduce defensive interactions during matches, and give each alliance freedom to play the game. This is why the only thing a robot can do in the opposite outer protected zone is be in that zone.

The wording of <SG3> actually undermines the case you’re making a little bit:

Robots may not… perform the following actions: [table]

So even without <G14>, you could even just argue that your opponent forcing you deeper into the protected zones is not your robot performing any action.

Yes, <SG3> was made to restrict the legal types of defense and prohibit descoring. If the GDC wanted to write the rule “thou shall not inhibit a robot from entering its protected zone” they could have just written that rule.

Might be to much of an edge case but what would happen in this situation?

Yes I agree. I think also that the ref would have probably seen circumstances like this before and know not to DQ the team who got pushed. Now if someone intentionally went into the penalty area and then blamed it on the other team and said they pushed them that would be different and they should get a DQ.