So I have $80 left over in my budget after ordering the classroom bundle, which spare parts are the best to have on hand? I was thinking a couple spare batteries would be good so that I don’t have the “my battery’s dead” excuse flying around. Anything else? Smart motors?

The kids love the colored parts.

if you are thinking of making a big robot for competitions then i would either get i beams (black double sided connector) or batteries or 2 by 20 beams and i don’t know what the classroom bundle has but if not already owned get omni wheels.

At least a brain second battery. Our team can’t stop driving during a challenge so having a second one charging is a good thing. Especially if your design pushes things to the limit and only works on the top of the battery’s charge.

Motors, because if one dies or flakes out, your out of luck.

A brain for the same reason. We haven’t had one die but we’ve got a spare one between two teams just in case. I’ve read of some using a spare brain to help with troubleshooting and to reset a stubborn smart device on port 1. At the last challenge one team kept having motors say they were bumpers but not always the same motor and switching ports and port 1 reboots didn’t fix it. The brain firmware may have been the issue.

Any other smart device you rely on. Does your design need that gyro? Would your team be out of luck if in the middle of a challenge event it decided it was a bumper and you can’t get it to reset?

Aloha I3iggy,
Definitely I would invest in more Brain Batteries and chargers. We are currently running 4 teams. Each team has their own battery charger rack that charges 3 batteries and they have one battery in their robot. That gives 4 batteries per robot which in total is 16 batteries and 12 chargers. We also have a 6 bank charger and extra batteries for our practice. But in general, 4 batteries per robot is good. Here are some pictures of our battery charger bank. We made it using the VEX Sack Attack troughs from a few years ago. The 4 battery bank is perfect for our little ones to handle. Not too heavy in weight and it allows them to be responsible for their own batteries. Best of luck in your competitions. 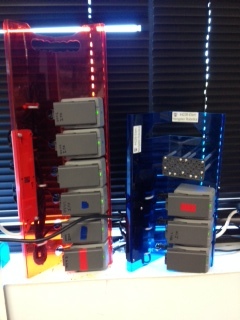 Not spare parts, but items to expand the possibilities.

You need to start saying “The second rule of VEX robots is always, always have batteries and controller on charge while you are building”. You’ll reach the point that you can go “Rule 2??” and they will scramble to charge battery packs.

Can I use Vex EDR gears in building Vex IQ robot? My Vex IQ gears wore out and I don’t have much time to order the spares and replace. Appreciate an official response. We don’t want to be disqualified at Vex IQ world at Kentucky for doing this.

The kit with the gears, where you can make a vertical lift (like a fork lift). Chain kit. Tank tread kit.

The 1st rule we teach is “don’t drive your robot on a table.”

Yep, first rule is “don’t drive your robot on a table”.

A few weeks ago I ran a contest around the Competition Upgrade kit. There was lots of good discussion there, you should check it out.