We built a free, useful, hands-free tool (located at team315.org/rankings) to assist in running VRC tournaments, meant to solve the following problems we noticed.

The rankings display we built:

N.B. this is a successor to: this tool. Also, if you change the screen size, please refresh the page to maintain an optimal viewing experience.

You can configure this tool on the configuration page. 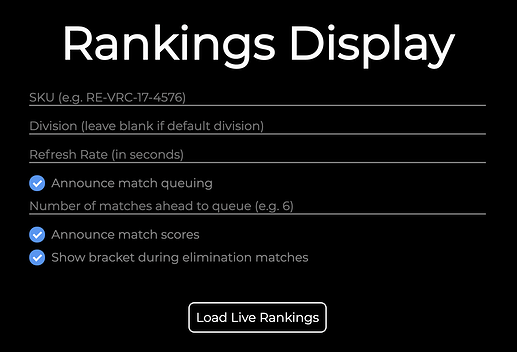 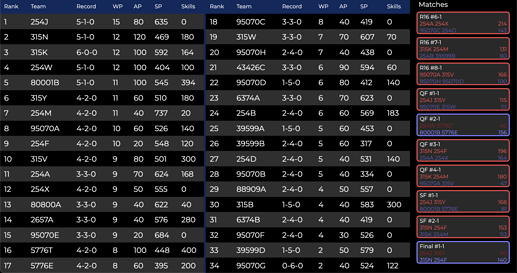 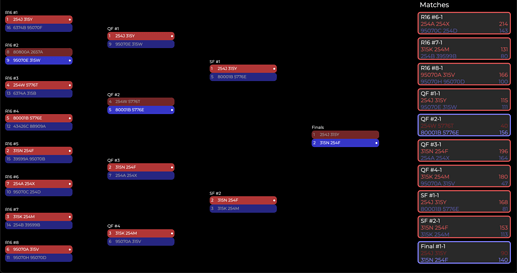 This tool is in beta until January 10th, so we expect to find a few lingering bugs until then. Please consider using this for your tournaments, and let us know what you think!

This looks really nice. How well would it work with iq? I run a few tournaments every year and something like this would be nice.

This looks fantastic! One bit of feedback to consider would be to report WP/AP/SP on a per-match basis, as I believe that is how the rankings are supposed to be sorted (especially during the qualifiers when teams likely will not have played the same number of matches).

Does this require the event publish to Robot Events, and for Robot Events to process them properly? I know there are some events that do not have Internet Access until after the event completes.

Just made some changes that allow it to work for IQ tournaments as well. It works the same way - by passing in the SKU of an IQ tournament. Here is an example: https://team315.org/rankings.html?sku=RE-VIQC-19-0356&refresh=500&queue=&announce_queueing=true&announce_scores=true

Hope you find it useful

. I’m not too familiar with what would be useful for IQ, but let me know if this seems about right. 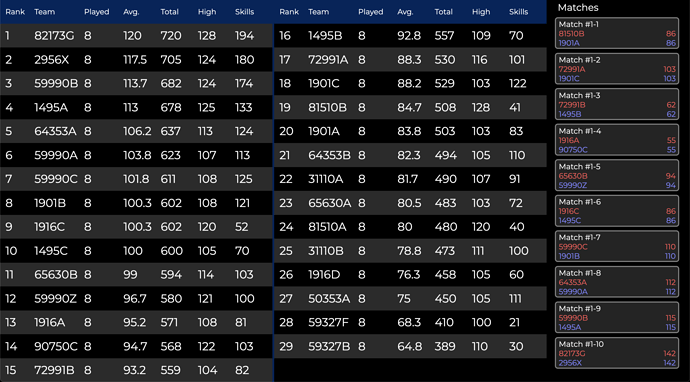 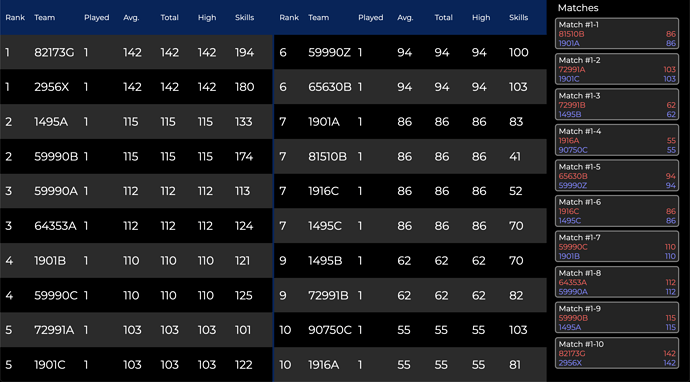 I have added an option to report the average WP/AP/SP instead of the totals. I’ve left the default as false on this though since this isn’t the official way VEX reports them on their rankings.

Yeah - this does require internet access during the event and live publishing to RobotEvents. I’d imagine/hope there probably aren’t too many tournaments unable to do this. The only other option would be to connect the computer displaying the rankings to the tournament server, which can be a nightmare (from experience). The idea here is to have a completely separate but still real-time display which doesn’t need any twiddling around to work

This look really cool! Including the skills scores is a nice touch.

Do you have a screenshot to show what “announcing” match scores and queued matches looks like?

This look really cool! Including the skills scores is a nice touch.

Do you have a screenshot to show what “announcing” match scores and queued matches looks like?

Thanks! Announcing is actually based on audio

(text to speech). You could plug this into a PA/broadcast system so that everyone could hear it. You can hear an example of scores being announced here:

That’s fantastic. Really nicely done. I like how the text resizes based on the number of teams. I think WPI was one of the larger events held this year in terms of number of teams, and the site handles it very nicely:

This display looks great, but I’m stuck. What exactly is an SKU?

An SKU is the unique ID for an event on RobotEvents, for example RE-VRC-21-4971

Thanks for the clarification!

I like the display a lot, it’s very nice layout and I like how it also shows skills.

It would be nice if it could talk to the TM server (maybe the web interface?) I connect for scores using my hotspot (getting onto the school networks is just a mess of hoops that are on fire and wrapped with red tape), so bandwidth is limited.

Thanks! Yeah, we considered trying to make this app talk to the TM server but since that would probably be very difficult, we decided to make this completely separate and based on RobotEvents. But the amount of data it sends/receives is actually very minimal so bandwidth shouldn’t be an issue. I tested this using a speed equivalent “slow 3G” and it still worked just fine.

Something I noticed when trying to use this today was an issue with the zoom. On Chrome or Edge if I’m at 100% zoom on my laptop or another device I couldn’t see the Load Live Rankings screen