No, but most would work as long as they are somewhat recent, and here is a spec sheet from Autodesk inventor which if you can meet these you should be fine.

Can the on shape files be shared with fusion 360 teams?

Thank you! This will help me a lot!
Although it’s like I’m reading another language. I’ll try to interpret it the best I can.
Thanks again!

Well, sort of. Onshape can import nearly every file format. Exporting to another system, you’ll need to use a “universal format” like .step or a parasolid (this will work between ANY commercial CAD software). The problem is that CAD models become complex assemblies of mating parts, so there are many files and complex interrelations to deal with that don’t always translate. So it’s better for everyone on the team to be using the same software.

I’ll change the cad next season if I can.
Thanks for the alyernatives!

If you’re using Fusion 360, you should be able to use the Fusion spec sheets here:

This article provides the system requirements for Autodesk® Fusion 360.

Note that these are a lot lower than the Inventor specs, and most of them look like your computer would be fine (the only potential issue would be the graphics).

Also, Autodesk has an article about how to optimize performance of Fusion:

Slow performance when working in any workspace in Fusion 360 | Search |...

How to improve performance in Fusion 360 when it is operating sluggishly.

Try some of the suggestions there, and if that doesn’t work, you can get a newer computer.

any refurbished Thinkpad’s are amazing

most would work as long as they are somewhat recent

Just to be clear, Lenovo has released a fair share of garbage low-end devices under the ThinkPad name that won’t get you any success in CAD modeling.

@Railgunawesome In general though, you should be fine if you get a ThinkPad with a Core i5 or i7 processor and 8 GB (or more) of RAM. Just be aware, though, that some sellers will not include RAM, a hard drive (or even the drive mounting hardware), a power supply, and/or an operating system. So make sure to look out for those things when buying — all of those can be easily installed, but you may want to buy the device ready to use if you are not comfortable doing so.

PSA about the operating system:
I strongly recommend you completely disregard any pre-installed operating system that may be included. You simply cannot trust it to be genuine and legitimate, let alone free of malware. Instead, just (re)install Windows yourself — all you need is an 8 GB or larger flash drive and Microsoft’s media creation tool. You can read more about this process on other websites (search “how to install Windows 10”). Also expect to buy a Windows product key, either on eBay for a few dollars or retail for over $100 (yes, the keys on eBay are generally legitimate).

Try and find ram sticks from broken computers. Is your system 32 bit?

When reinstalling Windows, can’t you use the exact same product key that shipped with your laptop initially? That would save quite a bit of effort and potentially also quite a bit of money.

I’m not as worried about the pre-installed OS personally, I’m pretty sure Lenovo and others have learned from their mistakes and aren’t shipping any sketchy software. Microsoft already ships Windows with lots of junk in it (why does every new installation have Candy Crush already in the start menu?) so it’s a bit of a lost cause. Reinstalling Windows would also wipe out any drivers installed by the manufacturer, which could lead to a lot of troubleshooting down the road.

Remember that we’re talking about used/refurbished hardware here. A preinstalled OS from Lenovo or Dell is probably fine, but I would never trust anything installed by some random refurbisher/eBay seller.

Reusing the product key that shipped with the laptop requires literally no effort when reinstalling Windows on pretty much any new, modern computer. But the answer isn’t a simple ‘yes’ or ‘no’ when working with used/refurbished hardware — there are a lot more variables to consider. What you can do, though, is wait and see if Windows automatically activates itself or not before buying a product key, especially since digital delivery of product keys means you can get a key within hours of purchasing it.

Also, most mainstream laptops these days really don’t need any drivers to be manually installed by the user. Windows Update will take care of most everything that doesn’t already have drivers built-in to Windows. The only notable exception is dedicated graphics cards, but that doesn’t matter here. Pretty much any semi-modern T- or X-series ThinkPad will not require user intervention to install drivers.

Well, reviving an old thread, out of interest I checked my system specs and turns out I was grossly wrong ab ok ut the RAM.
These are the actual system specs. 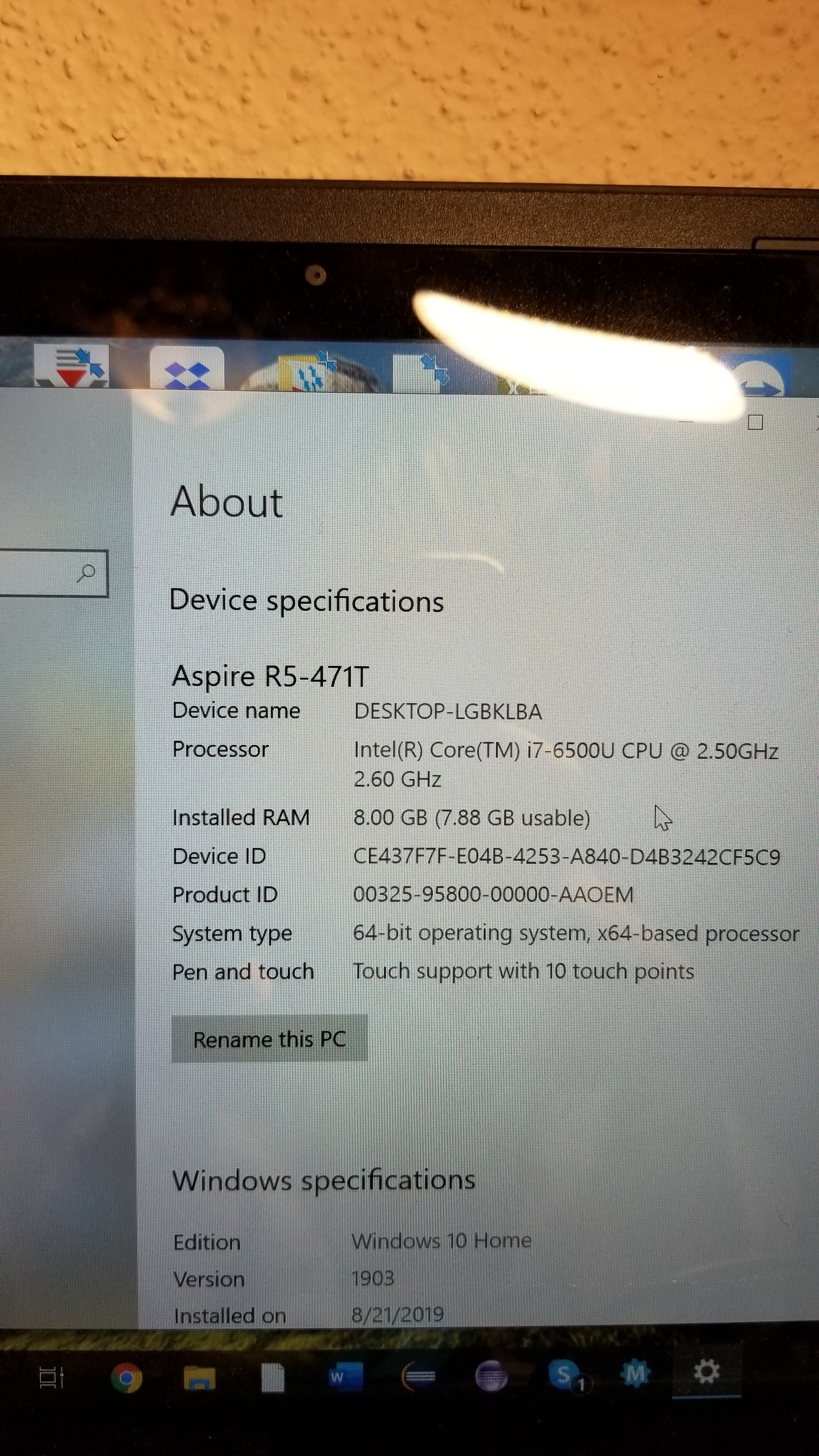 I’m still confused as to why my CAD is wonky though, it seems to meet the requirements yall laid out.

Assuming you don’t have lots of junk running in the background (e.g. unwanted Windows Update), then I can almost guarantee you that your processor is the problem.

The i7-6500U is grossly underwhelming and really a sad excuse for an i7.
Source: Intel ARK and I have personally extensively used the marginally better 6600U

Few points:
-The RAM in that specific laptop is NOT upgradable.
-As Barin mentioned, the i7-6500U is actually pretty bad, the computers in our room are equipped with i5-750s (45nm era) and even they have better multi-core performance (Source: UserBenchmark).
-I’ve never used Fusion 360, but I was under the impression that CAD-ing programs are generally more CPU heavy than GPU heavy.

For $600 you can get a refurb 8th gen i5 with a 1050TI which should be more than enough for most CAD assemblies. I want to refrain from making any recommendations, but Dell has some refurbished G5 8870s for around $600, just be advised that they are heavy at 5.76lbs (still lighter than an external GPU.

I stand by the recommendation from earlier in the thread to just get a second-hand ThinkPad. For under $200, a much better CPU and consequently much better CAD experience can be had.

Gotta give +1 to Lenovo ThinkPads I use one at work in a metal foundry doing industrial programming, it has seen a lot of abuse still standing strong.

Side note my love for ThinkPad came from my high school making us buy them, my vex team had them, and both technical college and university used Lenovo ThinkPads. They are a true workstation laptop.

On my laptop I use an i7 2620m and it works fine just a little slow, there is no graphics card.

Another vote for think pads from me, I use an x230, and it still works beautifully.

Gotta give +1 to Lenovo ThinkPads I use one at work in a metal foundry doing industrial programming, it has seen a lot of abuse still standing strong.

Side note my love for ThinkPad came from my high school making us buy them, my vex team had them, and both technical college and university used Lenovo ThinkPads. They are a true workstation laptop.

I have to agree. I use a Lenovo Thinkpad P1 (that is massively overpowered) for SolidWorks simulations in college in addition to all the other software I run regularly. I wouldn’t recommend someone to get a Thinkpad P1 just for VEX Robotics, because of it’s price, but I would look into getting an older or cheaper ThinkPad, as they truly are reliable workhorses, and have the best keyboards of any laptop.

What cad programs does blender work with?