For those not in California, this probably doesn’t affect you, but for the pre-COVID numbers of 1000+ VRC (800+ VIQC) teams who are, they might find it interesting that California (previously split up into two regions) is now four regions.

Even more interesting though is there the dividing lines for these regions are. Here’s the approximate region lines: 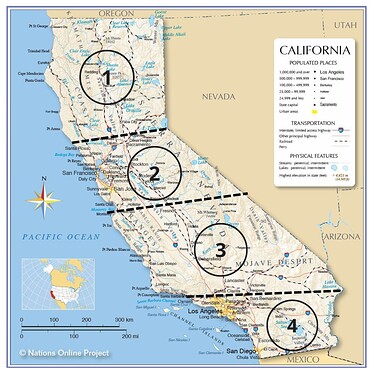 The data below is from TiP:

It appears that the regions were chosen more off of acreage than number of teams and events.

So what do we think? Was this a good change? Should the regions have been divided differently?

This is a question for your RECF representative.

Texas also has 4 regions, which are divided by zip code. Not sure if the CA regions will follow that model, but you might make a guess based on @FRC973 's map and a zip code map.

Based on the numbers, it seems like all 3 dividing lines could move south and make more even regions.

I want to emphasize something in the hidden text of the OP. You can only qualify to your regional championship at events held in your region. Just like you cannot advance to a California regional by winning an event in Nevada. That said, your skills scores at any event will be considered if there are wait-list spots at your regional.

The map was sent to EPs as an approximation as far as I know. I’m not sure that there is a map out yet with the exact lines, but you might try the zip code lines like DougMoyers suggested to try and guess.

That’s fewer teams in the entire region than a standard local event in Arizona, you can’t even have a full elims bracket with that few teams.

there’s a particular reason they go for this

Perhaps based on where their many state championships are held? 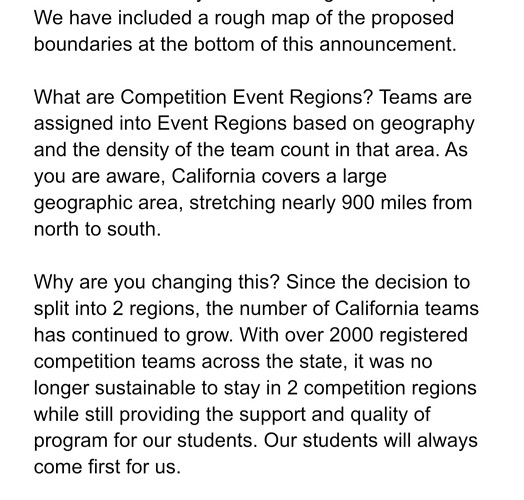 it was probably an attempt to reduce the strain of teams in the sparsely populated areas who had to drive quite far for their states events.

But it has the unfortunate side effect that it creates 2 very large and 2 very tiny regions, and it will be much more difficult for teams in these smaller regions to get to worlds now because their region will now have so few spots.

But it has the unfortunate side effect that it creates 2 very large and 2 very tiny regions, and it will be much more difficult for teams in these smaller regions to get to worlds now because their region will now have so few spots.

Plus the teams in the north will be likely going to just a few very small events with mostly the same teams, which isn’t great for pushing them to new levels. Unless they drive to the other regions for events, which makes the whole “don’t have to drive as far” thing kind of pointless.

I dunno, I’m sure there’s a good reason they couldn’t make a 3 region map work, but I would not wanna be in region 1.

Unless they drive to the other regions for events, which makes the whole “don’t have to drive as far” thing kind of pointless.

not to mention no region 1 teams would even be able to qualify to anything through these other events. It would solely be just so they can compete in events that they otherwise wouldn’t have been able to.

Personally, I didn’t see anything wrong with the 2 region map we used last season, but this is from someone who had a ton of tournaments nearby (even if they all did fill up within a few minutes of registration opening), so maybe I’m missing some benefit that a region 1 or 3 team might see from this change.

not to mention no region 1 teams would even be able to qualify to anything through these other events. It would solely be just so they can compete in events that they otherwise wouldn’t have been able to.

Eh, I’d imagine that it’s just gonna be “everybody qualifies for the regional champs” in that region, so that doesn’t matter much. Of course, then you have the problem of mid level teams having no real attainable goal or sense of accomplishment. Everybody goes to regional champs, and there are virtually no worlds spots to shoot for.

Ventura seems to be right on the line, can anyone tell which region would it be in? edit: hoping it’s in 3, that would be a lot easier to compete in

Check this map; it designates regions by zip code instead of by a strict linear boundary.

I’ve been following this situation for a while, even before it was made official. It’s not the worst change, but I do fear for region 1 if they’re unable to get enough teams registered. Because of the new split, I would reckon that region 1 is given 3 worlds spots based on how spots have been allocated to regions of a similar size to region 1. California - North had 19 spots last year, with 2 of them being awarded to teams who are now in region 1, so I don’t think it’s unlikely to see 3 spots there.

Even though there were only 4 events in region 1 last season, I do think that the issue is not in the amount of events but simply the amount of teams they can get registered. Our RSM will likely ensure that region 1 has enough events, because before, EP’s up north did not have any pressure to hold tournaments because there were already tournaments in the Bay Area (now region 2). With their region being isolated, EP’s are probably going to have more pressure, but more opportunities as well, to host tournaments.

One thing I will say about the change is that I am curious as to why California - Region 2 is only going to have one championship according to the initial emails sent out about the change. This means that there will have to be around 60 - 70 teams crammed into one venue in order to match the amount of teams that qualified for the regional championship last year, a year in which we had three championships. I predict the regional championship would be held in Milpitas at the India Community Center, which is the same venue that the Silicon Valley regional championship was held at last year and the same venue being used for the NorCal Signature Event (which means it should be able to hold up to 80 teams). I’d be bummed to find out that Silicon Valley is the only site for regionals, as it means the Sacramento site would be deprecated despite it having a long standing history as a California State Championship site.

Looks very similar to how the Texas division is currently. Like Texas, the two largest geographic regions have the smallest numbers of teams and events. The competitive teams in Texas still travel the state to find competitive events throughout the season. There are many more spots given to Texas Region 2 (Dallas/Fort Worth) and Region 3 (Houston) than to Region 1 (El Paso) or Region 4 (Austin/San Antonio). One region is significantly smaller than the rest in both number of teams and events (Region 1 - El Paso) . Note that because of the large number of spots last year to Worlds from Region 2 (Dallas/Fort Worth) teams were drawn at random in to two tournaments on the same day/time/place where the tournament champions faced off in a Bo3 “Bragging Rights” final at the end of the day.

The map is interactive and you can see which zipcodes belong to which region by hovering your cursor over California.

Sorry for reviving the topic, but now that most events are finalized and not many (if any) are being added, I wanted to recap this. Here’s the data for this season:

Events so far this season:

Teams so far this season:

To me, the “we hope there will be enough events” from VEX seems like there is too much being left to chance.

There will never be “enough events” in a region with <20 teams.

It seems more than likely that someone not familiar with the population of California made the decision of how and where to split the state.

This doesn’t make sense to me though, as it only takes a single Google search to find this information.

I am not sure of the logic behind this decision, and I would very much like to know.

What I do know though is that it is very rough for California teams, especially in Regions 1 and 3. As a part of Region 3, my organization is running 2 of the 4 tournaments available this season as well as the state championship.

VEX’s “I hope so” seems somewhat careless given that this determines the season for well over 100 VEX teams, and affects the 700+ teams in California.

My end note with this is that I would like to ask VEX to please reconsider this decision for next year.

15 teams in region 1 seems ridiculous. I understand the reason this was done but in my mind something that sounds more optimal would be making it a 3 region area instead of 4, however idk how that would be split.

if you compare spots allocated to teams registered, you get ratios of:

This means that region 1 has about 3.3 times as many spots per capita as region 4.

Whatever metric is used to divvy out spots, I think it can be confidently said that it is not exactly proportional to team count. This change, along with overall reduced spot quantities compared to last year, as well as the change that makes double qualification spots only consider the skills leaderboard at a regions state championship means that it is significantly harder for a team in California region 2 or 4 to qualify for worlds. I’m of the personal opinion that this change is harmful for everyone in California, and I doubt if this benefits anyone. Sure, 3 of the region 1 teams will have an extremely easy time qualifying for worlds, but what fun is playing with just 15 teams around you at only 2 events when there is a huge region of 200+ teams a two dozens events right below you?