Can a flywheel work?

Can you make a flywheel shooter, shoot a star

You can, but you shouldn’t.

I believe it could, but not a single flywheel, I think the double flywheel could be promising. It wouldn’t be accurate, but it could be used as a very fast intake, and when combined with an arm it could possibly launch into the far zone. I’d say its worth prototyping with two links that operate independently, each with two motors and a wheel. They could be held together using rubberbands, and the chains used to gear it up could be also used to feed the wheels. 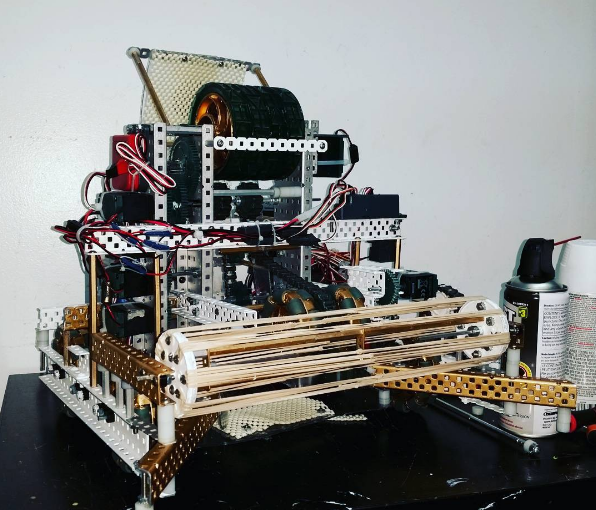 If you use conveyor belts for contact instead of wheels, it might work if the belts are wide enough. Just a thought.

The very concave shape of the star makes it much more difficult to use a flywheel on than on a NBN ball. You might have better luck with a cube, but I don’t think a flywheel will be feasible at all this year.

For sure, you definitely could.

It’s ingenious as far as it goes for launching.

Getting a star to properly mount into/onto the fly wheel is where things become difficult.

That robot is nooice… especially the 4" wheels for the flywheel…;D

If only you had that last year.

If only you had that last year.

I don’t think you would have better luck with a cube, even with a double flywheel. Even if the cube weighed the same as the star, I don’t think you’d be able to get even an acceptable amount of traction with the cloth lining of the cube, while the hard rubber that the star is made out of is much more compatible with a flywheel.

I think a flywheel at 2000 rpm would make a fine star shredder.

I haven’t tried it yet, but I think a wide, single flywheel-esque contraption combined with a dumper robot might actually be pretty effective. The wheel would be on the top edge of the dumper bucket and give the objects a little push as they roll off, hopefully propelling them into the far zone.

You could but what would be an advantage of a flywheel, and why???

what is wrong with a double flywheel loncher?

what is wrong with a double flywheel loncher?

Quite awkward to use on a star.

I built one that throws a star on average 5 to 6 feet.
They are hard to feed but I don’t really know how to buled a catapult.

This is simler to what I am building, https://www.youtube.com/watch?v=SfGmtw3ao3U.