I’m a lot of you have seen this reveal here for 7258 but here’s the link: https://youtu.be/nVnoWXHzSAY

I’m wondering why it still seems like 4 bars are dominant in the meta. There are plenty of pros and cons for each design, so let’s hear them.

Chains can break so the standard four bar tends to be more reliable.

The advantage of a chain bar is that it gives a wider range of motion. A four bar may have 40 to 60 degrees of range where a chain bar can move 270 degrees.

Chain bars were prevalent in In The Zone where they could grab a cone on one side of the robot and swing it to the other side while keeping it level.

The reason the chains breaking isn’t an issue for this design is the fact that the weight of the goal is balanced. The center of mass of the goal is centered around the point of rotation of the chain. This means there is very little force applied to the chain.

And the reason the chain bar is an advantage in tipping point is that it can use its range of motion to go up and back to rest on top of the robot. This means the goal can stay up while grabbing rings without making the robot tippy or applying constant motor power to keep the lift elevated. This means it can park on the platform taking up minimal space so their partner can stack two more goals around it.

I do like the advantages the chain bar has, and it does seem to have the potential to be better than a 4 bar. I think what might really make it powerful would be if there was some way to let go of the goal on the top of the robot, and then go back down to grab another, increasing the goal capacity.

But I don’t think that they’ll replace n-bar types of lifts for carrying goals, not because they’re not good enough to, but because people have been using 4 or 6 bars to lift the goals since day 1 and I don’t think that’s going to change. But I do think a few teams probably will make the switch, and have a lot of success doing so.

It does seem possible to hold a goal on top if you make some sort of pneumatic holder on top of the robot. That might make the robot tippy but we’ll just have to see if someone tries it.

I’ll be building a second robot with a chain bar to try it out. I don’t plan on making the holder on top though. Hopefully nobody on Northern New York is reading this. 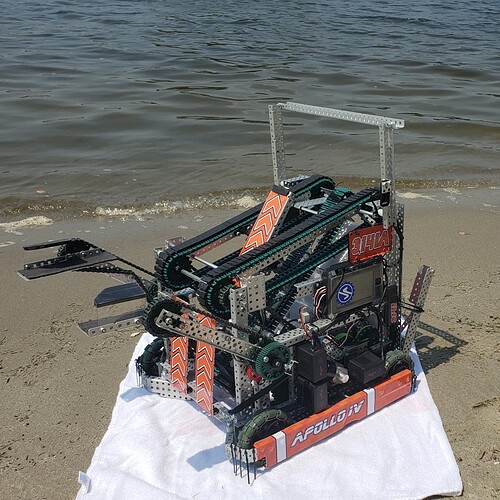 That’s an interesting robot. Can it stack rings?

It can score rings on alliance mogos.

13800A is a good example of a successful chain bar offloader. They can also use it to hold a mogo on the top of their robot, and although they cannot leave it there, they can balance with 3 mogos which if done right means they don’t need to offload.

The issue with a 3 goal capacity is that it means you actually have to beat the other teams to all 3 goals. If you’re in a competitive match your capacity will be useless and just slow you down with the clunky mechanism. I don’t know if it’s too viable.

That’s true, but they have already demonstrated that at their last tournament, beating out their sister team (a pretty competent high goal bot) to the mid goal race to win the whole event.

I suspect that other teams will come up with mechanisms to grab multiple goals in auton like 13800A already has. I bet it won’t be too long until other teams start developing counter mechanisms too.

Chain just isn’t reliable enough to make it worth it for most teams, if the chain gets hit, then its gonna snap and if the mogo clamp gets hit, the chain will snap due to the backlash. And to your point about how they won’t break cause no force it applied to the chain. This makes no sense because the chain is literally acting as a 2nd bar so it is always under a load. You will also never perfectly center your goal and the claw at the point of rotation.

My argument makes perfect sense. The only thing the chain is doing is rotating the goal so it is always the same orientation. If the mass of the goal is centered, this force is insignificant. The chain is not lifting anything, it is only staying parallel.

What @Alpha_Goats_53999F is saying is true.
My team opted for a chain bar lift this year, and we went through how it works in our notebook. The pressure on the chain is minimal, and really only apparent when you put in a bunch of tensioners. Otherwise, the driving sprocket is rotating, and if built correctly, the bar is simply staying parallel, and the angle is increasing in a linear fashion.
I’ve found this to be extremely helpful when you need to lift a goal a certain amount, specifically for the platform. You can simply tell your driving motor(motors, in my case) to turn X amount of degrees, and it will rise to a certain amount.
I know this is stating the obvious, but stay with me.
When you do this with a chain bar, because of the physical chain links running on the sprocket, you can do math to figure out a) how many links go by in a certain amount of degrees, b) how far a degree travels upwards, which both contribute to easier coding in auton, because if you know precisely how much farther you need to go, then you can save valuable testing time for other stuff that needs to get done.
Of course, I’m not a builder, I’m a coder, so I have a drastically different outlook than someone who is actually building the mechanism, as I only code it.

This is simply untrue. A fourbar can have full 360 degree rotation at any one of the joints (depending on the linkage design).

The advantage of a chain bar is that it gives a wider range of motion.

Unfortunately this is incorrect as well. I don’t think most people in vex are aware of how many motion profiles you can create with a four bar. Here is an example of a Solidworks motion study of a non-parallel grashof fourbar I made last semester. (The associated graph is of the torque vs time, and while the graph isn’t particularly relevant, it was the only vid I have atm)

Four bars are exceptionally versatile, one just needs to know how to design them properly. I recommend the instantaneous center joint generation strategy. Here is a helpful video demonstrating the technique: This technique allows you to design four bars such that you can decide two orientations (both position and angle) that the coupler link is at at two arbitrary crank angles.

There may be techniques to do the same with chain bars, but if there are Im not familiar with them.

Another neat thing about four bars is that you can design precisely what torque the mechanism has at a given angle.

What @Hudsonville_Robotics was attempting to say is that a 4 bar has around 40 to 60 degrees of rotation while keeping the end bar perpendicular to the ground. I do know it is still possible to get greater rotation, it is often impractical and even less stable than a chain bar, which is much more convenient for most designs. Also as mentioned, a chain bar can have full 360-degree movement, which a 4 bar can never have.

Also as mentioned, a chain bar can have full 360-degree movement, which a 4 bar can never have.

A fourbar absolutely can have 360 degree movement- it’s possible at both at the crank and the coupler, so I’m not sure what you mean here.

A parallel fourbar can most certainly be grashof. It can rotate a full 360 degrees.

How is it possible to get a full 360 out of a 4 bar while staying parallel to the ground? If you have a photo of one doing it, please share it here.

The grashof condition is defined as S + L ≤ P + Q. S and L are the shortest and longest linked respectively. If all 4 links are equal, the condition is satisfied, and the fourbar is grashof.

If a fourbar is grashof it means that it can rotate fully about the shortest link with respect to the neighboring link.

Yes, the grashof equation works in a 2d environment where surfaces can overlap and never hit each other. When this 4 bar would spin, bars of the 4 bar would hit the joints between them. Unless you can show me otherwise, I do not think it is possible to make such a 4 bar in the real world without overlap or intersection.