Hi, Billy here from 50239A, the “blue ballers.” I’ve worked with a few others since the game release to figure out optimal auton strats, and we’ve figured out the ideal route for a single robot.

Starting on the far side of this image on the blue side, the first move would be to pick up your preload, the ball in next to the goal, and the lower blue ball in the goal. Then rush the central goal, and drop all three balls in it. From what we can tell it is physically impossible to descore the central tower, as the 4 posts revent a ball from being pushed out the bottom. In addition, if you control the central tower you control most of the field, blue balling the other team.

The main downside to this strat is that you potentially sacrifice the auton, as you cant get the six points from your home row. However, the benefit of controlling the central tower far outweigh this, so long as you have the scoring capacity necessary to capitalize.

Time permitting, you could also take the blue ballon the other side of the central tower (marked ‘2’), and place it in the far middle tower (marked ‘3’), while descoring the lowest red ball. This would mean that while you sacrifice your home row in auton, you make up for it with the middle row, meaning that you would most likely win autuon. However, this is most likely only possible if you are allied with another robot with a complimenting auton, as without very carful optimization I feel that the time does not allow for this specific strat. Thank you to Andrew from 977Z, and 5150 for working with me for this auton.

Your ideas still stand though. Maybe you score one of the home rows, and then do the center goal. Just like tic-tac-toe, the center will probably be important.

yeah looks like you’re right about the ball. However, the central tower is still the most important, and Starting off with control of it still seems very powerful, as it’s much easier to retain control then it is to take it back.

Why is the central tower the most important?

Because in tic tac toe the center is the most important (most ways to create a row)
Edit: for clarification this game is literally a more complex game of tic tac toe with teams trying to get the most 3 in a rows

This works especially well in playoffs, where WP doesnt matter as much (and in theory you’ll have a much more consistent alliance too). There are definitely some drawbacks to this strat, but I also think that WP isn’t everything, and teams generally arent picked by just rankings, rather actual match performance and auton.

That WP will help put your team in the picking position. Being higher in the rankings is always good. Personally, I will probably make 2 autons, one that can do the entire home row and one that does something different. This is so I can get that WP even if my partners don’t have an auto. 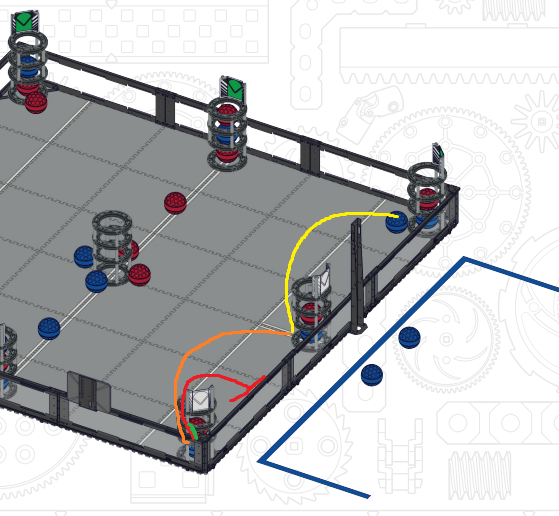 The red being where you start, with your first motion to go for those two blue balls, this would give you three balls.
The Green shows you would then place one ball in the tower.
Next following the Orange line to the middle tower and scoring that.
Finally the yellow line were you would score that tower.
With the two blue balls being gone from the right side as your partner already took them.
This would allow for 12 points from having two rows, and scoring 9 balls. This would give you a 21 point auton(might be off, not good at scoring this game yet). These combined would almost guarantee an auton bonus and a WP. As the WP is taken care of by one robot, this would only mean you need to create two autons.

I think when looking at autonomous strategies, one of the most important factors is going to be the Home Row. Not only for the points given by a row, but more importantly the extra Win Point that can be earned. This extra WP would give your team a definite edge over other teams during qualifications, but won’t exactly be important in the tournament.

while this may be true, everyone will think that. i feel like it would be easier if you were to just go for the wall goals.

it is required for four rows thus 24 pts can be stopped or not stopped from that tower. To have the center so half the rows can be denied from a single goal make that quite important and arguably the tower is most impotent in the end game. However the point of them being distracted by the center makes this a little more complicated

I think that the home row win point is one of the most things because it can help you a ton in rankings.

One thing ive considered about the extra win point is that it will boost your stats, but what will other teams think about it. I see the possibility of teams viewing win points from autonomous home rows as less valuable than win points from winning a match, and won’t really represent elimination competitiveness well. I personally could easily see myself going down the list simply looking for the most match wins and discounting the win point system.

Win points are only as valuable as other teams credit them to be, and the autonomous win points have a chance of devaluing them. In short it might only change who gets to pick, but not who gets picked.

Edit: I would respond but I feel as if it could easily derail the thread

I’m under the impression that the home row WP has been made to help against bad schedules, so even with a terrible schedule, you are able to rank higher that if the win point system wasn’t implemented. Personally, I think picking primarily off of the WP is terrible, and you should really scout out the teams yourself, especially with local competitions in which you’ll really be playing the same teams, and should be able to more accurately gauge their ability.

I do agree with you, it’s more about who gets to pick, but you should really reconsider devaluing the home row WP, if a team can consistently get that, it indicates a consistent, good auton. of course you should make an auton based around the elims, but I dont think this really devalues WP at all.

I totally agree with you that winning Auton is more important than the win point and that just means that you should be more flexible with your autos. And if your partner had no auton would you go for the win point or winning auton?