I was reading a post that I cannot find anymore (sorry), but it was on a wallbot that would use braided nylon rope that was stretched between 2 little mini bots. That got me thinking, and since wallbots will most likely be fairly common this year, I thought, could you make a robot that drops behind a large bar or something that blocks people from descoring the home row? here is a picture: 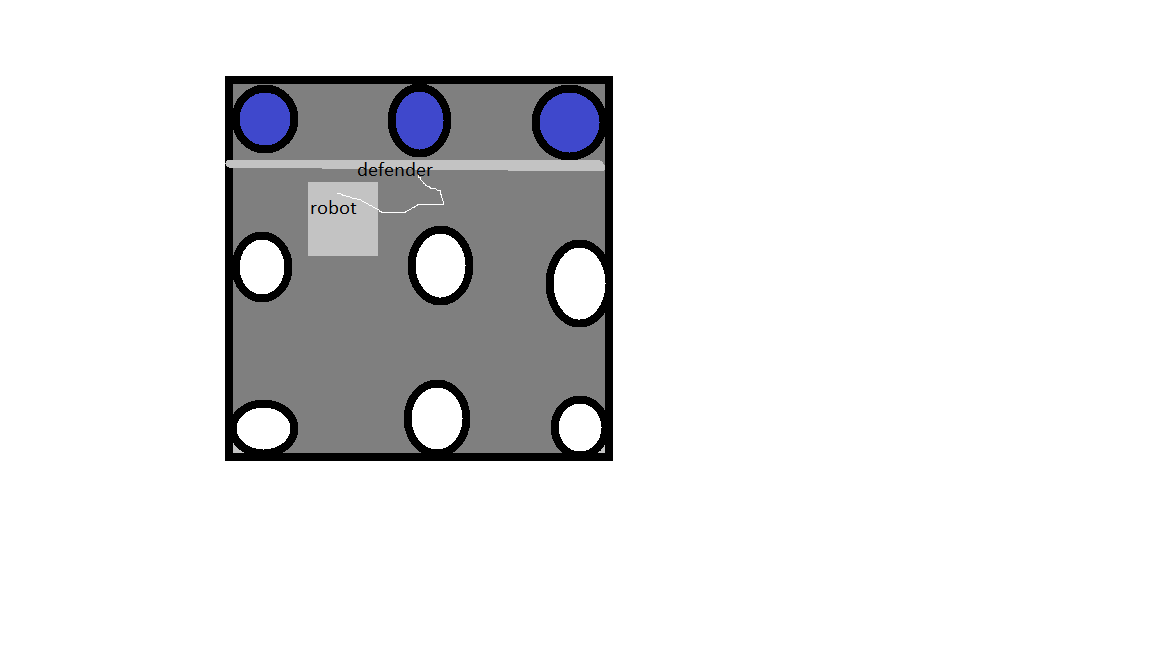 Basically, the robot would score in its home row during auton and beginning of driver, then, after its home row was scored and there were no other robots blocking it, would drop the defender, which would unfold behind it, and could even wedge it in the opening of the goals, making it impossible to descore. The defender would be attached to the robot through braided nylon wire that would be in a tensioned spool on the robot, so the rope would lengthen or shorten as needed. the robot could then go on to either score the other goals, or just play defense the whole time. As far as I can tell, this does not violate any rules, you would just have to make sure that It does not get tangled in everything.
What do you guys think?

It would be similar to the cage on this

I disagree that wallbots will have any real role in this year’s game. It’s too difficult to block off enough goals to guarantee a win, and since skills has such an important role in the competition this season, I would focus on a purely offensive robot. Just my 2 cents.

Your probably right Xenon, but that’s not my point. This wouldn’t be a wallbot, you could build whatever you want in the space you have left, but something that would prevent descoring of the home row would be pretty nice in a match with 2 snailbots.

I know what you mean but this is still a wallbot (like mine last year) and I don’t think blocking home town is really viable because it is very easy to move that wall, there is nothing keeping it in place

… and could even wedge it in the opening of the goals, making it impossible to descore.

If you did this, making it just the right height, it could fit in the goals openings, sitting on top of the lip, it would be very hard to descore.
I’m sorry If I seem really aggressive about defending this Idea, I believe with some tweaking, It could work.

Your probably right Xenon, but that’s not my point. This wouldn’t be a wallbot, you could build whatever you want in the space you have left, but something that would prevent descoring of the home row would be pretty nice in a match with 2 snailbots.

It would be really really difficult to be at all effective, and I don’t think even at maximum effectiveness could it make your robot more competitive than a purely offensive one. Especially in skills.

It is actually pretty simple to guarantee a win of you have a goal blocker. Winning autonomous, claiming any diagonal row and 2 extra balls will guarantee a win. (17-16)

In a matchplay perspective, you can build a cage similar to 81k’s to block the center cage after making it fully your alliances color. Then the 2 robots can just physically block the goals on either side of the diagonal, and that will be a win.

It is actually pretty simple to guarantee a win of you have a goal blocker. Winning autonomous, claiming any diagonal row and 2 extra balls will guarantee a win. (17-16)

He didn’t say it would be easy, just simple.

I mean if you think you can do it who am I to say you can’t, but my opinion is that if you want to be competitive this season, going offensive is the best route. I would love to see someone pull off an unbeatable wallbot, but I simply don’t think that’s realistic.

I get what you’re saying. I don’t plan to build this, I was just sharing an Idea.

Tbh i doubt that it will even be hard to complete since there’s only 3 objective needed to guarantee the win.

You can just prindex the cage right after auton, and immediately release after your team owns the goal. Then, it’s just the 2 teams physically blocking 2 goals for 1min and 45s

if an alliance can score 3 balls inside the mid goal and deploy the cage right after the match, they’ll be pretty much unbeatable

O no it’s all good, I’m just going through my thought process cuz I thought of this towards the start but decided against it.

it could fit in the goals openings, sitting on top of the lip, it would be very hard to descore.

The main issue with this is that the goals are plastic so it has alot less grip than the ground, and it can’t latch onto anything because it has to be able to be pulled in any direction and move cuz of the bad q&a decision earlier that basically killed all innovation

My team is thinking of doing this on a smaller scale by just blocking 1 corner. It will be a lot more manageable, but less effective.

The main problem with a wallbot this year is that your opponents can just throw your balls over the wall and block your access to them since you would be in possession of them, not your opponent. Because of this, you would need to find a way to guarantee at least 2 rows with the wall and win auton.

yes but again it will inevitably be easy to move

Now, to change the thread up a little, how much would it help to have a powered hood, to change the angle of the hood? I think it might help for some things. For example, if you have a top roller that launches a ball out fairly far, then it would be hard to get a ball into the middle goal. But if you angle the hood up higher, there will be less compression, so the ball will not go as far, right? The main cost, I think, would be the loss of one extra motor.

Not worth a motor

I guess that makes sense… what do you think might help get balls in the center tower better?