After a few weeks of boredom in quarantine, I finally finished my first full cad design!

The robot is basically your average snailbot, but instead of the balls following a linear path up to a flywheel, they are held in a sort of loop which spins in order to index the balls. When designing the robot my teammate and I too a lot of inspiration from 2020 robots such as 148 Robowranglers and 254 Cheesy Poofs. The advantage of a robot like this is the higher capacity (7 - 1 right before flywheel, 4in spindexer, and one in intake) and the ability to choose which ball in the system in going to be scored last. This same ability also makes hoarding possible while maintaining your ability to score.

The Flywheel and indexer are powered off the same motor, through a single direction gearbox that utilizes the inertia of a 60t gear to shift a 12 gear between two connected 36t gears, with another gear directly driven off of the motor. This allows one output to spin in two directions and the other to spin in only one. If you want more information on this type of gearing I would highly recommend watching this video .

The hardest part of this CAD was making a single motor flywheel and indexer fit inside the size constraints created by the enormous spindexer in the middle of the robot. my first iteration of the gearbox was directly next to the flywheel. This would also work compared to the current design, but it would have put the robot at about 17.8 inches which is only a little bit sketchy. my second idea was to put the gearbox directly connected to the indexer, but that appeared to be impossible due to all of the drive motors in the way. 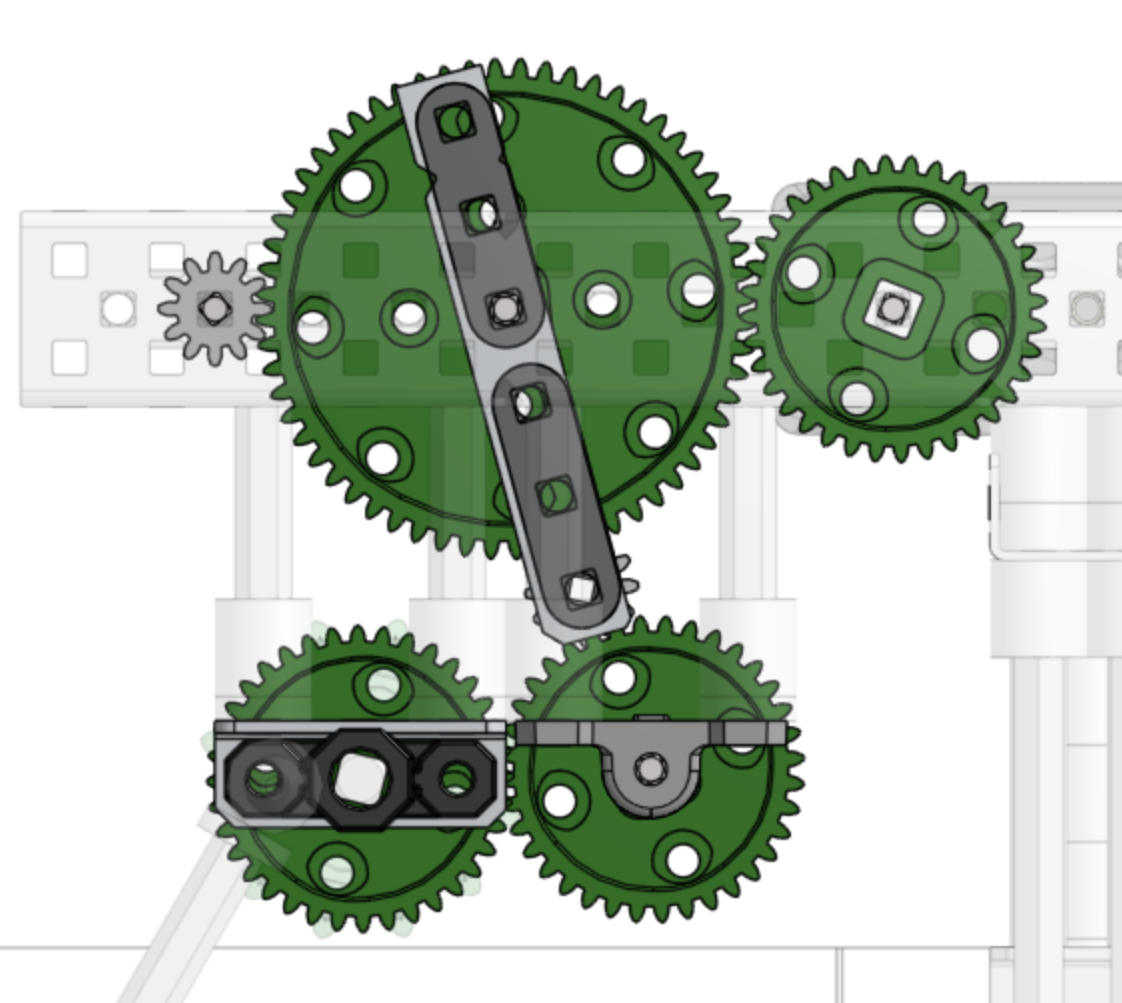 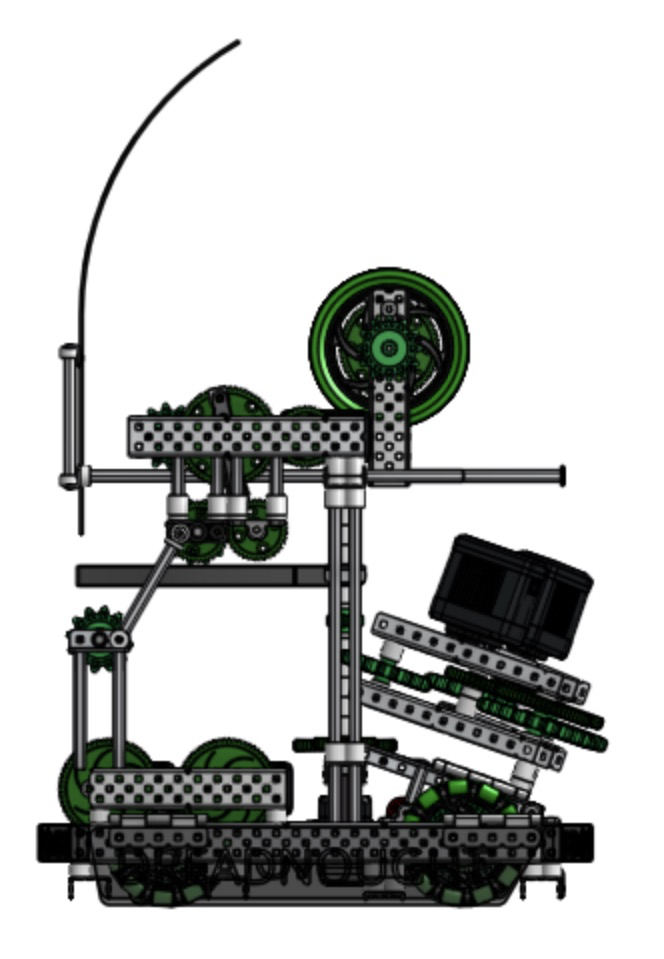 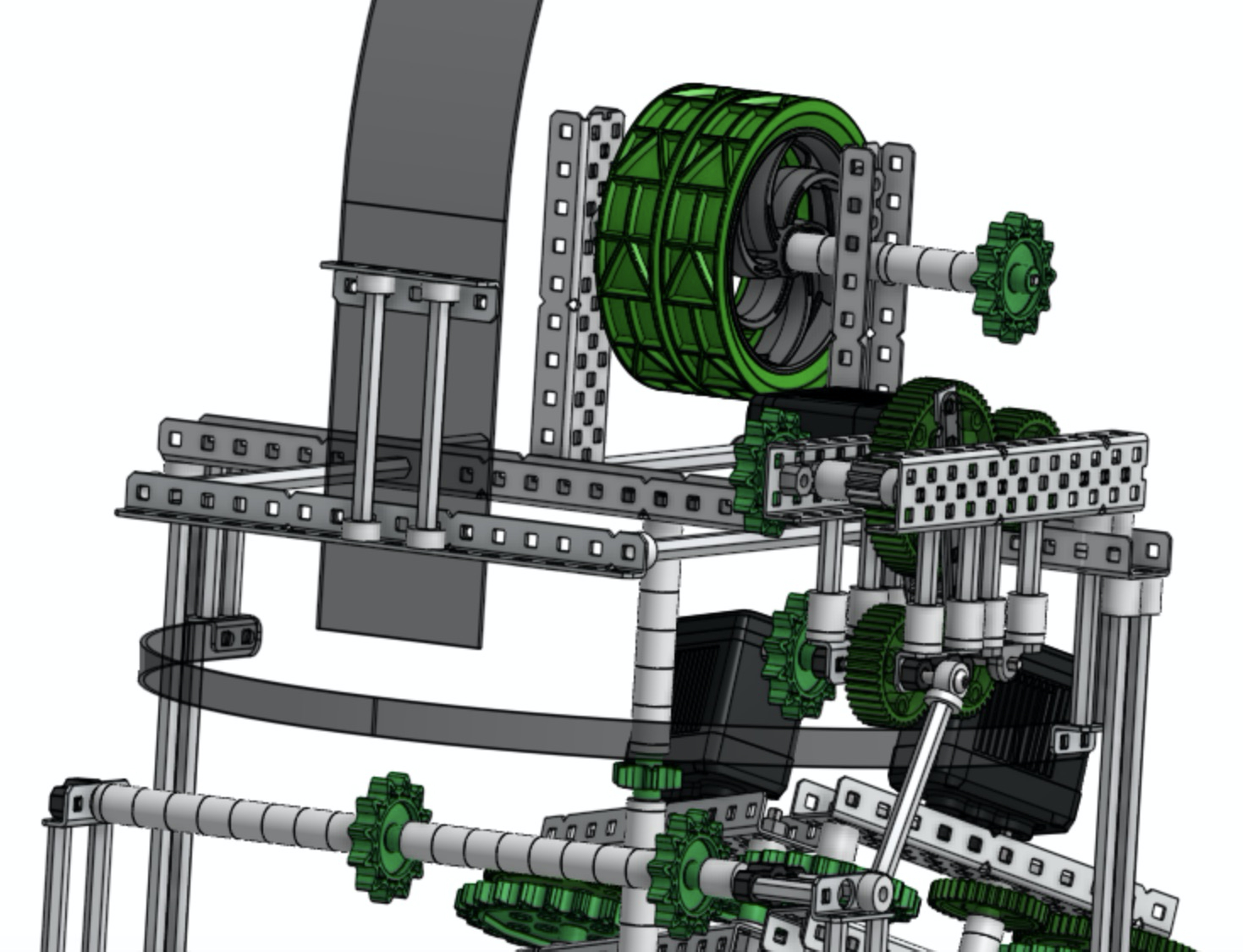 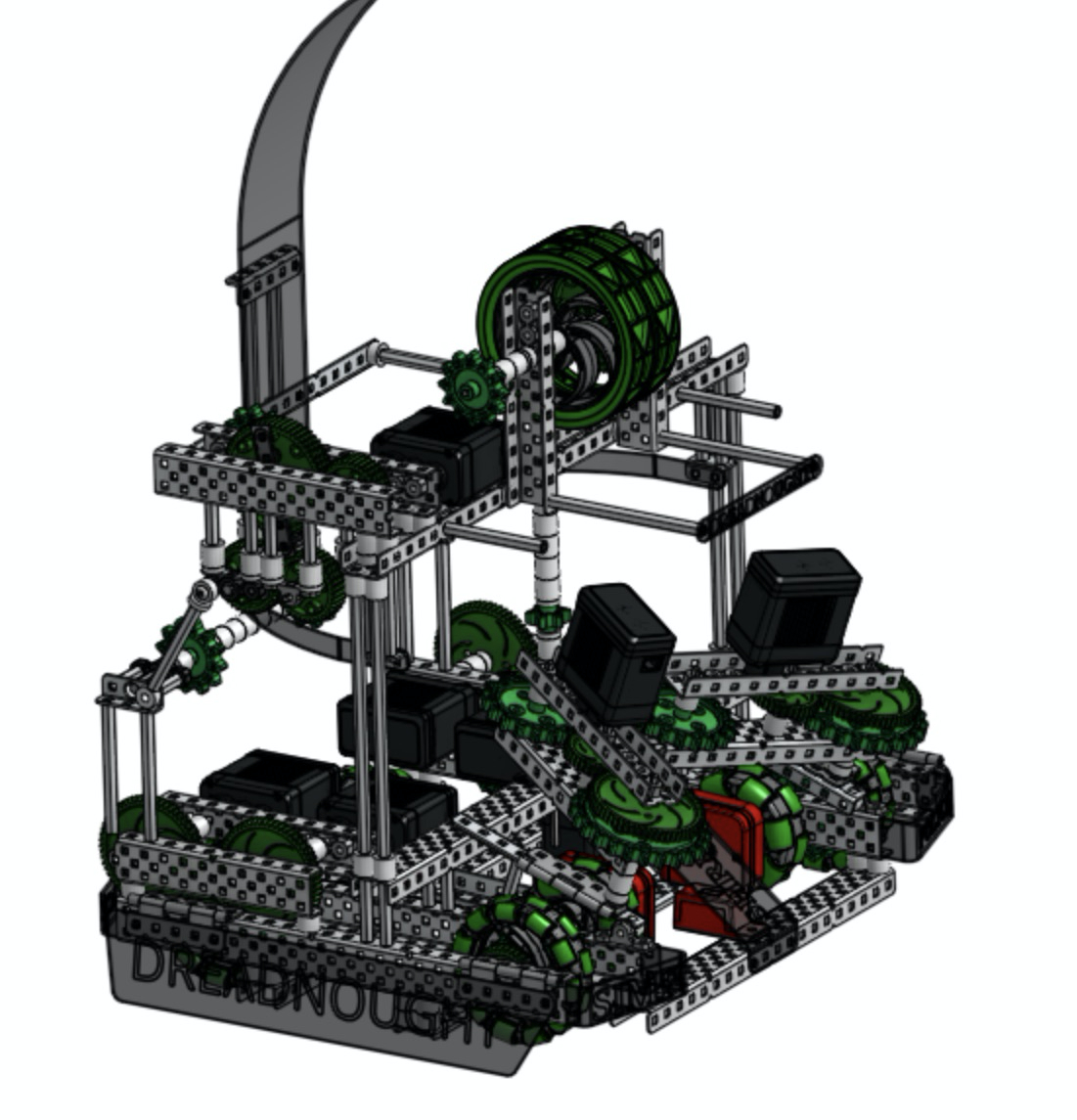 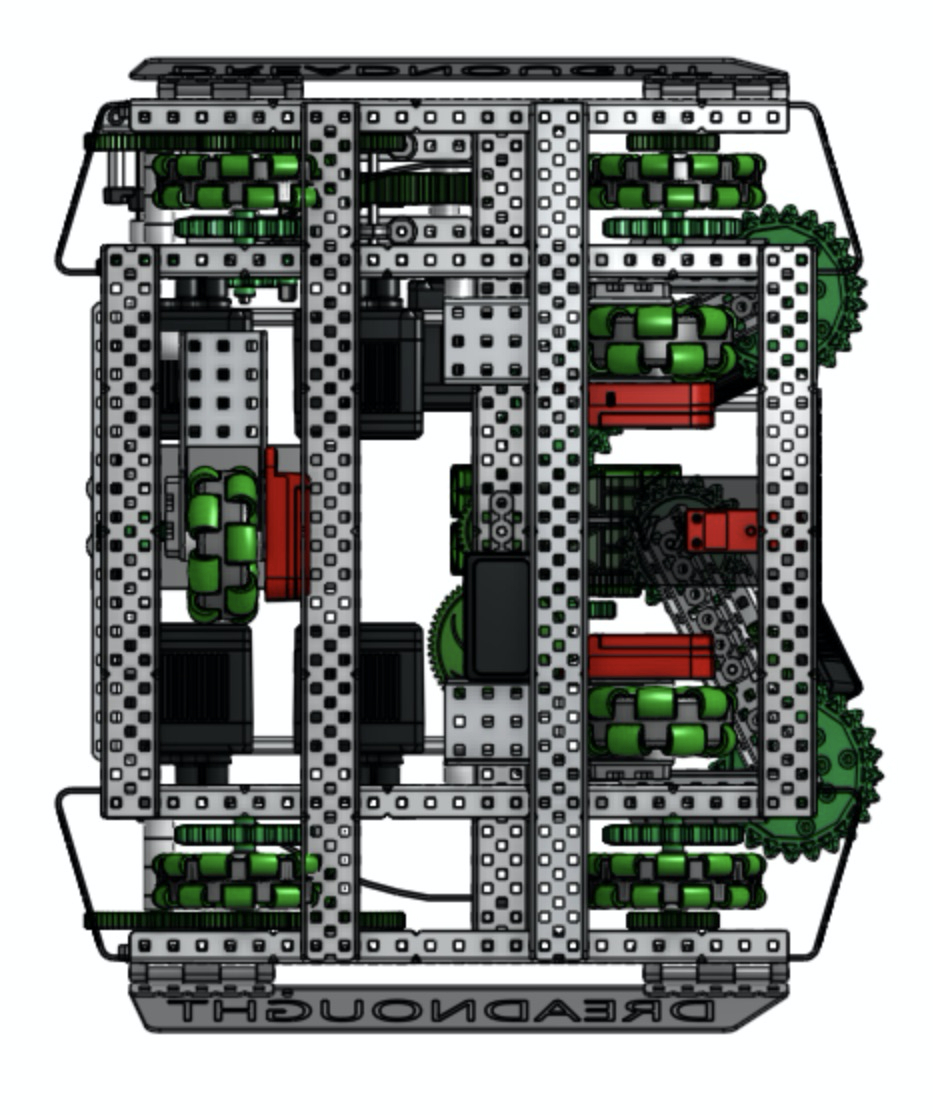 Feel free to ask any questions!

Looks good! In the 4th picture though, the intakes look a little crazy

Did you screenshot while in orthographic rather than rendering?

Yeah, I have basically no experience with getting a good render lol. As for the intakes, large onshape assemblies get kinda funky, and I couldn’t get them into position.

I am curious about a few things. First, do you think the joint on the intakes will be too weak as like just one non boxed long screw? Also, how come you plan to use a gyroscope with odom?

If this works and can hold 7 while otherwise functioning like a normal flywheel robot, it will be amazing.

First off, it looks pretty funky my fellow OnShape brother, and second off, what is the sprocket on the back meant for?

The hood looks very unsupported and the motor distribution is a bit wonky, but those are both fairly easy to fix. Overall it looks alright. Nice cad

what is the sprocket on the back meant for?

The sprocket pushes balls out of the spindexer into the flywheel

how come you plan to use a gyroscope with odom?

I got the intakes to behave. 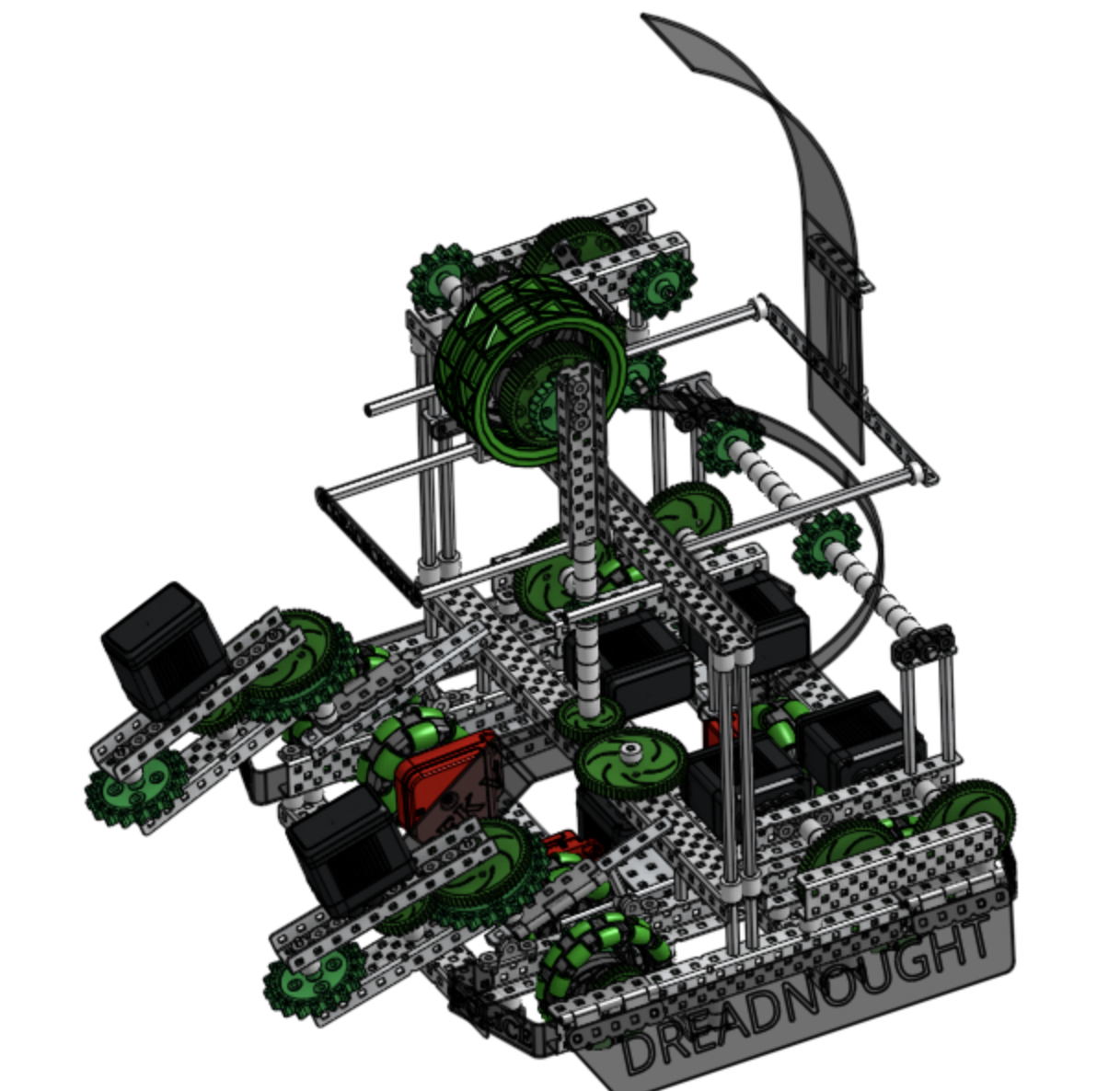 I think if and or when I build this, Im definitely not gonna use that hood. It was kinda just put there as a placeholder for a hood that could open and close.

Is this like a vex version of FRC 1690’s robot? Because if so, thats amazing. I didnt think anything like that could fit in robot dimensions

Diff swerve can be done in vex. Its just why would you

I think if and or when I build this, Im definitely not gonna use that hood. It was kinda just put there as a placeholder for a hood that could open and close.

Just a tip, you probably shouldn’t use “trial and error” to build a hood because getting ideal compression is extremely tedious that way. With CAD you can get exact geometries which will save you a significant amount of time and will make trouble shooting much easier.

I would highly recommend not using a super long axle. It bends a lot easier if it’s longer.

Yes, I agree with you. I guess I should’ve worded it better, but in terms of the general geometry, using CAD is the way to go. Obviously adding antislip mat and foam where needed should be done irl.

That is really cool I wish I could CAD that well.

I was wondering if we could have the intake and the indexer run by the same motor via the single directional gearbox, like in the video you provided. The reason why I ask this, is because I plan on having a separate gearbox and ratchet for the flywheel. Do you guys think there are disadvantages for having a single directional intake and indexer, or is it better to have in with the flywheel?