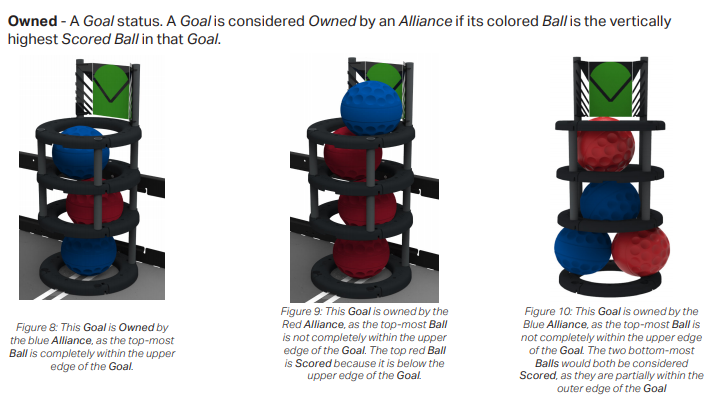 This is the definition of an owned goal. What I want to know is which team would own the goal if two balls from opposing alliances were both scored in the bottom section like in the third image but without any balls above them. Would it count for either team, neither team or whichever seems higher according to the ref?

Can either of them be physically “vertically highest” from that position?

My thought is that neither owns that goal…

Owned - A Goal status. A Goal is considered Owned by an Alliance if its colored Ball is the vertically highest Scored Ball in that Goal.

I agree, i don’t think they would be “vertically highest” since they are not stacked on top of each other. Neither team would probably get the score unless one the balls was to be pushed out of the bottom declaring a point to the other team.

The question was actually about

not about the third image as a whole. There will probably have to be a Q&A question about this topic because both balls would be at about the same height, so which alliance would own the goal?

then the following determines the “scored” for both balls:

Scored - A Ball status. A Ball is considered Scored in a Goal if it is not touching a Robot of the same color as the Ball and meets all of the following criteria.

So both meet criteria of scored per definition of Game manual and depending if either is vertically “highest”, then they get “owned” if neither meets criteria of vertically highest, the goal is not “owned”.

No need for Q&A - it is possible for goals to not be “owned” by either alliances.

My mistake i meant which alliance would own the goal not which balls were scored.
(Has been edited in original post)

No need for Q&A - it is possible for goals to not be “owned” by either alliances.

Yep, based on today’s rules, and the vertical higher thing, it would be “Not owned” and kick the balls out of the goal.