On the chance I’m just really confused or the hope that they can do this, I have to ask for clarification. I have a student team of three that is adamant they want a bot that pushes and lifts (not using any kind of fly wheels). I know about the no touching the high goals rule but then I read this and is a clawbot mechanism (just in idea not last years style) even legal before they redesign? They were thinking about lifting the front end of a disco (which is aluminum) and escalating the disks into the goal. They can’t do anything vertical from inside the low goal brackets? 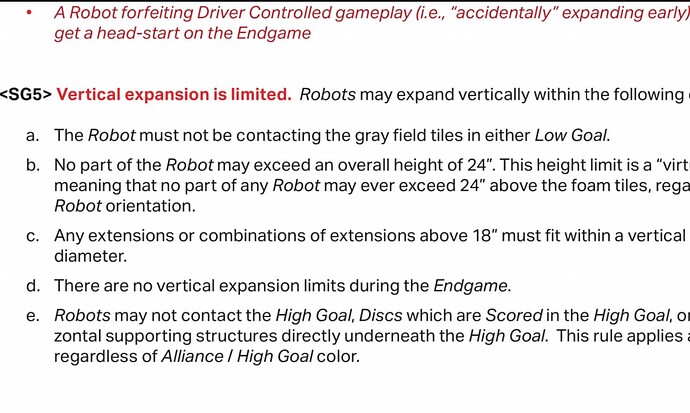 The claw bot is literally illegal in this next game due to the expansion limit. The best part is that they used a claw bot in the reveal video. Big oversight by vex if you ask me.

This thread talks about clawbot legality.

Yes, as stated in the rule you quoted, no expansion at all above 18” is allowed inside the low goal, and outside the low goal it is heavily restricted. This makes it impossible to make a legal robot that lifts the discs into the goal.

That’s what I thought but we literally just competed against a clawbot so I left confused and the kids left with a new idea. Thank you guys for confirming! I’ll message that team now that it’s def a no go.

I don’t think that you can use a clawbot anymore because of the expansion limit rules and stuff, and my team and I also thought of it at the beginning of the season, and decided not to do it. Wish I saw this sooner!!!

I think it is important to keep in mind that none of the pre-designed trainers, the so-called hero bots, were ever designed to be competition-level robots other than for perhaps the first competition of a novice team. The purpose of these trainers is to help a novice team learn good building technique with the vex system, and perhaps give a starting point for a team that doesn’t know what to do next. After the first competition, or even after the first practice scrimmage withother teams withinyourorganization, one would expect these trainers to be either heavily modified or redesigned to play the game at a higher level.

As to the OP’s original comment, it would certainly be fine to adapt elements of the various predesigned trainer builds to the current game, within the boundary of the rules. But without building some sort of launcher, you can’t score in the high goal and stay within the limitations of the game manual.

the claw bot can’t even put disks i the high goal , roll rollers, and even move them into a low goal. mabye just waste time driving the bot around the field durring skills for fun.