I’m trying to find an effective way to hold the slapper arm down so I can shoot faster in the match. I have tried using the vex ratchet and pawl and it wasn’t strong enough. I was wondering what alternatives you guys are using. Pretty much the same mechanism as most double catapults. It’s a 12 tooth driving a 60 tooth slip gear.

Is it a slapper or a 2BC? @ZackJo has an insanely good kicker (slapper), but I’m not sure if he’d be willing to share quite yet. (He’s working on a reveal)

I made a custom ratchet for my 2BC. I’ll see if I can scrounge up any pictures for you.

that would be really helpful, thanks

@Atomic Okay, I scrounged up This post and it has the best picture I have of it and an accompanying explanation. Here’s the picture from it for quicker reference. 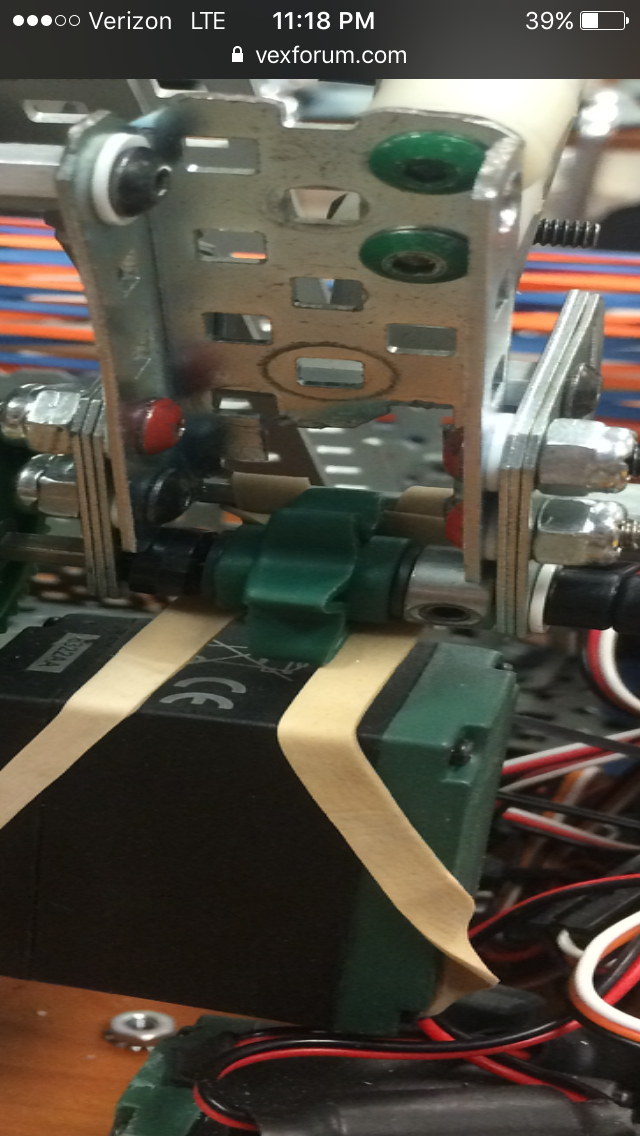 Edit to add information:
There is an axle inside of those gussets constantly pulling down on the 6t sprocket. The way the ratchet spins, the axle holds the sprocket, and thusly the slipgear it’s mounted to, in place. Hence being effective.

Still, please don’t use a 6 tooth sprocket. The extra space is worth it so that
https://www.vexforum.com/uploads/default/original/2X/b/ba61cc8bdda27806dd8a06230a1f80015380c3a9.jpeg
Doesn’t happen. I swapped it out once, and it was fine for the rest of the season. Just a random building flaw that can’t be seen in the picture coupled with strainious use as it shouldn’t have been used. (Use had to launch those caps, didn’t you, GASL?)
I’d be glad to help out in any way more I can.

This isn’t the only way to make a custom ratchet. You could also stack together at least 2 pre-fab ratchets and pawls to achieve a higher strength.

It might also help to see the mechanism in question, as I’m still not sure I completely understand.

So my team built a 2bc for states and we used 2 motors: 12t driving 36t that was on the same axle as a 36t slip gear that drove the 60t catapult. that was enough to use a pot to use a fire and draw back loop. aka the motors were strong enough for us.

Did you use V5 on BrakeType::Hold? I had a very similar setup (it would take forever to find a picture, so I’m not going to try), but mine was 393.

I’ll try get a photo for you but no i havent use brake hold because ive heard it burns out the motors,

I am using two v5 motors by the way

It just depends on the application. If you heard it on here, it might’ve been me saying it. Others have had success with it, but I still would go for a ratchet as a backup to take some strain off of the (delicate and somewhat scarce) motors.

At the time, breaking a V5 motor was bad news because it was difficult and time-consuming to get a replacement. But now it’s not so bad, and I might consider risking it, depending on the gear ratio.

I’ve heard of that working. I would think brakeType Hold with 2 motors could handle it. But I might try to throw back on a (or two) Vex ratchets to try to be ultra-safe this close to Worlds.

If you gear the ratchet up to be a faster ratio than the slipgear, it will support stronger loads and have higher accuracy. I did this on my catapult 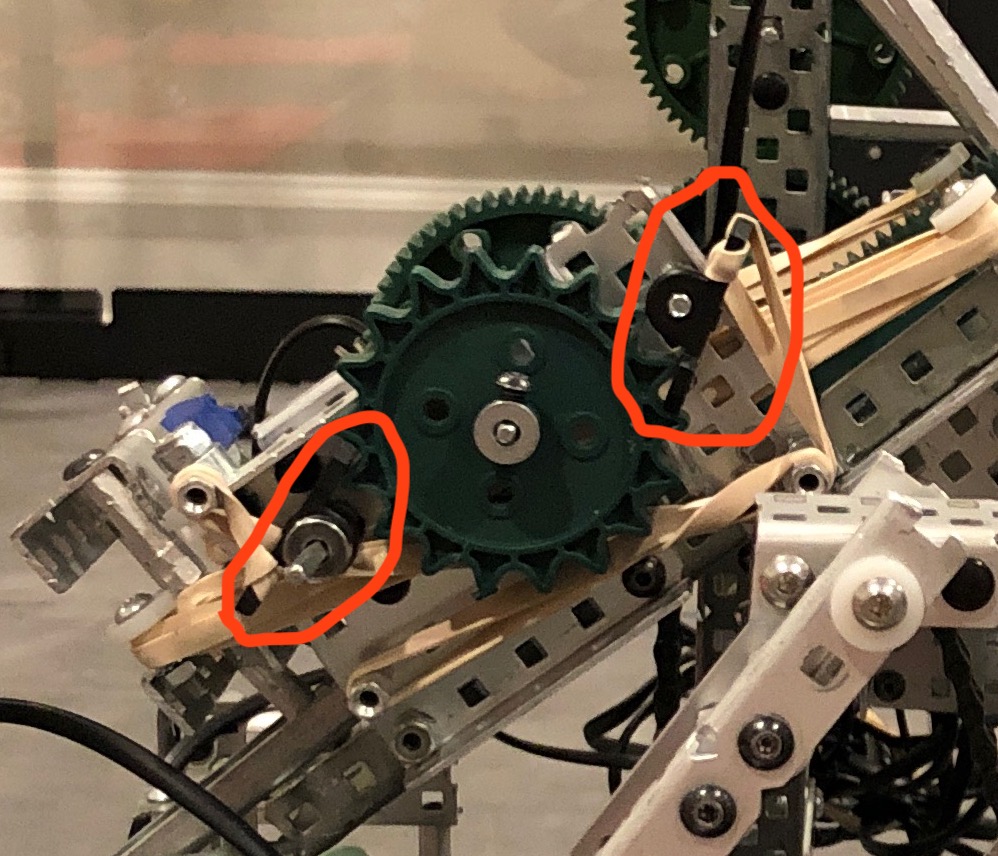 I’m not sure how much this helps, but I’ve made some rlly effective ratchets by simply placing a sprocket at the end of the axle and then using screws to line up pillow bearings right alongside it. Then, I just slip a rubber band in and tension it the way I want to. One point of contact might not be enough to hold that force, but for me 2 is enough.

This is larger than my ratchet, but it looks to be just as effective.

I tried motor braking and it worked really well actually. I think im just gonna not use a ratchet after all.

Sounds good! If you see any signs of wear on the motor, I’d want to add a ratchet. I hope you have spares just in case.

I would be weary of the motor hold. How many rubber bands do you use?