I’ve found there’s actually a lack of discussion about what people are currently doing for their robots. Specifically, pictures of their robots. Now, I understand some people don’t want to have to show what ideas they’re using. However, for someone like me who doesn’t want to use other people’s ideas, but merely see what people are using and what seems prominent, something like this sounds really helpful. If you want to show off your robot, feel free to share it here. This is just to have fun sharing pictures and maybe talk a little about what is popular or what you think will be good in the meta if you see something that strikes your attention. Here’s mine: 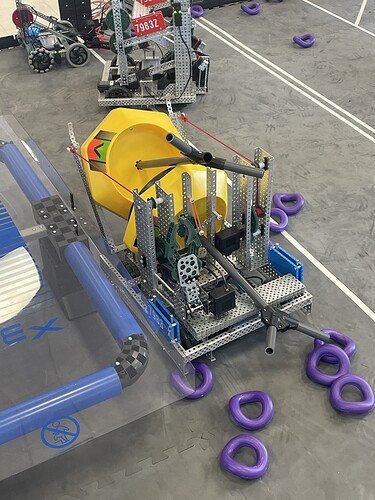 It’s really fun and completely takes away the use of a mobile goal by storing it inside itself. We are making it better, but it worked well for our scrimmage we had last weekend. Ignore the claw on it. It was a quick add on we put on the day before for autonomous.

in the past, we normally see some usual suspects putting up early season reveals, etc.
but with all the Covid restrictions, etc… I am not surprise if many teams are still not able to go back to the lab.

but thanks for sharing yours. always good to see this spirit of sharing still ongoing

I’ve not really properly revealed my bot yet, mostly because I’ve been busy making it, but I might make a reveal video sometime soon.

Every robot is different this year, which is what I love about this game. There is no meta.

It seems the most popular robots though can be split into 3 groups, pushbots, goal only lifters, and alliance goal ringbots.
each of these categories has many different designs branching off, with some overlap as well. For example I’ve opted to go for a robot that can score rings on an alliance goal, and then lift that goal up on the platform.

The way it does this is by grabbing an alliance goal on the front of the lift with a pneumatic clamp, tilting the goal up so the post pivots into the robot and under the ring conveyor so that it can suck rings up the back and up a ramp onto the alliance goal. Then it can tilt back down, and lift the goal onto the platform. It can also lift any of the neutral goals as well.

Originally it used a differential on the lift to achieve 6m drive and 4m lift with only 6 motors, but we found that the friction caused by the system made the drive overall weaker than if we just gave the drive 4 motors and the lift 2, so we changed to that. The differential worked fine, but it wasn’t worth doing. 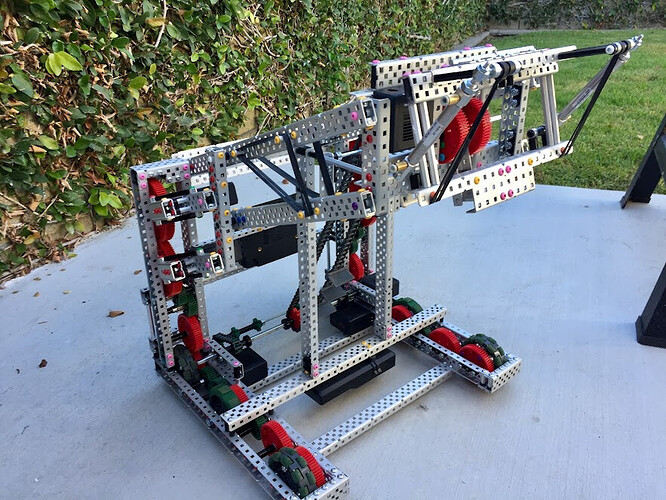 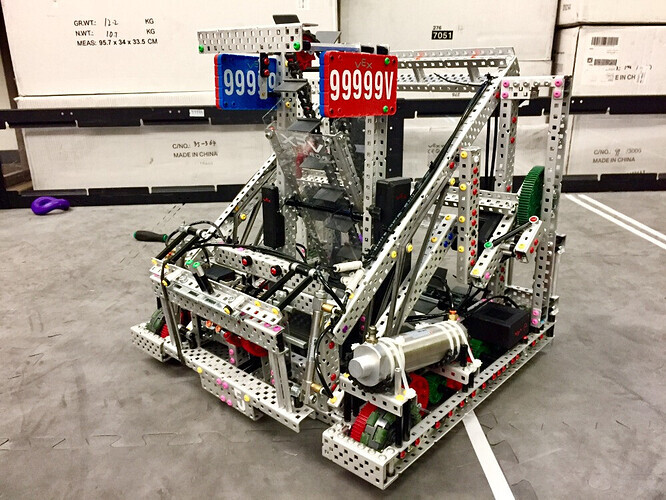 we had a lot of fun at clash in the canyon last weekend, and I think it proved that this type of robot is viable, at least for now. But it also proved to me that goal only lifting robots are also viable, as are other variations of alliance goal ring scoring robots, there are so many good ways to do that task.

but I might make a reveal video sometime soon.

Plenty of new half•alive songs to pick from… 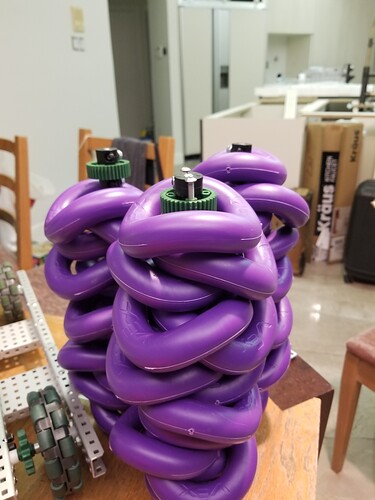 I need to see the internal structure of that. Does it really work?

The internal structure isnt complete yet because school exists 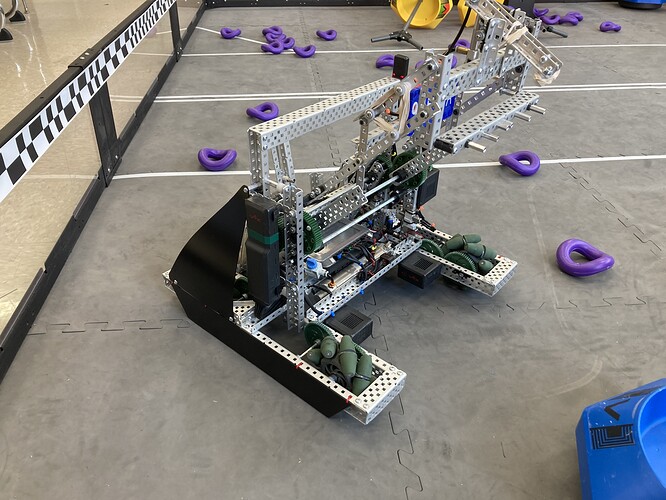 sus half reveal: Christopher furry amogus
dont ask us how we got that name 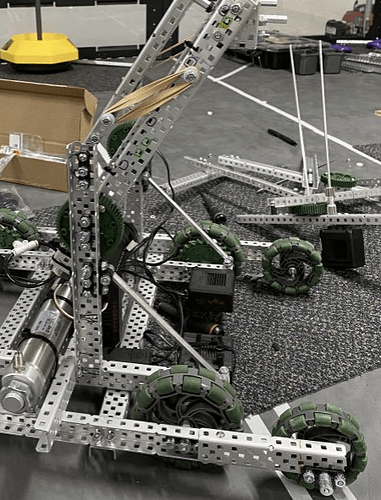 as for “furry” we have lots of furry friends helping robot builds and testing!. 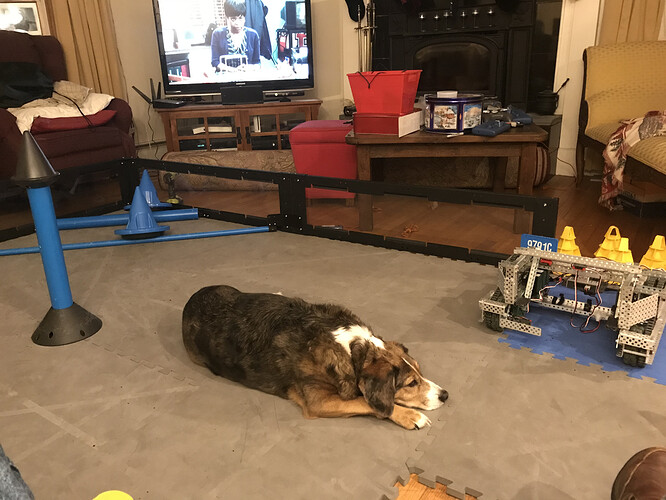 Screw Joints, if you are cantilevering it (and sometimes even if you aren’t).
Screw-metal-keps(or nylock) nut-spacers/washers-wheel-nylock. 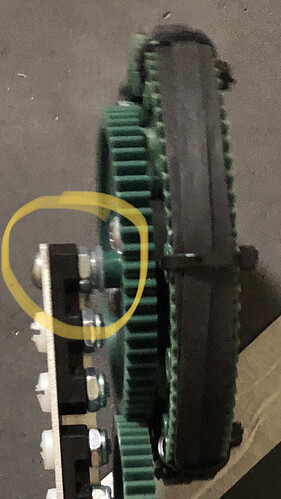 I’ve used a thin nylock instead of a kep’s nut, that would be up to you however. Hope this helps!

LEEEEEEKS
I need to see the rest.

Edit:
Imma leek my robot too.
(Don’t mind the stuff in the background. I do robotics in the garage.) 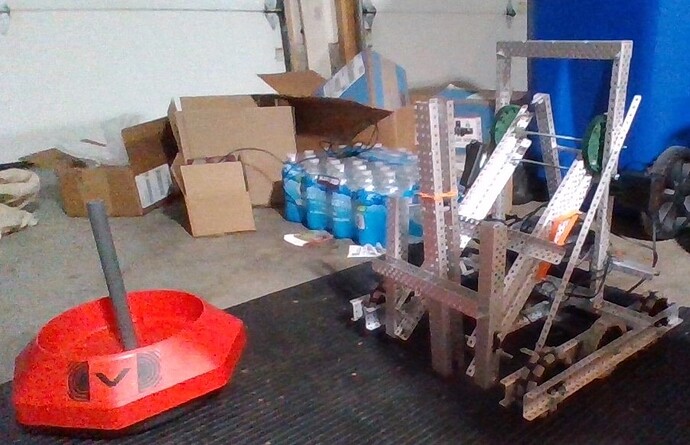 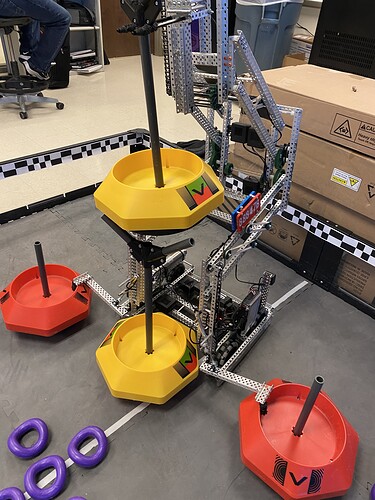 Here’s my bot. We took a different approach, but wanted to be a consistent ring scoring bot with possession capabilities. Solid in scrimmage matches, got first comp next weekend

Imma leek my robot too.

Sorry @kmmohn, beat you to it this time 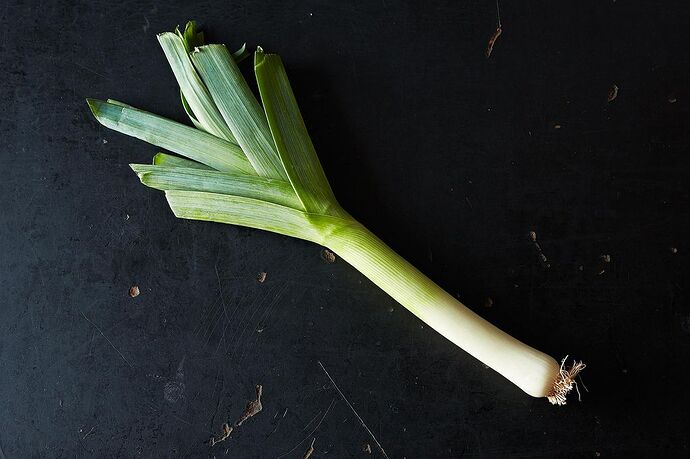