So for no particular reason I decided to write a small application to control the competition modes in the cortex. The app essentially does the same thing as the competition switch windows in RobotC and EasyC, but also allows a timer to run to disable the robot at the end of the autonomous or operator control period. The application is not quite ready for release, it’s working well for systems setup with RobotC but not yet EasyC (which uses the program port on the joystick in a different way).

Connection is only using the orange programming cable to the joystick with the prolific serial adapter.

Hopefully release something between Christmas and new year if anyone is interested.

Here is a preview screenshot of the application running on OSX in Windows 7.

Very nice! That could be extremely helpful when doing practice matches on a meeting night. Now all you have to do is add the fanfare and buzzer sounds and it’s official!

looks nice! when will this be avaliable?

looks nice! when will this be avaliable?

Probably next week, I need to finish testing with EasyC generated software.

RobotC does not generate any messages on the serial port unless the PC asks it for status or in reply to commands. EasyC on the other hand sends out messages not only generated by the PrintToScreen and PrintTextToGD functions but also internal information messages. All of this needs to be filtered out so I can determine the competition control status and also battery voltages etc. The code is written but I need to do some more extensive testing before release.

May add the sounds Simmons 2.0 suggested as well.

I’m releasing a beta version (perhaps really an alpha version) of this code. The Mac version has been tested on OSX 10.5 and 10.6. The Windows version on Windows XP SP3 and Windows 7 Pro 64bit, but only with admin rights.

The joystick should be connected to the PC/Mac using the orange serial cable, this code does not work with a direct connection using the USB cable to the cortex, in many ways it does not make sense for competition code to be running that way anyway. Select the prolific com port from the pulldown menu. The PC version will not run if either RobotC or EasyC is running as that will be using the serial port.

The code has been tested with competition code from both RobotC and EasyC, however, if there is significant use of the PrintToScreen or Graphic display functions in EasyC it may interfere with operation.

It is possible for the detection of autonomous or driver control modes to become out of sync with what the software thinks the current competition state is. This is mostly due to the fact that a single command is used to change from autonomous to driver or vice verse. When in the disabled state the software is not able to determine if autonomous or driver will be selected until after the enable command is sent. Usually everything works ok but it may be wrong.

Sounds were added that are the same as the tournament manager but can be disabled. To change autonomous or driver match durations, select the text in the editfield next to the appropriate label and then use the arrow keys to change the number. Due to the way the competition modes are enabled timing may not be as accurate as the tournament control software provided by VEX. This software is not intended to be competitive in any way with software provided by CMU, Intelitek or VEX.

and the Windows version from here.

Neither is code signed so the OS will complain the first time you launch them.

Depending on feedback I may or may not fix bugs or add features, the software is provided free and no claims are made as to it’s reliability or anything else.

Edit.
Here’s the link for the prolific web site driver page, it was down yesterday.

Can you connect multiple joysticks for competition?

Can you connect multiple joysticks for competition?

To be able to do this would require multiple programming cables connected, one for each robot. The software is not designed to do this and, although theoretically possible, was not the intent of this application. If there is a demand I could update it to handle perhaps two robots but beyond that is probably not practical.

You can use a partner joystick as usual with a single robot.

Sounds were added that are the same as the tournament manager but can be disabled.

Did you ask VEX for permission before copying & distributing the sound files?

Did you ask VEX for permission before copying & distributing the sound files?

Actually no, I had asked VEX (JVN) about disclosing other details of field control that I thought would be more sensitive and they seemed to have the attitude of “why are you even asking”. As this code is just for fun I didn’t think anyone would mind, if it’s a problem I can replace them with equivalents, it makes no difference to me. Would you prefer I do that ?

It’s quite possible no one will care, but it’s still important to ask. All creative works, including software such as the Tournament Manager, are subject to copyright, and if you haven’t been given permission to copy it then you are violating that copyright. I saw you attached your own copyright notice to your software, so you obviously gave some thought to it.

if it’s a problem I can replace them with equivalents, it makes no difference to me. Would you prefer I do that ?

It’s not up to me - VEX/IFI are the people you need to ask.

I’m not trying to be a pain here, but I think this is an important opportunity to point out that just because software is available for free download it doesn’t mean that a user can extract chunks from it and redistribute it. Perhaps it’s a good educational opportunity for the numerous younger members of vexforum.com.

I’m not trying to be a pain here, but I think this is an important opportunity to point out that just because software is available for free download it doesn’t mean that a user can extract chunks from it and redistribute it. Perhaps it’s a good educational opportunity for the numerous younger members of vexforum.com.

Dave, whilst I agree with your point of view and in no way support software piracy or stealing, we’re talking about sounds of buzzers and cymbals, not exactly the Beatles, which were probably pulled from some royalty free library anyway. I think it’s stretching the point to say that it’s copying the tournament manager software (which by the way does not display anything during installation saying that it’s a copyrighted work, not that it particularly matters). The sounds were on my PC and contain no metadata or DRM indicating they are copyrighted. Simmons 2.0 wanted sounds, 15 minutes later we have sounds. I’m just going to fire up Soundtrack Pro and replace them with look a likes, it’s far less trouble than bothering IFI. So much for trying to help the community.

The executables are down for now, sorry kids.

Windows from here
Mac from here

No changes other than sounds created from scratch using garageband, soundtrack pro and Audacity. They are deliberately a little different but lets hope Tommy Walker doesn’t come after me now (well he’s dead so I doubt he will). What a waste of time … there are far more important issues in the world besides the copyright on a door buzzer and the da da da charge.

I posted a new version (0.22) up on Box after some feedback from a demo we did at a junior high school last week.

New features are.
Sounds are now customizable, you can use the built in defaults that are similar to the Tournament manager software. You can disable individually or select your own .mp3 or .wav file to use for each of the sounds. For example, selecting an mp3 file from your iTunes library to play throughout the match.

Goto Apple->preferences (OSX) or About->options (Win) to access the dialog to set options.

Enable the large timer window from the tools menu. 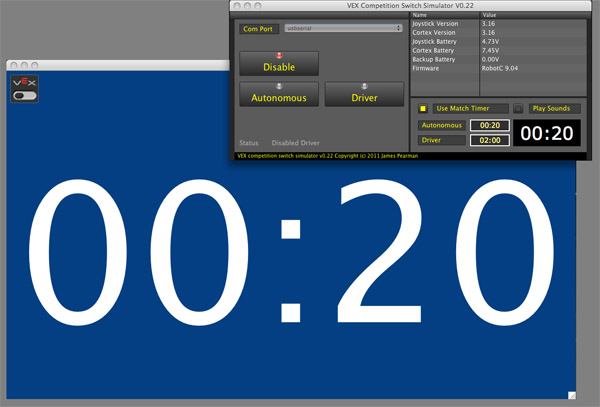