my students are trying to increase the speed of their shooting mechanism for the Slapshot game. They are trying to build a compound gear ratio but can only work on a 2 x 8 beam because otherwise it won’t fit inside the bot. Is this possible? I can’t seem to help them figure it out either and some help would be appreciated. They are trying to create more toque than a 12 tooth turning a 36 tooth gear can provide.

Could you send some pictures of the space they have, and how the system they built current looks?

The first is their first try but it doesnt work for reasons we cant figure out. The bottom2 gears spin indepently of each other as they are are on 2 axles. The other pic is of the bottom of the bot showing the space they have to fit mechanism. 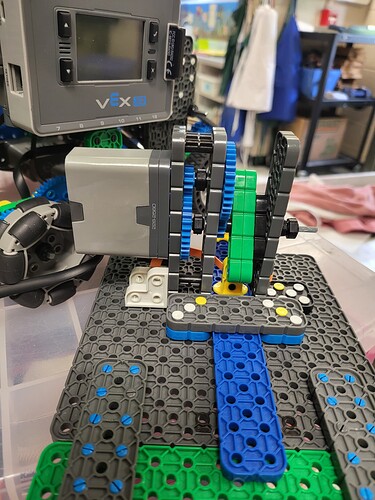 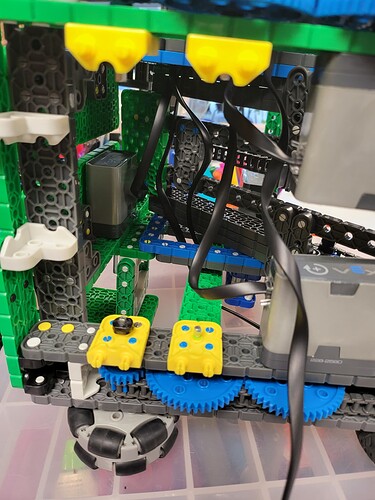 well they just figured out that any tension will cause the mechanism to fail. it works fine without anything in it. still no idea how to fix.

Torque and speed are opposites when using gear trains. And at the start of your first post, you say they want speed, but at the end, you seem to need torque (strength).

Your gear train has big gears turning smaller ones, so it’s built for speed. However, that means it’s also a lot weaker.

You’ll either need to make do with less speed, or strengthen it somehow (I’m not familiar with IQ rules so I’ve no suggestions).

Torque and speed are opposites when using gear trains. And at the start of your first post, you say they want speed, but at the end, you seem to need torque (strength).

Indeed. It seems you have increased the speed by a very significant amount too. How much rpm is the iq motor, and what is those gear ratios? It seems that you might want to figure out an alternate method to get a rate of fire as fast as that, for example add more levers to the mechanism pulling the shooter back, make it a 3 or 4 way instead of a 2 way. As long as it still allows the shooter to make a full actuation before the next lever catches it of course. You could also add a second motor if you have one available, that would allow it to go at higher rpms with a higher ammount of torque as well. You coule also try to figure your goal of how much shots per second you want, and then gear your motor to get half of that (you have two levers so that means it will have 2 shots per 1 full rotation). For example, lets say you want 10 shots per second, since you have 2 levers you only need to gear the motor to get 5 rotations per second which is about 300 rpm, lets say the iq motor is 100 rpm (I don’t know the actual rpms as I don’t use iq, this is just an example). You would want a 1:3 gear ratio allowing your 100 rpms to go to 300. That isnt a very big gear ratio and could easily fit in a compact area. I dont know what your current gear ratio is but it seems very excessive for a shooter.

Are you saying you want to have a high torque lever (higher than a 3:1 ratio) rather than a high speed lever? If that’s the case maybe your lever has too much leverage against it? Although if is geared for high torque than I dont understand how the shooter could possibly have too much force to stop the mechanism.

I bet if they just powered it directly they would be pleasantly surprised. No gear ratio needed and the motor is already in line with the spinner.