Conflicts in the rules between Sg8 and Possession definition

My organization had a disagreement in the interpretation of specific scenario. If both teams in an alliance were to block access to have of the field by placing walls along the autonomous line. Would they both count as having possession of any balls on the other side. If there were 4 unscored balls on the side of the wall that the robots were on, would it be illegal.

The argument saying it would be illegal quotes the definition of possesion.

• Robots on the same Alliance working in tandem to block access to Balls would share the Possession
of the Balls.

The argument saying would be legal quotes rule Sg8: 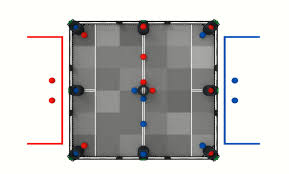 If both of your robots are only blocking access to 6 or fewer balls I think you would be in the clear. because in the case of 2 walls, it would be impossible to say which robot is possessing which ball, which I believe is why the “both robots working in tandem” statement is even in the rules. (so that 2 robots can work together to block 6 balls without refs having to try and figure out which robot some ball 6 feet away from any bots is being possessed by. )