Could the shade of red we used to spray paint our robot be considered illegal under rule <r13d>? 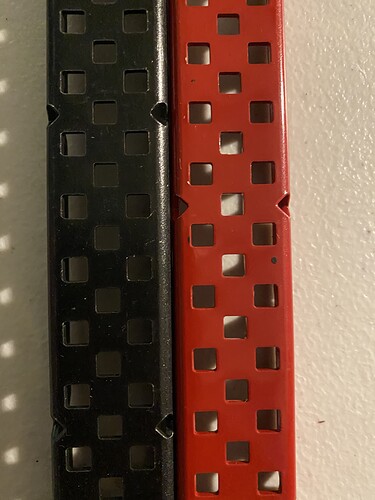 Under rule 13d, decorations that impact the vision sensor are considered functional and therefore illegal. Would the color that we used for the c-channel on the right be too close to the color of the goals? One of my teammates is very paranoid and wants to be 100% sure.

Depends on where it is on the robot in relation to hypothetical vision sensor placement r, but ultimately depends on the discretion of the head referee. But I would err on the side of caution and say that it’s illegal as per the rule you have mentioned. 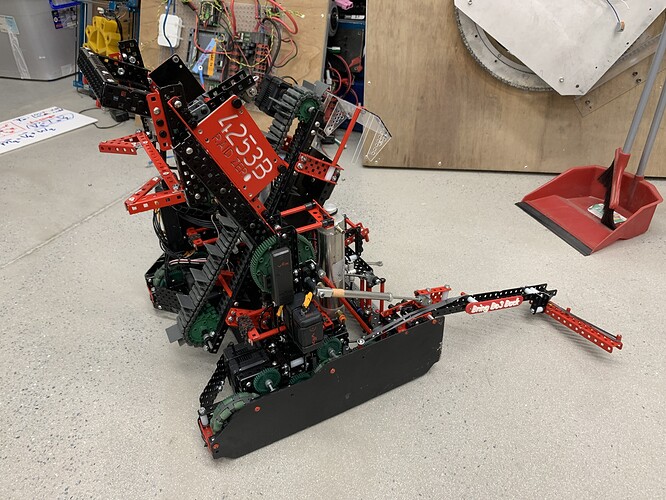 We are still unsure if we should swap out our red metal. Your metal seems to be a brighter shade of red, that’s closer to the color of the red alliance goals, so we were wondering if you plan to swap out your metal, or if you are taking any precautions in case the referees rule your metal as violating 13D?

If VEX didn’t even care about blatant cheating at worlds last year, I doubt they will care about me having red metal for LRT.

I’d just say that if you want to use red metal, go for it but know that there is a risk. If you are scared about the risk, don’t use it.

for your robot in particular, I think it wouldn’t violate the rules. The red is spread out enough and just in small places where a vision sensor shouldn’t be distracted. But also if the head ref says its illegal, of course there’s nothing you can do about it

I understand that the head referee has the final say if the robot passes or not, but I was just wondering if we could receive input regarding the usage of red metal on our robot. Thank you. 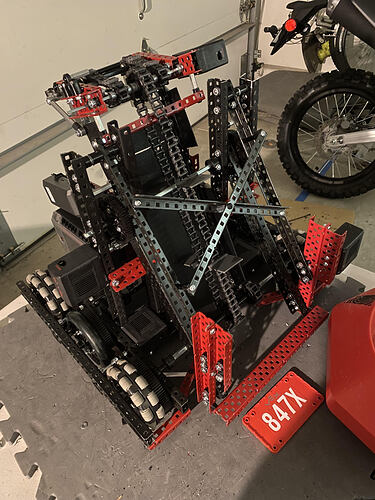 With how little there is, and how far apart it is, you could be fine

I guess the shade of red is a bit irrelevant and more comes down to the tuning of your opponents vision sensor. Think what the rule is there to protect.
Let’s say your opponents Vision sensor code works perfectly at locating the goals when your robot is not on the field, but fails when your robot is on the field, since it is detected as a goal, this is where the rule comes in to play.
The chances are slim, since Vision sensor use is likely to be in autonomous, and therefore optimised for objects near to it. But that is the risk you are running.

Yeah, we’re just going to remove the red parts and swap them out with normal ones. The risk isn’t just worth it for use considering that as a team we’re spending over a thousand dollars to go to worlds and it would be terrible if we got DQed there. Thanks for your input!

Isn’t the question of legality of the red parts is kind of moot, because vex makes perfectly legal bright red gears themselves?

Would any inspector flag a team for having red geartrain exposed on either side of the robot?

Not really, and maybe. But more not really. These things are small and you’d be unlike to write code looking for an object that small. A robot is much bigger and so more likely to be big enough to be mistaken for a goal.

I would say this would be rather risky and personally I think most refs would probably disallow that (or some teams might argue that your robot is messing theirs up in auton or something.)

On the other hand, the GDC has put some onus on teams using the Vision Sensor that it is part of the challenge in using “advanced sensors” is dealing with less-than-perfect situations

It is impossible to avoid all elements of ambient / environmental visual interference, and this is an expected part of the challenge associated with using advanced sensors. This could include (but is not limited to) things like multi-colored VEX parts, team shirts, varying lighting conditions in different venues, etc.

Historically, I would say that teams that paint their robots red/blue or other colors similar to field elements have not been asked to change. Adding a non-functional decoration that looks like a Ring or MOGO, however, would be asked to be removed.

Historically, I would say that teams that paint their robots red/blue or other colors similar to field elements have not been asked to change. Adding a non-functional decoration that looks like a Ring or MOGO, however, would be asked to be removed.

I will editorialize a bit further and give props to the GDC for this well-thought and reasonable rule application. A team using a Vision Sensor shouldn’t be able to claim to a ref/inspector that a typical VRC robot’s paint job is interfering with the Vision Sensor any more than that team saying, “Well our opponent is wearing Blue shirts and that messed our Vision Sensor so they should be DQ’d”. While still leaving flexibility to the Head Ref/Inspector for prohibiting obvious examples of “decorations” meant to disrupt use of the Vision Sensor.