This is the robot I made and went to world with.

It is crab drive with a 360° rotating tank outtakes on top. It cannot be taken apart, it was built with locknuts in the oddest fashion ever.

The drive is made up of 4 swivel compartments, each with it’s own motor to power the wheel. The swivels are turned by 2 servos, one on each side. Two swivels are chained together so as to work with one server.

The arm is turned by one motor, with loose wires so as to allow turning, stabilized by the four wheels seen. Rubber bands to counteract the arms weight when lifting for faster lifting. an tank intakes/outtakes.

It did ok, the design was to allow scoring from any direction. Turned out to be a better defender. 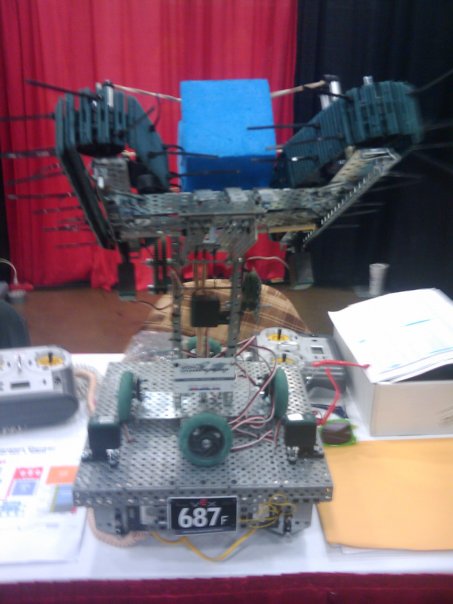 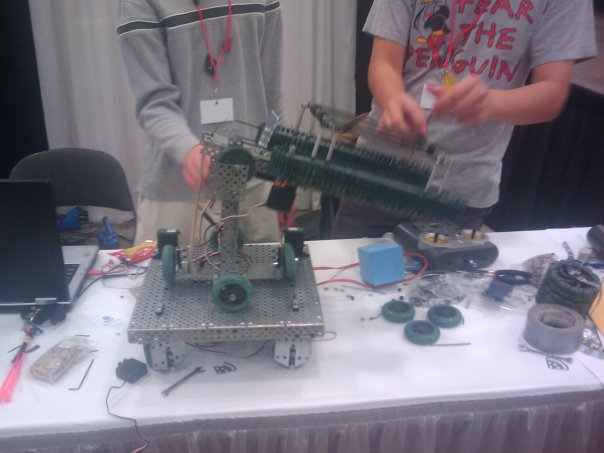 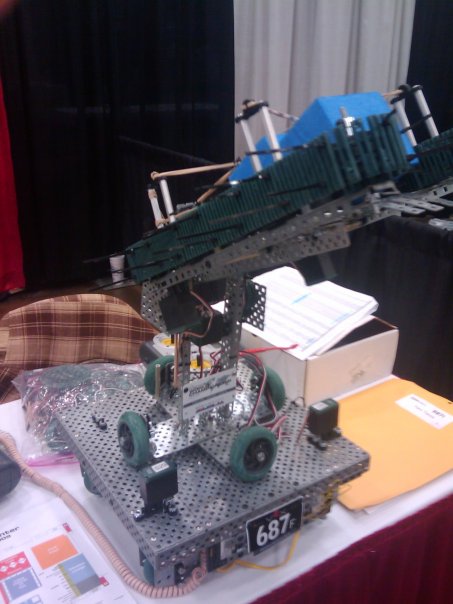 Hmm, sounds like a pretty neat idea. Your website is being reviewed so I cant’t see the pictures. Did you use vex servos or 3rd party ones?

Sorry, Norton Antivirus is picking up 3 computer threats when I try to go to your site.

Sorry to both of you, I removed the link and uploaded the pictures.

It uses vex servos. This is the robot I used at the VEX World Championships, so it’s all vex.

254 was experimenting and thinking about building crab drives for Clean Sweep, but we decided to build more conventional drive bases due to the programming, driving, and mechanical complexities inherent in a crab drive.

I haven’t seen any teams this year with crab drives, but a successful crab drive seems to be a viable solution to this year’s challenge.

Crab Drive is definitely way cool. The only thing that i see that is wrong with it is that it is hard to drive. I remember seeing a FRC team using a potentiometer with what looked like a rotary phone dial on it and when they would turn the dial the wheels would turn with it. With vex you don’t have the luxury of being able to use different controls so it is a bit more difficult (maybe not so much if you used servos though). The other thing that i see with it is that there are simpler ways of doing a drive with the same capabilities. Holo drive is one option requires so programming know how and is not too tricky to build and only requires 4 motors, Slide drive is pretty good very simple to build and fairly easy to program but sucks up 5-6 motors. I think the one big advantage to crab drive is that you can drive at full power in all directions which was important for elevation when you could be pushed around but not so important this year. With holo drive when you drive diagonally (for an X style holo) you are only using 2 motors and with slide drive when you drive side to side you are only using 1-2 motors depending on your setup. with crab drive you are using all four drive motors while driving in any direction.

I attempted building a Crab Drive Chassis once.

I never finished writing steering code for it, in part because I was disappointed that the individual servos that rotated each wheel weren’t able to point the wheels in a given direction consistently (Same input would result in noticeably different directions on two successive attempts).

Has anyone ever made teeny-tiny mecanum wheels for a VEX robot? Maybe this would be a good summer project.

Has anyone ever made teeny-tiny mecanum wheels for a VEX robot? Maybe this would be a good summer project.

Someone did work on that during the last 18 months or so. A well chosen suite of search terms should find the thread (Or maybe the thread was on Chief Delphi?).

Someone did work on that during the last 18 months or so. A well chosen suite of search terms should find the thread (Or maybe the thread was on Chief Delphi?).

, specifically [https://vexforum.com/gallery/showimage.php?i=1721&catid=searchresults&searchid=401623. Not exactly teeny-tiny though.](https://vexforum.com/gallery/showimage.php?i=1721&catid=searchresults&searchid=401623. Not exactly teeny-tiny though.)I was remembering the set psycoklown made - They, along with the larger set made by Chuck Glick, show up in the set of pictures shown when your first URL is invoked.

Thanks, guys. I’d forgotten all about these. It would be fun to play with a set, but those that Chuck made are clearly too expensive to produce for VEX.

I like your wheel compartments gblake are a lot better then the swivel kits.

While the crab drive is a great type of drive if programmed correctly(and my team member reporgramed it to one joystick drive) it is very very touchy. One slow motor and it will not go strait. Thus why we didn’t do very well at world, we had 3 different powered motors. I fixed the servo problem by chaining two wheel compartments together.

Learning from that, my team this year built a drive that used 4 omni wheels that could move in any direction. But yet again a new flaw, it was too slow, and we didn’t have the parts to gear it for speed(if the motors could take it)

Do you think vex will bring in those wheels you posted?

I like your wheel compartements gblake are a lot better then the swivel kits. Could they hold motors too?

Do you think vex will bring in those wheels you posted?

The 2nd picture shows how the motors attached directly to the crab’s wheels.

Vex already sells the crab wheels I made (as various separate parts), just buy all of the parts and put them together.

If you are asking about the mecanum wheels - I don’t know.

Yes, I had edited the post after, remembering that I saw wheels, you replied too fast xD

I meant the mecanum wheels.

Yes, I had edited the post after, remembering that I saw wheels, you replied too fast xD

I meant the mecanum wheels.

If you would like to see mecanum wheels in the VEX product line, you might post it in the “Ideas for new products” forum here: https://vexforum.com/forumdisplay.php?f=37. The VEX product planners **do **read that forum. I can’t guarantee you will get mecanum wheels, but I do know that the right people will know someone is asking for them.