Custom Stock-bot game for summer camps and off season

I am planning a summer camp, and instead of building a clawbot, which offers very few transferrable building skills, I wanted to design a game and robot with the following constraints:

Students will be provided with the following:

The Game: It should be noted that this game is intended to be enjoyed by any level of driver as a chance to practice driving and drive-team-coaching, with a set of supplies that already exists in many robotics programs that don’t toss out old game pieces. 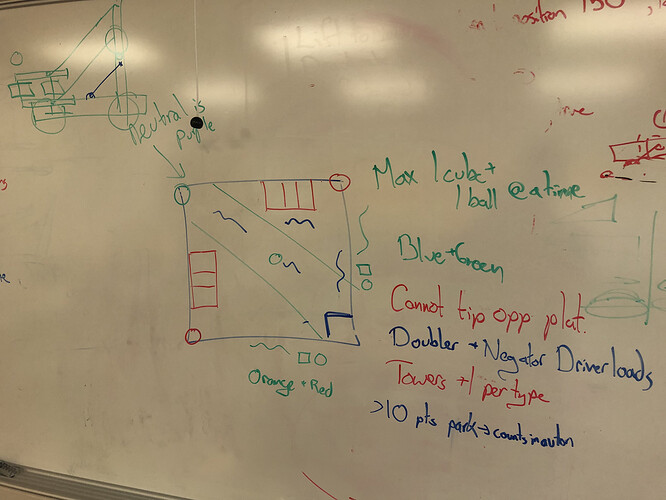 The game is played with the balls from Change Up and the cubes from Tower Takeover. However the cubes have masses added to them to make them much heavier (~1lb or more). Bots are limited to carrying one cube and one ball at a time. Plowing more is legal, as it is not “carrying”.

The field has two TiP platforms with extra polycarb glued in to divide it into three sections. There are 4 TT cups mounted at three corners and in the middle. There is a TuP Platform (single one) in the corner for a parking bonus. There are two diagonal lines (shown in green) to define the autonomous neutral zone (middle) similar to the last few years games.

Scoring: 1pt per game element (maybe 2 per cube if they turn out more interesting) scored on the platform. TT rules for game pieces in the cups. Orange cubes only affect orange cubes. Red Balls only affect red balls. Parking is >10 pts. Teams are given two driver loaded modifiers, a black cube (Negator) and a white ball (doubler). They can place these in one of the three segments of either platform to make everything in that section count for double (doubler) or not count at all (negator). They can be introduced at any time, and can be descored.

All jokes aside, this seems fantastic conceptually. Presumably, the idea is the game is restricted to the Stock-bot with only software customizations?

While potentially more than double the effort on your part, designing 2 Stock-bots that present strategic differences in capabilities could allow teams to go thru an evaluation-decision phase before building.

Having one with a vertical tray and a lower drive speed for picking up and placing things vertically with more precision, vs the higher speed traybot for putting up big numbers, but being unable to descore or empty cups well. Interesting. Def something to look out for.

There is a group of students in Brandywine BOTS that are doing a similar thing for a one week camp. Their constraint is only having about 3 hours a day for the roboteers to build / compete. I’ll point your effort out to them for their planning.

From experience any game with a ball is hard since the balls tend to really skitter away from the robot. The game elements from this year are good since they don’t roll.

Looking forward to seeing what the final rules are and what the goals look like.

Given that we have hilarious amounts of old vex parts, I designed with those old parts in mind. All I need to do is glue on some polycarb and put weights in the cubes.

Feel free to direct them this way, the more help I have in developing this… the less work it takes.

I am planning on hosting an intro event by having new students use robots similar to Moby and playing Tipping Point without rings or branches - just the mobile goals. Quick and easy to learn

Given that we have hilarious amounts of old vex parts, I designed with those old parts in mind

Yep, I have a ton of the smaller elements around, oldest being the cubes from Elevation. The bigger things I toss. I may keep the ringlets from this year’s VRC game, they would be fun to move for the VEXIQ robots.