Hi guys, so my team have come up with an idea to use the cylinder vertical expansion limit to have some sort of large backboard that extends at the start of the game so that we can block discs from going in the opponent’s goal. I can’t find anything in the game manual specifically against this but it feels like it’s against the rules. Anyone know if this is allowed?

As long as you exactly follow rule SG6 it is allowed. 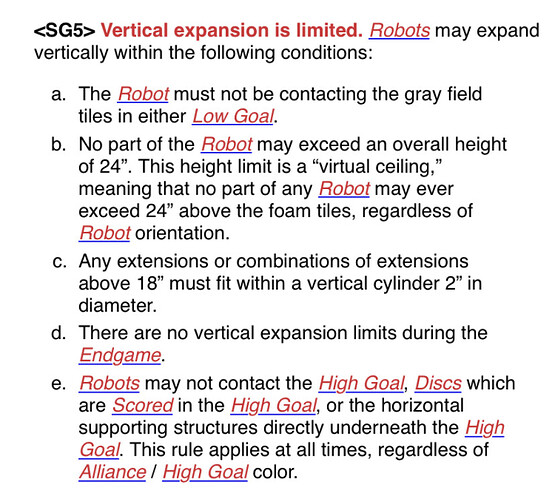 SG5 B states that “No part of the Robot may exceed an overall height of 24”“, and SG5 C states that “Any extensions or combinations of extensions above 18” must fit within a vertical cylinder 2” in diameter”. While it is possible if you comply with these rules, the usability, in my opinion, isn’t enough to warrant building it. You’d need to position the blocker in a specific spot to block the disks.

You are able to expand vertically if you are not in the low goal. Also, anything the rulebook does not prohibit is legal.

Nope. It sounds legal to me. Good luck with that, and thanks for reading the game manual. Remember that the manual provides restrictions, so if something is not pronounced illegal in the game manual, it can mostly be considered legal.

Does it go outside of the 18x18x18 limits? Then it is not.
Otherwise, probably a green light.

Most of the limits are 18x18x18 however there is also a 24" tall 2" diameter cylinder centered on the robot, so there could be board with a small column in the center, idk how well it would work, but it could work, theoretically. I hope this helps y’all!